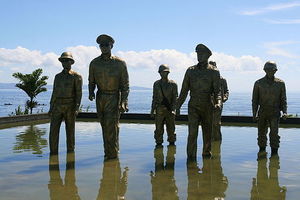 Tacloban is my city. I grew up directly facing the Pacific Ocean, on the Philippines’ eastern shore, which takes the brunt of the yearly monsoons. Geography and history provide the textbook nickname of Leyte and Samar, the provinces hardest hit by Haiyan: “The Typhoon Path.”

I grew up with the natural signs of storms: cockroach hordes marching out of cupboard lairs as if in warning; cockpits losing roosters that preferred to perch on roofs than fight; the still alertness of lizards as winds rise; and the epic hooves of the rain on windows, coming from the ocean gods.

Always, after the rains on Juan Luna Street, there was the great communal cleansing, children, housemaids and busybodies sharing stories; the familiar howl of Bruce Lee, our cowardly dog; the usual flooding of our walkway that doubled as a pigpen, housing a single hygienic pig owned by our neighbor Mano Bading, whose love for his pig we tolerated because we would eat it at fiesta; the examination of debris — clotheslines, buckets, cardboard election posters falling off a corner store, where we got our i.o.u.’s when typhoons hit, racking up our debts in Spam, Hunt’s pork and beans and rice.

Amid the drowned bodies, the country’s president, Benigno S. Aquino III (known to all as Noynoy), arrived on Sunday, two days after the storm, to survey the damage. Earlier, Mr. Aquino had expressed doubts about the province’s readiness for the typhoon: “Tacloban was not that prepared, shall we say, compared with other areas,” he said from Manila, the day after Haiyan hit.

But the people of Tacloban, looking for signs of life beneath the matchstick rubble of their ephemeral homes, didn’t need to hear finger-pointing about governance. Women are still looking for their dead babies. Sons are searching for drowned fathers.

Sleepless relatives, looking for clues, scour strangers’ videos showing the dazed along the Maharlika coastal highway from Tanauan to Palo. “Zombies,” as online comments describe them, in search of food and shelter — though not blood.

I, too, kept looking, for shadows of Dean, my brother, for the house on Juan Luna Street. I paused video for street names, store signs, roads that might end up with Dean — places I might recognize but did not. I kept ending up on other people’s tragedies for days, until I heard from Dean. Most of all, I heard the enraged anguish of my people, who appealed for order, but in the vacuum of leadership that marks this disaster, where should they begin — the mayor’s office? The national agencies? International relief brigades?

Politicians’ faces were on signs; but on the streets, there was no help in sight.

Our corner store’s election posters used to carry names as familiar as the storms. Tacloban is still run by relatives of Imelda Marcos, the former first lady whose lifestyle plundered the nation. Her nephew Alfred is the town’s mayor. His cousin Ferdinand Martin (named after his uncle, the deposed dictator Ferdinand Marcos) is the city’s congressman. Imelda, the “Rose of Tacloban,” is now 84 and reportedly had no idea that a storm hit her native city. She’s the insensate aunt of the clueless mayor — a Filipino soap opera of infinite impunity. And in an ironic twist, the current president is the son of a murdered martyr, Ninoy Aquino, who was assassinated on the Manila airport tarmac in 1983, allegedly by Imelda’s henchmen.

The island of Leyte has always attracted opportunists. Magellan washed up in the Philippines in 1521, and islanders later killed him. Tacloban’s patron saint, the Holy Infant, Santo Niño, is a relic of Magellan’s legions, and graces the surge-shattered church that still survives by the blasted plaza.

The Santo Niño shrine, battered but unbowed, is said to be on the site of Imelda Marcos’s childhood home. In a haunting picture recycling through Facebook, the Holy Child’s bright face guards a dead woman, her hair awry, beneath a banana-leaf body bag at the shrine. Outside Imelda’s splendid apartments with goods safe from looters, a mother of Tacloban bleeds.

Before President William McKinley began explaining what benevolent assimilation of the Philippines entailed, before the Philippine-American War of 1899-1902, Tacloban was already in America’s column. In 1901, officials in Leyte, reporting to the first governor-general, William Howard Taft, wrote of “the intense interest manifested among the masses to acquire a knowledge of the English language.” In a 1901 revolutionary battle in Balangiga, a historic town that Haiyan has devoured, Filipinos raided the American garrison — but Tacloban remained pacifist. Gen. Jacob H. Smith, who ordered his troops to make the island “a howling wilderness” and was later court-martialed for the butchery of Balangiga, held firm sway in Tacloban.

My favorite hotel, the charming, antique Hotel Alejandro, which was submerged last week, was used by MacArthur, in the run-up to America’s victory against the Japanese that cost thousands of Filipino lives, whose wartime efforts are still unrepaid.

This history of surrender to awesome forces marks my city’s story. It’s easy to understand why. Surrender and its twin, oblivion, are how we Filipinos have survived.

At times our choices for survival are clever — like the learning of others’ tongues, a resilient ruse in unsteady times. But in our resilience, we also make our doom. We rage at politicians’ self-serving blame of their inept governance. But governance is the point. It is easier, after all, to blame nature for the thousands of dead rather than on the choices we make — of incompetent leaders trailing a family history of unpunished plunder, of our continuing pillage of our forests, of our clinging to Western allies that spurn our demands for a forceful response to climate change.

On Red Beach, America will soon rumble onto Leyte’s shores with its ships, returning, like MacArthur, to Tacloban’s rescue, on the heels of a planetary emergency for which it feels no guilt or will to fix.

History is our tsunami, and in our seaside shelters, we keep watching the tide return, waiting for our cleansing as bodies drown.

Gina Apostol is the author of the novel “Gun Dealers’ Daughter” and an English teacher.