Silenced Without Proof: On Soft Censorship 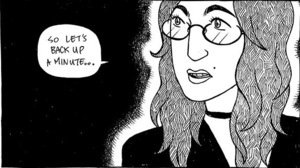 In the following essay, Best American Comics series Founding Editor Anne Elizabeth Moore discuses the negative but widely felt impact of soft censorship. She worked with illustrators and artists on three graphic narratives presented here: But That’s Not Censorship!, Censored, and The Amazing Adventures of the Censor-ship!

Of the several times that work commissioned from me has been withheld from public view upon completion due to its content, only twice has it felt like censorship. Since I can’t be the only cultural producer to fail to name the mechanism of their own silencing in the moment, this sets up an interesting possibility: that the suppression of political expression by figures of authority—a conservative definition of censorship—is not always recognizable.

Now, feelings about censorship are not interesting. The squelching of speech is bad and we are all against it. Yet when feelings keep us from recognizing an event as censorship, they may be limiting public dialogue about what constitutes the right to free expression. Which is interesting: if we do not have a notion of what has been lost, we cannot resuscitate it.

Allow these ideas to fascinate you, however, and you will discover that quantitative data on various forms of silencing are scarce. Censorship is rarely acknowledged by censors unless the press or the law get involved, and everything just short of it—soft, economic, and self-censorship—hardly leaves any evidence at all. In self-censorship, the creator changes or withholds work to respond to perceived threats. Under economic censorship, funds are withheld from certain bodies to suppress the creation or circulation of materials of free speech. And in soft censorship, fears of real censorship may cause creators to suppress their own speech well beyond what censors may have ejected. Work that does appear, if any, is not seen to be lacking, so no proof of silencing remains. Add to this invisible list of grievances the even more ambiguous forms of pressure—requests that go beyond the editorial mandate to allow work to more snugly fit potential balkers’ concerns, the corporate censorship that is the flip side to well-funded publicity and marketing campaigns, social antagonism that leaves certain voices always unheard in certain venues, and the failure to allow particular bodies of people access to the education required to imagine cultural products in the first place—and what you are left with is a really long, but totally blank, piece of paper. Reading it over gives you the vague sense that the world would look quite different if freedom of expression were genuinely guaranteed, but you will also be left with no picture of what it would look like.

In 2011, I drafted a survey with the Ladydrawers Comics Collective to suss out the scope of censorship and other forms of silencing in comics in the US, a relatively small field of media I’d worked in for over a decade. I had seen often that women and nonbinary people were rarely given the same opportunities as male creators in comics; I suspected that the work they did publish was influenced by the same forces that kept publishing options in check. I had also accrued a handful of mysteries to follow up on: books that had disappeared from shelves, or creators that had disappeared from books. Creators that had just disappeared!

As a part of the Chicago-based comics collective, I began gathering data, but also stories. From a creator who gender transitioned and never had work published again. Another who was publicly shamed and felt forced into retirement. A female artist who was wildly successful (!) but whose romantic relationships with men suffered from their jealousy. She, too, stopped making comics. Patterns began to emerge; new lines of inquiry arose. After our work was published in a monthly series on Truthout, I was approached by a comics collective in Europe to implement a similar project there. I leapt at the chance.

This July, members of the Ladydrawers, Femicomix Finland, and individual male, female, and non-binary creators from many pockets of the globe gathered at the Saari Residency in Finland with the generous support of the Kone Foundation. Following up on two years of work on a ten-page survey I had drafted, translated by this same collective supergroup into Latvian, Spanish, German, Finnish, and English (other translations have not yet been completed), we collated responses in English and began working the numbers. These were organized into data sets, the data sets written up as scripts, and the scripts turned into comics. All during two incredibly intense weeks that we felt lucky to have. It’s important to note that funding for this project could only have come from Finland—the only country I know of with a line-item in the national budget to support comics production. (The Canadian government funds comics quite a bit, although among other arts.)

Our ranks included three Americans, an Austrian, three Finns, a German, a Latvian-Canadian, and three Swedes; one of the Americans was a second-generation Korean immigrant and another born in the Phillipines and raised traveling around the Middle East. One of our group identifies as male, another as nonbinary, and the rest as female; all but two identify as white. All identify as queer and at least one as a person with a disability—a crip, to be specific. The questions we explored were deeply influenced by the experiences these identities reflect, and I aimed to design a program that offered autonomy within a collaborative framework in an effort to preserve those influences.

Participants therefore chose roles (math, writing, or drawing) on particular scripts. Daily critiques offered full group input, but researchers, writers, and artists remained free to develop concepts without restriction, so long as data were evident and remained central to the strip. The simplest things presented unforeseen challenges: creating images that read as well in Germany as they do in the US around, say, issues of race is no mean feat. Even a simple illustration of a “typical meal” doesn’t translate directly from Swedish to Korean. As for languages, we worked in English, planning to translate the collection as a whole upon publication, but agreed to let the nuances of non-native speakers’ word choices (in scripts and respondent comments alike) stand, transparent evidence of the range of individual voices involved.

In sum, we worked with 260 total responses, from 24 nations—many in Europe, although North America, Central America, Oceania, and Asia showed up, too. Likely because both anchoring comics collectives are known to support women and non-binary creators, our respondents contained more women than the comics community is thought to at large: 66% of our respondents identified their gender as female; 22% as male, and 12% as nonbinary, trans, or other. A majority of our respondents identified as white, 12% as people of color, and 5% did not categorize racial identity. Only 53% of our respondents identified as heterosexual, and 47% along the spectrum of LGBTQIA. Of those who regularly create comics, 37% stated that their ability to do so had been negatively impacted by health and family concerns. (Less than a quarter indicated they were raising young children in the home; slightly over half stated that a major factor in decreased comics creation was due to a lack of quality healthcare).

With only two weeks together, we barely had time to formulate interesting questions, much less make comics out of them. Yet my priority was to develop a series of strips that visualized and provided data on the range of forces, including access to healthcare, that limit free expression. My team on this strip, however—Hanna-Pirita Lehkonen (FI), Sheika Lugtu (US), Elke R. Steiner (GE), and Fran Syass (US), plus go-to fellow researchers Katharina Brandl (AU) and Verna Kuutti (FI)—faced challenges of our own. Topics of other strips, including race, gender, and economic status, all have internationally recognizable visual cues, like skin color or eyelashes or butlers. Censorship, however, is the absence of visuality, the removal of information. Short of the perhaps overused censor bar, censorship usually looks, in US culture at least, like space filled in with yet another white dude yappin’ about stuff. The visual vocabulary we developed included the recognizable censor bar; a silly adventure comics-inspired Censor-Ship, commanded by aggressive, white, military men who blot political speech with ink shot from canons; and a panel on censorship in comics that was inspired by true events and filled out with anecdotes culled from our survey.

That there are few recognizable visual cues associated with censorship is one reason the topic receives such short shrift in our brand-focused, social media-infused culture. Another is that the topic is nearly impossible to address with objectivity, a concept particularly beloved by those who impose limits on speech and speakers: if a censoring body refuses to “balance out” a censored creator’s tale, even allegations of censorship can quickly be silenced. This situation can be reversed, too: creators often feel silenced when editors suggest changes to work, even when the changes were intended to improve it. Silencing seems a wholly subjective experience.

We decided to embrace it. So did our respondents. Several supplied friends’ names when the opportunity arose to name a favored creator (and admitted it), some supplied their own (and admitted that, too). More than one, it appeared from responses, completed the survey drunk; many made jokes in lieu of supplying concrete data. A handful chose to complete the survey in a non-native language, even when a survey was available in their native language. German speakers, for example, who completed the survey in Finnish, or Finns who filled out the English version. All subjective choices that we could not explain, and saw no reason to. We strove, instead, to own our subjectivity, and to use the information provided us, however unusually obtained. (We even have an unpublished strip on this.)

The trio of strips presented for Banned Books Week offers a tiny, subjective peek at our findings on who creates comics around the world, who doesn’t, and why not. My goal, of course, is to spur further questions, for isn’t that, in the end, the best possible response to silencing?