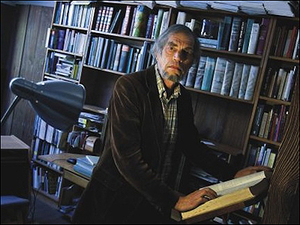 I’m pretty good at keeping secrets, but I hate doing it, especially when the secret is something I want the whole world to know. It was particularly hard to resist the temptation to reveal the identity of the secret donor behind the PEN Translation Fund, which in the nine years of its existence has supported something on the order of 100 book translation projects, many by younger translators just starting out in the field who do not yet have publishers for their work. These grants are highly competitive, and many have resulted in publication of the books in question; they launch careers, and thereby encourage talented newcomers to the field to pursue careers in translation. The two grants I received from the Fund in an earlier phase of my career when I was supporting myself mainly as a freelance translator went a long way toward encouraging me to continue in the field. When I was invited some years later to serve on the Advisory Board that recommends projects for Translation Fund grants, I was thrilled by the quality of the work submitted by so many of the applicants; in any given year, there are many more worthy projects submitted than can possibly be funded. And where did the endowment that made these grants possible come from?

Esther Allen—who was serving as Chair of the PEN Translation Committee in 2003 at the Fund’s inception—recalls:

I first met Michael Henry Heim in the spring of 2003. He had contacted me by e-mail a week earlier and asked me to set up a morning meeting at the PEN offices. I was very much aware of his work, but had never before had any contact with him. He came to that meeting straight from the airport; he had just flown in from L.A. on a red-eye.

He announced to PEN’s executive director, chief of development, and myself (all three of us meeting him for the first time that day), that he was deeply concerned about the situation of translation in the United States, and intent on doing something about it. He had just turned 60, he said, and that had started him thinking about what the most effective thing might be.

He had decided to establish a fund at PEN American Center, with a donation of $734,000, so that PEN could begin giving grants in support of translation.

He was enormously embarrassed at the thought of being publicly associated with the donation, and insisted on complete anonymity. Mike had a visceral horror of money, which he associated with excess and waste and all of the things he most deplored. He explained that the money was the accrued earnings from the investment of the death benefit that his mother received in 1945, when his father, a Hungarian composer and pastry chef who was serving in the U.S. military, was killed in an accident at a military base; Mike was just a toddler at the time.

Michael Henry Heim passed away on September 29 at his home in Los Angeles, and his wife, Priscilla, has now given permission for us to reveal the source of this gift that has done so much good for so many translators. News of the PEN Translation Fund donor’s identity was broken earlier today on the Three Percent blog.

Mike and Priscilla Heim chose the PEN American Center as a repository for the Fund because of PEN’s longstanding commitment to supporting writers, and they helped to craft a structure for the grant-giving process that will allow the Fund to exist for many years without being exhausted. This is a gift designed to benefit generations of translators. We owe both Heims an enormous debt of gratitude.