Oleg’s Freedom and What’s Next for Prisoners of Conscience 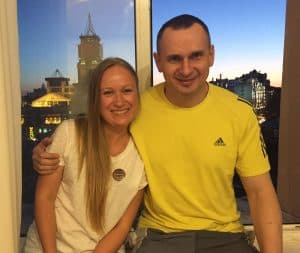 This fall, after five years in isolated Russian prisons, Ukrainian filmmaker Oleg Sentsov was released. Our Eurasia project director Polina Kovaleva met with him in Kyiv shortly thereafter. In this PEN Q&A, Polina reflects on meeting with Oleg, what his release means for other political prisoners in the region, and what PEN America Members and supporters can do to help.

What did you expect to happen when you met with Oleg for the first time after his release?
We met in Kyiv on a sunny afternoon just a week after he landed at Borispol airport on a plane with other freed Ukrainian political prisoners. The first thing he did was hug me. I realized how big he is in reality, and it was such a relief, especially since he’d endured a painful hunger strike just a few years ago.

I was touched by his desire to thank all his supporters without any delay. When I suggested a video message for our Members, he said he will do it only in English because it’s disrespectful to his supporters to use his own language (even though he is not yet very comfortable speaking English). He is a tough man, but seeing him with his daughter was such a joy—he is a caring dad who loves his kids more than anything else on this planet.

What has Oleg done in these first few months?
Oleg has already met with French President Emmanuel Macron and the head of Council of Europe in Strasbourg, as well as the current Council of Europe Commissioner for Human Rights Dunja Mijatović. He presented his book at the Frankfurt Book Fair, met filmmakers Wim Wenders and Tom Tykwer in Berlin, visited Polish film directors Agnieszka Holland and Dariuz Yablonsky in Warsaw, met the President of PEN International Jennifer Clemence, and chatted with former Polish president Lech Wałęsa in Gdansk. That’s just a short list of all the people he’s met to thank.

But he’s not just doing these trips to show gratitude. Oleg understands very well and wants to remind leaders that even though he was part of a swap that returned some 35 prisoners, there are still hundreds of Ukrainians in Russian prisons being held on spurious charges. It is particularly precarious because many of the well-known political prisoners have been released, meaning that those currently detained are mostly unknown to the general public.

Before Oleg’s release, you were crisscrossing Europe yourself advocating for political prisoners across the region.
Yes, the campaign for his release was always linked to the broader campaign to free those being persecuted for exercising their free expression rights. Even when it seemed we were silent, we were always cooking up new ideas for pressing for his release and the release of others.

While in the U.S. Ukraine is in the headlines, European leaders have been experiencing Ukraine fatigue. Part of my trip was about reminding diplomats and politicians about the unsolved cases and growing human rights violations related to the Russia-Ukraine conflict. The number of media outlets in Crimea has fallen by a factor of 10, leaving behind just pro-Russian media. That means there’s a stranglehold on free expression in the region. And it doesn’t appear to be getting any better.

What other cases are you monitoring in the region?
There are two RFE/RL contributors who are being held in Donbas by pro-Russian separatists. One of them, Stanislav Aseyev, was prosecuted by a totally illegitimate “court” by self-declared authorities in Donetsk and now faces a 15-year prison sentence. The other, Oleh Halazuik, is being held hostage and his location is currently unknown.

In response to the lack of independent media in Crimea, a group of relatives of illegally imprisoned Crimean Tartars began documenting and sharing news and human rights violations in the region. Russian authorities have now targeted that group, Crimean Solidarity. Eight of its citizen journalists are now either in prison or awaiting trial.

Was Oleg’s release just a one-off?
It will depend a lot on the new Ukrainian leadership. The recent exchange of Ukrainian political prisoners was a victory for Ukrainian President Volodymyr Zelensky, but it remains to be seen if it’s a prelude to more releases. The scandal with President Trump doesn’t help matters.

What can supporters and PEN America Members do?
We can certainly follow Oleg’s lead. Even from prison, he never stopped raising the issue of releasing all political prisoners—not just himself—and relief for all victims of Putin’s rule, including Russians themselves. We should all keep speaking out until every unjustly imprisoned person is release. It’s our duty as writers, journalists, and artists to protect free expression.

In today’s world, no matter the desires of some autocrats, we cannot separate the problems of other countries from our own. The disease of authoritarianism is spreading fast, and only attentive, mindful collective action can stop it from destroying our shared humanity.