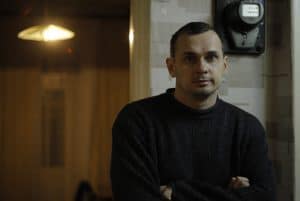 Oleg Sentsov, a Ukrainian film director, was detained in Crimea in May 2014 and sentenced to 20 years in a Russian prison on charges of terrorism on August 25, 2015. Appeals against the original verdict were rejected by the Russian Supreme Court in November 2015 and June 2016. A request for Sentsov’s extradition to Ukraine was denied in October 2016 on the grounds that he had become a Russian citizen upon the annexation.

On May 14, 2018, Sentsov declared an indefinite hunger strike, stating that “the one and only condition for its termination is the release of all Ukrainian political prisoners that are currently present on the territory of the Russian Federation.” On October 6, after hunger striking for 145 days, Sentsov was forced to end his hunger strike, under the threat of being force fed by authorities.

On September 7, 2019, Senstov was freed from a Russian penal colony after more than five years of detention and concerted calls from free expression groups and governments as part of a historic prisoner swap between Russia and Ukraine. He was one of 35 Ukrainian citizens that returned home, reuniting with his daughter in Kyiv, while his mother and son are still in Crimea. He continues to fight for freedom of expression and freedom of other Ukrainian political prisoners.

Oleg Sentsov is the winner of the 2017 PEN/Barbey Freedom to Write Award.

January 2020: PEN America organizes a trip for Sentsov to Washington, D.C. to meet with members of Congress and other high-level officials on his campaign to free Ukrainian political prisoners illegally held in Russia. 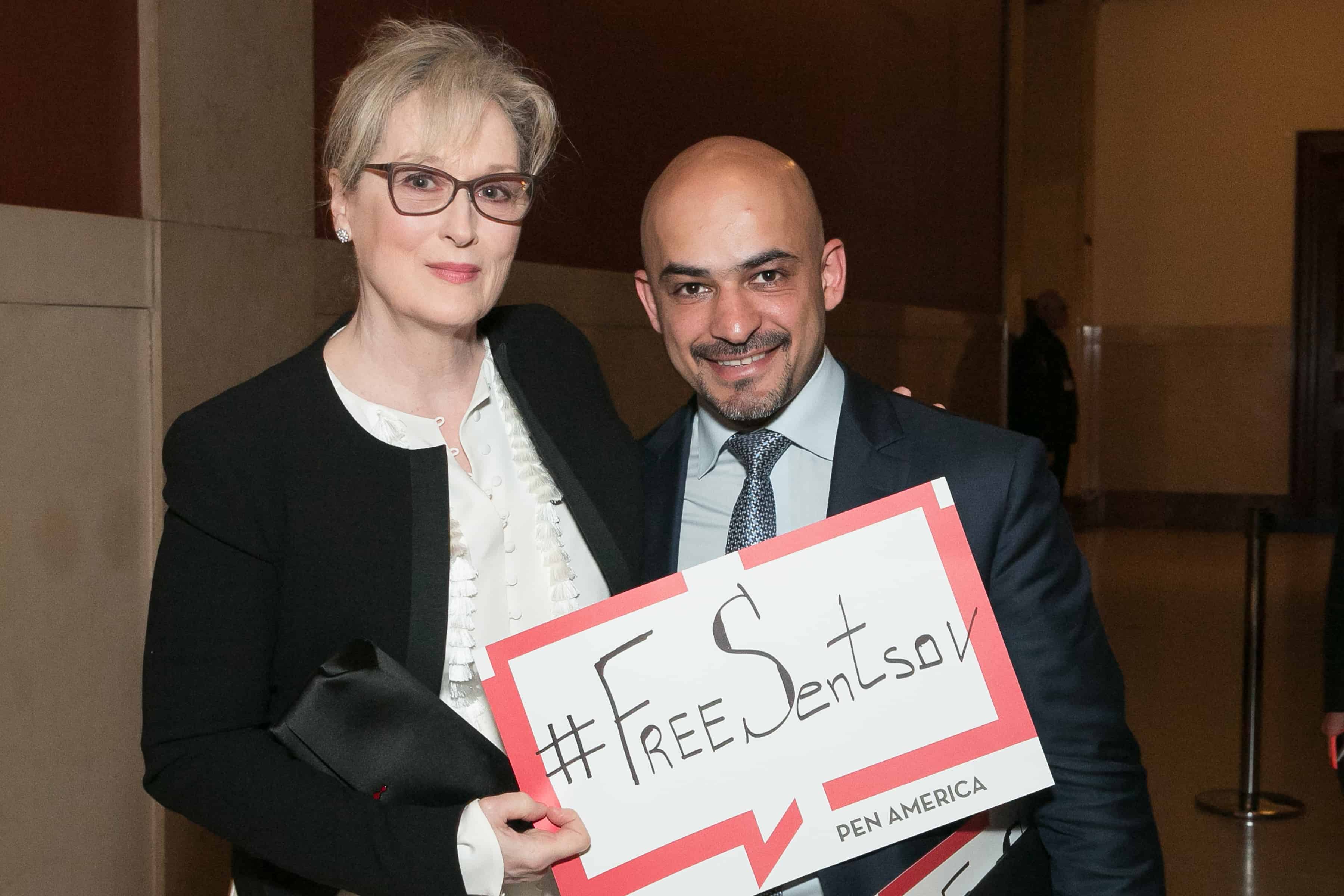 June 1, 2018: PEN America releases an open letter demanding that President Putin immediately release Sentsov in light of his hunger strike, which is signed by over 50 writers, artists, journalists, and activists.

February 26, 2018: On the Day of Crimean Resistance to Russian Aggression, PEN America and a number of partners around the world express their support for Oleg Sentsov with leading a Global Day of Action that includes readings, rallies, and special events across the globe. Actions have taken place in 24 cities across 16 countries. The hashtag #FreeSentsov has been used by partners around the world on social media to show their support.

Best known for his 2011 film Gamer, Sentsov lived in Crimea’s capital of Simferopol and was active in protests against then-President of Ukraine Viktor F. Yanukovych, who led a pro-Kremlin government before he was removed from office in February 2014. As Russia took control of Crimea in 2014, Sentsov became an outspoken critic of Putin’s disregard for the sovereignty of Ukraine and delivered food to Ukrainian soldiers blockaded in bases by Russian military.

On May 11, 2014, Russia’s Federal Security Service detained Sentsov in Crimea; he resurfaced a few days later in custody in Moscow. Sentsov was charged along with a co-defendant, Aleksandr Kolchenko, on suspicion of terrorism. During a trial hearing on August 25, 2015, Sentsov said he was tortured in an unsuccessful attempt to extract a confession. He had visible bruises on his body.

Sentsov was found guilty of creating a terrorist group, carrying out two terrorist acts, and plotting the explosion of a statue of Lenin in Simferopol. He was also accused of founding a Crimean branch of a banned Ukrainian nationalist group called Right Sector, which the group, as well as Sentsov, refutes. The key eyewitness against him, Gena Afanasev, retracted his original testimony saying it was coerced through torture. Despite an international outcry, Sentsov was sentenced to 20 years in prison. Many international governments—including that of the United States—believe that he has been convicted on groundless charges in retaliation for his anti-Kremlin views. PEN believes that the charges stem from Sentsov’s political activities, most importantly his outspoken criticism of Russia’s annexation of Crimea, and has expressed concern about shortcomings in the judicial process that led to his sentencing. However, Russian President Putin rejected calls for Sentsov’s release, maintaining that he was not convicted for his art or opinions, but because he had “dedicated his life to terrorist activities.”

September 7, 2019: Senstov is freed from prison after more than five years of detention as part of a historic prisoner swap between Russia and Ukraine. The 43-year-old expresses hope that the remaining prisoners are set free as well, adding that the release of all Ukrainian prisoners does not mean that “our fight” is over.

October 25, 2018: The European Parliament honors Oleg Sentsov with a prestigious human rights award. The Sakharov Prize for Freedom of Thought is named for the Soviet physicist and dissident Andrei D. Sakharov and is granted annually to “individuals or organizations who fight for human rights and fundamental freedoms.” Sentsov is the first recipient of the award from the former Soviet Union in nearly a decade.

October 6, 2018: Under the threat of being force fed by authorities, Sentsov is forced to end his hunger strike on its 145th day.

June 28, 2018: The Parliamentary Assembly of the Council of Europe (PACE) adopts a resolution, whereby it expresses concern over Ukrainian political prisoners detained by the Russian Federation, notably Oleg Sentsov, and calls on Russia to release without further delay all Ukrainians detained in the Russian Federation and in Crimea on politically motivated or fabricated charges.

May 14, 2018: Sentsov begins an indefinite hunger strike, demanding the release of all Ukrainian political prisoners on Russian territory.

October 13, 2017: Sentsov’s lawyer Dmitry Dinze tells Interfax that Sentsov has been transferred to a high-security correctional facility near the town of Labytnangi, in the Yamalo-Nenets Autonomous District. Correctional Facility No. 8, dubbed “Polar Bear,” is home to inmates convicted of serious crimes.

October 2016: Sentsov is moved to a solitary punishment cell for 15 days. The Belarus Free Theatre collaborates with Maria Alyhokhina of Pussy Riot to create a play, Burning Doors, based on the incarcerations of Alyokhina, performance artist Petr Pavlensky, and Sentsov to raise awareness about the prison system in Russia.

Putin continues to reject calls for Sentsov’s release, maintaining that he was not convicted for his art or opinions, but because he had “dedicated his life to terrorist activities.” A request for Sentsov’s extradition to Ukraine was denied in October 2016 on the grounds that he had become a Russian citizen upon the annexation.

September 2016: A year after his conviction, Sentsov smuggles a letter out of prison, stating with certainty, “I know who will win. The desire for freedom and progress is unstoppable.”

August 25, 2015: During a trial hearing Sentsov testifies in court that he was tortured in an unsuccessful attempt to extract a confession. He has visible bruises on his body. Sentsov is found guilty of creating a terrorist group, carrying out two terrorist acts, and plotting the explosion of a statue of Lenin in Simferopol. He is also accused of founding a Crimean branch of a banned Ukrainian nationalist group called Right Sector, which the group, as well as Sentsov, refutes. The key eyewitness against him, Gena Afanasev, retracts his original testimony after claiming that it was coerced through torture. Despite an international outcry, Sentsov is sentenced to 20 years in prison.

May 11, 2014: Russia’s Federal Security Service detains Sentsov in Crimea. After a brief disappearance, Sentsov resurfaces a few days later under custody in Moscow. He is charged along with co-defendant, Aleksandr Kolchenko, on suspicion of terrorism.

“There is no need to pull us out of here at all costs. This wouldn’t bring victory any closer. Yet using us as a weapon against the enemy will. You must know: we are not your weak point. If we’re supposed to become the nails in the coffin of a tyrant, I’d like to become one of those nails. Just know that this particular one will not bend.” – A 2016 letter from Sentsov in prison

“I don’t want my children to live in a country of slaves.” – A 2017 letter from Sentsov in prison, read by his cousin, Natalya Kaplan, who accepted the annual PEN/Barbey Freedom to Write award on his behalf at the PEN America Literary Gala on April 25, 2017

As political constraints tighten on free expression in Russia, divergent views are increasingly unwelcome on any platform. The years of President Vladimir Putin’s dominance have brought Kremlin control to virtually all media outlets and progressively to other cultural spaces and modes of expression, including social activism, scholarship, art, and theater. The result has been to populate the discourse with “approved’’ ideas and raise the stakes on dissent, which most recently accumulated in the ever-returning conversation of censoring and controlling the Internet even more.

PEN America works to aid and elevate Russian writers fighting limits on free discourse and open access to information, including but not limited to hosting independent novelists, poets, and journalists for public events and high-level briefings in the United States, building ties with U.S. literary, cultural, and human rights communities, and publishing a comprehensive report, Discourse in Danger: Attacks on Free Expression in Putin’s Russia.

Screening and Live Event | The Trial: The State of Russia vs Oleg Sentsov

A Filmmaker on Trial: Oleg Sentsov