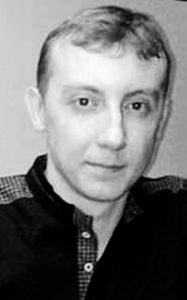 Ukrainian journalist Stanislav Aseyev, who writes under the pen name Vasin, was captured by Russian-supported rebels on June 2, 2017. Aseyev was based in the separatist-controlled city of Donetsk and reported for Radio Free Europe/Radio Liberty, as well as Ukrainian publications Dzerkalo Tyzhnya, Ukrayinskyi Tyzhden and Ukrayinska Pravda.

November 15, 2019: PEN America organizes and observes the Day of the Empty Chair at the Russian Consulate General in New York City to support Stanislav Aseyev. A tradition of PEN activism, the Day of the Empty Chair honors and brings attention to writers who have been imprisoned, detained, disappeared, threatened, or killed. Take action with PEN America and partners around the world to express support for Aseyev.

October 28, 2019: PEN America strongly condemns the separatist-led court’s decision to sentence Aseyev to 15 years in a penal colony. In a press release, PEN America states that the sentence is a “horrifying farce” by the self-proclaimed authorities in Donetsk. PEN America continues to express support for Aseyev’s brave, independent reporting in eastern Ukraine, where it was otherwise nonexistent.

May 31, 2019: PEN America draws attention to the two-year anniversary of Aseyev’s detention despite global international calls for his release, and the intensifying dangers for journalists in eastern Ukraine. In a statement, PEN America calls for Aseyev’s immediate release and the protection of free expression by both sides in the conflict.

July 19, 2017: PEN America releases a statement regarding Aseyev’s confirmed detention by the self-proclaimed Donetsk People’s Republic (DPR), expressing concern over the deliberate targeting of journalists who report on the ongoing conflict in eastern Ukraine. In the statement, PEN America urges the separatists in Donetsk to “release him immediately,” and calls on all parties to “ensure that press freedom is respected.”

Born in Donetsk, Ukraine, Aseyev has worked as a journalist there since the separatist takeover in 2014, reporting for Radio Free Europe/Radio Liberty’s project “Donbas.Realii,” as well as Ukrainian publications Dzerkalo Tyzhnya, Ukrayinskyi Tyzhden and Ukrayinska Pravda. He also had a Facebook blog with five thousand followers. Using the pen name Vasin to escape potential prosecution associated with writing for independent media outlets, Aseyev reported on daily life in the Donbas, describing everything from propaganda and military activities to food prices, culture, and entertainment.

Aseyev also describes the war in the Donbas in his novel, The Melchior Elephant or A man who thought, which was first published in Moscow in Yunost magazine (#1 — #6, 2015), and then in the Kayala Publishing House in Kyiv. Aseyev is also the author of Shestoy Den’ (The Sixth Day), an anthology of poems and short stories, and Anderhil’skiye Ved’my (The Underhill Witches), a play, both of which were written in Russian and published in Donetsk in 2011.

December 29, 2019: After being detained for two and a half years, Stanislav Aseyev was freed as part of a broader prisoner exchange in Ukraine.

October 22, 2019: The self-proclaimed Donetsk People’s Republic (DPR) announces Aseyev’s “sentence” to 15 years of imprisonment in a penal colony with an additional ban on journalistic activity for 2.5 years and restriction of freedom for 1 year.

August 2018: On August 17, a video in which Aseyev allegedly “confesses” to spying is aired on the Russian state TV channel Rossiya 24. Radio Free Europe/Radio Liberty (RFE/RL) calls the confession “highly questionable,” saying “We have no idea when it was made, or under what conditions or duress. We continue to demand that Stanislav Aseyev be released from detention immediately.”

July 2018: As reported, separatists controlling the eastern city of Donetsk charge him with spying to provide his detention with a semblance of legality.

August 2, 2017: Fifty seven members of the human rights organization Svobodnoe Slovo including Svetlana Alexievich, Grigol Chkhartishvili (Boris Akunin), and Lyudmila Ulitskaya sign a petition calling for “publicity and justice” for Aseyev, whose arrest they consider “illegal” and “a violation of human rights and freedoms.”

June 16, 2017: Aseyev’s friend and former MP Yehor Firsov confirms that the journalist was seized by Russian-backed separatists who threatened him with 14 years of prison on charges of espionage. Aseyev’s mother visits him in custody. According to Firsov, Aseyev’s health has deteriorated significantly since his detention: he has lost a lot of weight and has likely been tortured. Firsov also notes that Aseyev has no access to medicine or international organizations which could report on his health. According to Aseyev ’s relatives, the journalist’s apartment appears to have been searched and his computer is missing.

June 2, 2017: Aseyev is reported missing after failing to file his latest blog post for RFE/RL.

On #thePENpod, PEN America's @stephenmfee catches up with writer Fatima Shaik (@FShaik1), who discusses what it was like writing and reporting in the wake of Hurricane Katrina, and how it might be similar to our current situation. LISTEN 🎧: https://bit.ly/2Uxiuvb.

A reminder: You can keep up with everything PEN America is doing amid the #COVID19 crisis here: https://medium.com/@PENamerica/community-amid-coronavirus-a01af72ce129