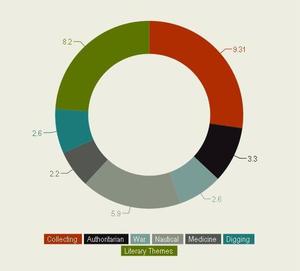 This article first appeared in The Millions.

How do we use language to describe surveillance? As an organization that promotes literature and defends freedom of expression wherever it is threatened, PEN is especially concerned about the effect of mass surveillance on creative freedom. We fought U.S. government surveillance all the way to the Supreme Court in the case Amnesty v. Clapper, and our report Chilling Effects documented that U.S. government surveillance is causing one out of six writers to self-censor their research and writing. We may never know how many ideas are being lost every day because of these programs.

Judges and legislators are increasingly confronted with the need to understand new surveillance technologies, and often resort to metaphor to do so. The Oxford English Dictionary defines metaphor as “a thing regarded as representative or symbolic of something else, especially something abstract.” The use of metaphors can result in quite strange decisions, as Noam Cohen noted in a December 2013 New York Times article, when Supreme Court Justice Scalia tried to illustrate how preposterous it would be to liken a tracking device on the bottom of a car to a miniature policeman hitching a ride in the case U.S. v. Jones. The inappropriate use of metaphors can distract from the fact that real lives are affected by them. “Metaphors in law are to be narrowly watched,” once warned Justice Benjamin Cardozo, “for starting as devices to liberate thought, they often end by enslaving it.”

To better understand how metaphors are being used in coverage of surveillance, PEN embarked on a study of articles by journalists and bloggers. Over 62 days between December and February, we combed through 133 articles by 105 different authors and over 60 news outlets. We found that 91 percent of the articles contained metaphors about surveillance. There is rich thematic diversity in the types of metaphors that are used, but there is also a failure of imagination in using literature to describe surveillance.

Over 9 percent of the articles in our study contained metaphors related to the act of collection; 8 percent to literature (more on that later); about 6 percent to nautical themes; and more than 3 percent to authoritarian regimes.

On the one hand, journalists and bloggers have been extremely creative in attempting to describe government surveillance, for example, by using a variety of metaphors related to the act of collection: sweep, harvest, gather, scoop, glean, pluck, trap. These also include nautical metaphors, such as trawling, tentacles, harbor, net, and inundation. These metaphors seem to fit with data and information flows.

Yet we have also learned that George Orwell’s novel 1984 continues to dominate literary metaphors with respect to surveillance; indeed, it was theonly book referenced in our study. His dystopian work, written in 1948, described a totalitarian state ruled by Big Brother. Nineteen Eighty-Four in some ways describes the repression experienced by our writer colleagues in countries such as Vietnam, Iran, China, and Syria. On our caselist, which we use to advocate on behalf of threatened writers, these countries account for 58 of the 92 writers persecuted for their use of digital media.

But scholars and activists have observed that relating U.S. government surveillance regimes to Big Brother overstates the case, because the U.S. is a more open society than the one 1984 describes and, despite the NSA’s overreach, the country should not be labeled authoritarian. Scholar Daniel J. Solove, for example, pointed out in a seminal article that Kafka’s novella The Trial is probably better suited:

We are not heading toward a world of Big Brother or one composed of Little Brothers, but toward a more mindless process—of bureaucratic indifference, arbitrary errors, and dehumanization—a world that is beginning to resemble Kafka’s vision in The Trial.

Other activists prefer to use Jeremy Bentham’s notion of the panopticon, an institution that allows those with power to create the perception that their subjects are under surveillance at all times. But for journalists and bloggers, the rich variety of literature that has tackled surveillance—from science fiction to modern novels—is rarely invoked. Orwell is the reigning king of the surveillance state.

What do these results mean? The fact that 91 percent of articles contain metaphors suggest that writers will continue to use metaphors to help us understand advances in technology. They also use a diverse range of metaphors. However, as advocates develop new messaging on surveillance and look to literature for inspiration, they should not stop at Orwell: there are many more literary treasures to be explored. The human rights community and, now, private businesses are emphasizing the importance of encryption and digital hygiene to protect against government intrusion. Soon we will need metaphors to explain how these tools work, and how they might be abused.

As security expert Bruce Schneier has observed, people “tend to base risk analysis more on stories than on data. Stories engage us at a much more visceral level, especially stories that are vivid, exciting or personally involving.” Choose the wrong story, and you can overstate the risk. This means journalists should be vigilant in deciding which literature should serve as metaphors.

As we grapple with new technologies and continue our work to fight illegal government intrusion into our privacy, we’ll have to think carefully about how to explain complex, high-tech programs in an easily comprehensible way. Literature is a logical resource for finding metaphors. Aaron Santesso and David Rosen, for example, have shown that the Eye of Sauron in J.R.R. Tolkien’s Lord of the Rings better captures the current surveillance state, but so too do plays by Shakespeare , such as The Tempest. Our study suggests we need better metaphors while not losing sight of the implications of government action that affect real human beings. Meanwhile, we’ll continue fighting bulk surveillancein the courts and promoting legislation that respects privacy and enables creative freedom to flourish.

You can view an interactive report of our study here.

TONIGHT: We join a powerful cohort of mis/disinfo experts and civil society organizations including @CommonCause @UltraViolet @UCSUSA to discuss best messaging strategies for fighting election disinfo in the lead up to November's midterms. https://bit.ly/3ueMQnZ

This is an absurd and unacceptable case of prior restraint--the injunction should be overturned immediately and the @HeraldTribune free to publish their reporting. #pressfreedom https://twitter.com/uspresstracker/status/1538952321639538689