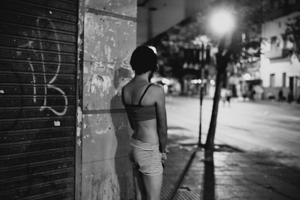 Andrea Labinger is the recipient of a 2014 PEN/Heim Translation Fund Grant for Gesell Dome, by Guillermo Saccomanno. Read an excerpt of the translation here.

September 2012. I’m sitting on a sofa in a Buenos Aires living room, nibbling empanadas and looking around at the circle of literary luminaries surrounding me, all of them fiction writers, many of them friends. They’re buzzing excitedly about a new book, a copy of which sits in nearly everyone’s lap. The cover is stark: a desolate, windblown landscape in various shades of brown, a lone house enveloped by forest. Slashed across the cover, in a bold, white, graffiti-like scrawl: Cámara Gesell. Guillermo Saccomanno. Novela. What book is this? What’s the attraction? I’m about to find out.

There’s no problem acquiring a copy of Cámara Gesell, copies of which crowd the shelves and display cases of every bookstore in the city. I discover that the author, Saccomanno, has twice been the recipient of the Dashiell Hammett Prize for noir fiction and is a prolific, award-winning writer in his native land, one whose work has been translated into many languages – except, astonishingly, English. From the very first sentence, an homage to Baudelaire’s Les fleurs du mal (“Tonight, hypocrite reader, my double . . .”), Gesell Dome—the English title I eventually chose for the translation—draws the reader into a world of greed, lust, hypocrisy, envy, racism, and social inequity in an Argentine seaside town. Villa Gesell really exists; indeed, it has been Saccomanno’s home for several decades. Although the incidents depicted in this tale—allegations of widespread childhood sexual abuse; an alleged Nazi past; the burning of a Bolivian baby; the construction of massive “twin towers” that threaten the healthful environment that draws tourists to the Villa in the first place; rampant violence; a thoroughly corrupt local government—are by no means for the squeamish, the brutal honesty and sensitivity at its heart make it irresistible, at least to this reader, as it opens the door to speculation about many dark chapters in Argentina’s not-so-distant history. “In a country that had concentration camps,” observed Saccomanno in an interview, “one cannot look the other way.”

Now that I’ve been entrusted with the task of translating this epic work, I find the challenges posed by Saccomanno’s language equally irresistible. Peppered with lunfardo (Argentine street slang) and the enigmas of vesre (the practice of inverting syllables to form neologisms), as well as an abundance of cultural references to the criminal underworld, the text often presents knotty linguistic problems, for which I am fortunate to have the invaluable assistance of a native informant and friend, Argentine novelist Alicia Plante. As I sit before my computer screen each day, it’s a (perverse) joy to slip into the skins of the myriad characters who populate this abundant novel, to speak in their voices and occupy, albeit momentarily, their place in the universe. Above all, it’s a thrill to introduce Guillermo Saccomanno to the English-speaking world.