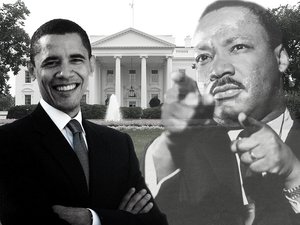 As we celebrate Martin Luther King, Jr. Day, it’s worth remembering not only King’s activism but also the actions by our own government to suppress his vision. His achievements despite abuses by American state power become all the more remarkable and implore us to prevent such repression from happening once more.

King attracted millions to his human rights campaigns—and invited the watchful gaze of the FBI as a result. FBI Director J. Edgar Hoover spent significant resources monitoring King’s movements and eavesdropping on his communications. In one especially lurid episode, agents sent King an anonymous note castigating him for his extra-marital affairs and implying that he should commit suicide. Journalist and author Betty Medsger chronicles Hoover’s obsession in her gripping new book The Burglary: the Discovery of J. Edgar Hoover’s Secret FBI:

Hoover’s attitude toward King can be described as a nearly savage hatred… The plot involved office break-ins, use of informers, mail opening, wiretapping, and bugging of King’s office, home, and hotel rooms.

This was state surveillance at its worst: the jackboot at the end of the FBI’s COINTELPRO program, a secret initiative from 1956 to 1971 that aimed to disrupt anyone deemed subversive by the government, and by Hoover in particular.

There is no doubt that President Obama draws inspiration from Martin Luther King, Jr. and has sought to emulate the laudable qualities of the Civil Rights leader: you can hear it even in the president’s speeches, which move with the cadence and rhetorical flair of a minister. Obama specifically referred to the FBI’s war on King in his speech on Friday detailing surveillance reforms. But it makes little sense for the president to open the door on the deeply flawed surveillance program that plagued King while making cosmetic reforms to his own far-flung surveillance program.

Of course, surveillance by intelligence agencies today has moved from analog tape and wiretapping to the level of bits and bytes, so it’s risky to analogize too much. But it is appropriate to examine what gave rise to the COINTELPRO program in the first place: a lack of accountability and transparency. Officials at the time swiftly condemned any excesses as exceptions to the general rule. In fact, Medsger’s book details that, in 1970, then Assistant Attorney General William Rehnquist denied under oath that surveillance of Americans was taking place and argued that “isolated imperfections” should not “obscure the fundamental necessity and importance of Federal information gathering.”

Sound familiar? In his speech on Friday, President Obama said:

When mistakes are made—which is inevitable in any large and complicated human enterprise—they correct those mistakes.

In Rehnquist’s case, these mistakes were “corrected” by his becoming a Supreme Court Justice in 1986. How will we hold people to account for the mistakes they are making today under our current surveillance programs?

The Edward Snowden revelations, which President Obama calls “unauthorized disclosures,” have revealed that there continues to be an utter lack of accountability and control in the intelligence apparati. We do not know exactly how they operate or what methods they use, and President Obama claims that indeed our intelligence agencies “cannot function without secrecy.” So we may never know. But it was secrecy that gave rise to the likes of J. Edgar Hoover; secrecy that he refined and controlled.

The great lesson of the Church Committee—the 1975 Senate committee that investigated intelligence agencies—was that the investigation took too long to occur. By 1975 Hoover was dead and many of his most frightening secrets no doubt died with him. We shouldn’t wait any longer. There should be a full congressional investigation into our intelligence agencies: a thirty year cheek swab, if you will, to find out who’s been modifying the DNA of these programs, and how.

We should meanwhile move quickly to place effective restrictions on the legal authorities used to justify spying on Americans and writers overseas, specifically Section 215 of the Patriot Act, 702 of FISA, and Executive Order 12333. Some of these reforms President Obama himself has suggested, and where he invites transparency such changes should be welcomed. But we need the complete picture. Surveillance in any form holds the potential for abuse and for the destruction of dissent and creative freedom. At PEN, we know that surveillance does restrict free expression even in the United States, causing writers to self-censor as shown in Chilling Effects.

The joy and challenge of reading the papers of Martin Luther King, Jr. and of delving beyond his “I Have a Dream Speech” is to discover the richness and complexity of his thought. King was concerned with racial justice as well as social justice, ending poverty, and stopping the war in Vietnam. This was the greatest threat posed by King to power brokers: the multi-pronged attack he waged on injustice. President Obama is missing the point in selectively celebrating the aspects of King that are politically expedient, yet giving kid-glove treatment to the very real surveillance structures once used to persecute the Civil Rights leader.