From Nigeria to New York: A Writer at Risk Joins Fordham University’s Faculty 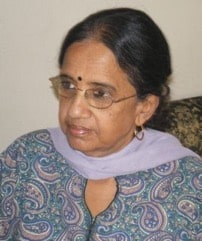 Fordham University’s newest faculty addition, Kanchana Ugbabe, is a writer and academic who was born and raised in Chennai, India—but it was Jos, Nigeria, where she spent three decades with her husband and children, and where her once peaceful life grew threatened by a climate of violence and uncertainty.

Well before conflicts began to define the region, Jos was a tranquil little town situated on a plateau 4,000 feet above sea level, surrounded by hills and lush vegetation. In this peaceful and beautiful part of the country, more than 20 indigenous ethnic groups lived together. There was a large Hausa community that had settled on the plateau and lived peaceably with other communities long before the public perception became divided along religious lines. Ugbabe and her family became part of the community in Jos situated in the ‘middle-belt’ of Nigeria, as it was called.

As a young woman, Ugbabe spent time in Scotland and Australia—where she acquired a Ph.D. from Flinders University—before settling in Jos, where she worked as a writer and professor of English. As a scholar, Ugbabe enjoyed her teaching and writing and the mentoring of young people in the university and the community. She was an active member of the Association of Nigerian Authors, which enabled her to encourage creative writing and expression wherever she found it. She also promoted the reading culture in northern Nigeria for many years through her participation in the Reading Promotion Programme of the Nigerian Book Foundation.

Jos was also the town that introduced Ugbabe to the diversity of Nigerian cultures and eased her into its multifaceted traditions and customs. Jos helped further develop Ugbabe’s passion for women’s writing and writing that evokes and reacts to the straddling of cultures.

It also informs her work: Ugbabe’s fiction delves deep into the fabric of Nigerian life, exploring the psyche and identities of women as they negotiate their way through changing situations and circumstances in life. Through the perspective of an insider and outsider, Ugbabe explores the meaning of home and belonging and the displacement that occurs through transitions in life.

Since its return to democracy, Nigeria has gone through some periods of prosperity, but the benefits have been unevenly distributed geographically and demographically. Ethnic rivalries and clashes are not uncommon in Nigeria, a country where people often feel stronger about their ethnic or regional affiliation than they do about their identity as Nigerian citizens. As religion has gradually superseded the importance of the many multiethnic layers of Nigeria’s society, major conflicts have become almost unavoidable. As a town on the fault line between the largely Muslim north and the largely Christian south, Jos found itself at the center of ethno-religious violence and crises from September 2001 onward. According to Human Rights Watch, there have been 3,800 deaths related to intercommunal, political, and sectarian violence in the central Plateau State, where Jos is located, since 2001.

As a writer and South Asian woman settled in an increasingly unstable part of Nigeria, the risks and uncertainty of living in Jos became personal for Ugbabe. Church members were attacked, a neighbor’s home was set alight, and a colleague’s daughter was killed in a bomb blast, to name just a few incidents. Kidnappings for ransom were increasing, and in 2007, a university professor was kidnapped and never found. Terrorism, hydra-headed and multifaceted, evolved in a climate of instability that suffered a breakdown of law and order. Ugbabe and her family, along with Nigerian friends, colleagues, and neighbors, found themselves at the center of a vortex of events, and in 2007, Ugbabe and her husband came to face to face with terror themselves: an attack on their home on September 18, 2015.

Amidst this chaos, an invitation from Harvard University to become Visiting Scholar with the Women and Gender Studies program enabled Ugbabe to leave Jos and continue her writing and academic work in the peaceful environment of Cambridge, Massachusetts. The period also allowed her time to distance herself from the unfortunate happenings in Jos and to gain a perspective on the risks faced by fellow writers and academics in her adopted home country, Nigeria. As that fellowship neared its end, the Artists at Risk Connection (ARC) reached out to Ugbabe with a new opportunity: a pilot visiting faculty position in the English Department at Fordham University, New York, created in partnership with Westbeth Artists Housing, ArtistsSafety.net, and Residency Unlimited, one of ARC’s featured organizations. This yearlong position would allow Ugbabe to continue writing while making headway with her research, as well as enable her to teach literature and creative writing in an enriching, safe, and encouraging community. In October, Ugbabe accepted the position.

Ugbabe’s stories have been read on the air for BBC World Service. Her collection of short stories, Soulmates, was published by Penguin in 2011. Ugbabe has also edited two collections of essays on the writings of the Nigerian novelist Chukwuemeka Ike. Her work has been published in international journals, and she has contributed three chapters to the Dictionary of Literary Biography, focusing on African writers.

ARC, PEN America, Fordham University, and Westbeth are honored and proud to have Kanchana Ugbabe join our growing community of artists.