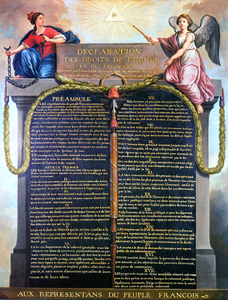 Following the horrific attacks at the Charlie Hebdo offices in Paris this January and an ensuing increase in arrests for hate speech, the state of freedom expression in France has become a highly contested topic. In the weeks after the Charlie Hebdo attacks, an estimated 50–70 people were arrested for speech deemed to be an apology for, in support of, or in defense of terrorism. The French government was criticized by many who saw this wave of arrests, occurring as French leaders were marching in support of Charlie Hebdo, as evidence of the government’s hypocrisy on matters of free expression. As France celebrates Bastille Day this week, PEN takes a look at the evolution of its free speech laws how they are utilized by authorities.

The History of Free Expression Laws in France

Soon after the French Revolution in 1789, the Declaration of the Rights of Man rooted French law in Republican ideals. Article 11 of the Declaration states: “the free communication of ideas and opinions is one of the most precious of the rights of man. Every citizen may, accordingly, speak, write, and print with freedom, but shall be responsible for such abuses of this freedom as shall be defined by law.” The exercise of this freedom, however, was limited by “formalities, conditions, restrictions, or sanctions” provided by the law.

France’s next landmark law pertaining to freedom of expression was The Freedom of the Press Law of 1881. This law outlines publishers’ responsibility to determine which material constitutes defamatory language or encourages hatred and violence on the basis of nationality, race, or religion. In 1990, the Gayssot Act imposed further legal limitations on free speech by criminalizing Holocaust denial. The Act criminalizes any contestations of “crimes against humanity,” as defined by the Nuremberg Charter, and it is applied most often to the discussion of atrocities surrounding German wartime treatment of the Jewish people. By permitting broader restrictions on speech, these earlier laws laid the foundation for the French legislature’s recent prohibition of speech deemed to be “apology for terrorism”.

The “apology for terrorism” provision was introduced as part of an anti-terror bill proposed by Minister Bernard Cazeneuve in July of 2014. The anti-terror bill was adopted into law after approval by the French National Assembly in September of 2014 and by the French Senate one month later. Individuals convicted of “apology of terrorism” can face up to 5 years in jail for in-person expression and up to 7 years imprisonment for online speech.

In comparison, blasphemy is not criminalized, and has not been since before the French Revolution.

The Current State of Freedom of Expression

France’s current legal framework governing freedom of expression illustrates the tensions inherent in a system that imposes broader restrictions on free speech. While the United States also places certain legal limitations on free speech, France’s legislation is more robust and expansive. The United States only prohibits speech that incites imminent lawless action or violence. For this reason, the Ku Klux Klan is permitted to utter racist and hateful speech towards others, but it is forbidden from directly inciting individuals to commit violent acts due to racial hatred.

Even before the Charlie attacks, French authorities enforced stringent constraints on free speech. In 2010, a group of Boycott, Divestment, and Sanctions activists were charged with practicing hate speech for placing anti-Israel stickers on vegetables in a French supermarket. Marine Le Pen, leader of the Front National party and a member of the European Parliament, faced prosecution in 2013 for comparing Muslim immigration to the Nazi occupation in World War II. That same year, French authorities also attempted to launch an investigation against American singer Bob Dylan for allegedly hateful speech during an interview with Rolling Stone when he said, “if you got a slave master or Klan in your blood, blacks can sense that. That stuff lingers to this day. Just like Jews can sense Nazi blood and the Serbs can sense Croatian blood.”

In the wake of Charlie Hebdo, however, France experienced an increased wave of arrests of and legal proceedings against individuals who had allegedly defended, threatened, or supported terrorist attacks. New sensitivity to the threat of terrorism spurred an even harsher application of “apology for terrorism” speech restrictions that were applied to a broad array of individuals—some cited arrests have included publicly intoxicated individuals, individuals with learning difficulties, and even children, all of whom had made remarks that police saw as in some way supportive of the attack on Charlie Hebdo. In many cases, these individuals were detained for singular public comments. Language falling within the French definition of “condoning terrorism” has included comments like, “they killed Charlie, I laughed,” and suggestions that the police killed in the attacked “deserved what they got.”

The most publicized of these arrests was that of Dieudonne M’Bala M’Bala, a French comedian convicted in late March for condoning terrorism by posting “I feel like Charlie Coulibaly”—a play on words combining Charlie Hebdo and Amedy Coulibaly, the man involved in several shooting attacks that occurred at the same time as the Charlie Hebdo killings—on social media. M’Bala had been convicted over 38 times for hate speech violations prior to this incident for performing anti-Semitic jokes and songs. French law is specific about the type of religious commentary that constitutes insult, defamation, or discrimination. It criminalizes any speech targeted at an actual individual or a group of individuals because of their ethnicity, national origin, or religion. However, the law protects attacks on religious ideas, practices, and even leaders. Due to the way the laws are written, M’Bala has been charged on many occasions, while Charlie Hebdo prevailed in numerous legal challenges to its satire, save for one.

France’s slew of recent arrests and convictions for hate speech does not bode well for a global commitment to free expression. After the harrowing attempt by the Charlie Hebdo attackers to silence and intimidate those who practice and exercise free speech, France would be well served to address the implications of its own vague and sometimes contradictory restrictions on free speech. Unfortunately, the French government does not appear to be interested in lifting some of these restrictions on speech. This February, French Justice Minister Christiane Taubira announced her intent to advocate for legal reform of websites hosting online content deemed hateful, racist, or anti-Semitic. This type of legislation could potentially be used to hinder the expression of diverse voices and opinions. Increasing arrests for hate speech and eroding opportunities for free expression create a climate of fear and uncertainty surrounding free speech.