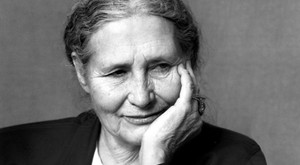 PEN American Center is greatly saddened at the news of Doris Lessing’s passing on November 17, 2013, at her home in London. Lessing was a distinguished member of English PEN and received their Golden PEN award in 2002 in honour of a lifetime’s service to literature.

From her first novel The Grass is Singing in 1950 to her breakthrough work The Golden Notebook through to her final book in 2008, Alfred and Emily, her writing was radical in both form and content. In recognition of her achievements, she was awarded the Nobel Prize for Literature in 2007, becoming only the 11th woman ever to receive the prize. According to the New York Times, when reporters in 2007 told the outspoken writer—whose irreverant work explored topics from menstruation to racial divisions—that she had won the Nobel, she said, “I couldn’t care less.”

Jo Glanville, director of English PEN, released a brief statement on the occasion of Lessing’s death: ‘Doris Lessing was a much admired member of English PEN, who generously supported our work with disadvantaged communities in the United Kingdom. Her death is a great loss for us and for literature.”