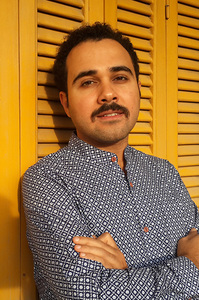 Ahmed Naji was temporarily released from prison in Egypt on December 22, 2016 after his two-year prison sentence for “violating public modesty” was suspended by an appeals court on December 18. He was charged by state prosecutors after an Egyptian citizen complained that an excerpt from Naji’s book, The Use of Life, had caused him to experience heart palpitations and a drop in blood pressure due to certain sexual content in the story. A lower court had previously acquitted Naji in December 2015, but on appeal a higher court found Naji guilty and sentenced him to the maximum prison term of two years. After 10 months in prison he was temporarily released and remained out of jail, though subject to a travel ban, while the trial was underway. On May 21, 2017, the Court of Cassation approved the challenge filed by Naji, overturning his original conviction and two-year prison sentence and ordering a retrial. However, he was unable to leave the country, with authorities arguing that he must remain in the country to await a retrial. On January 7, 2018, Naji’s retrial on charges of “violating public modesty” was referred to a criminal court, which lifted Naji’s travel restrictions and overturned the original sentence, replacing jail time with a fine. Naji was finally able to leave Egypt in July 2018.

On May 16, 2016, PEN honored Ahmed Naji with the PEN/Barbey Freedom to Write Award recognizing his struggle in the face of adversity for the right to freedom of expression. Watch the livestream of the award ceremony at PEN’s literary gala.

Ahmed Naji is an Egyptian novelist and journalist born in Mansoura in 1985. He is the author of four books, Rogers (2007), Seven Lessons Learned from Ahmed Makky (2009), The Use of Life (2014), and Rotten Evidence: Reading and Writing in Prison (2020), as well as numerous blogs and other articles. He was also a journalist for Akhbar al-Adab, a state-funded literary magazine, and frequently contributed to other newspapers and websites including Al-Modon and Al-Masry Al-Youm. Naji has been a vocal critic of official corruption under the rule of Egyptian President Abdel Fattah al-Sisi.

Egypt’s literary and political communities have expressed widespread support for Naji. Seven members of the committee that wrote the Egyptian Constitution published a statement in February 2016 condemning Naji’s sentencing as unconstitutional, arguing that the conviction contravenes Article 67 of the Constitution. Over 500 Egyptian writers and artists also signed a statement in February 2016 in solidarity with Naji, criticizing the government’s “multi-armed attack on a number of writers and journalists because of their opinions” and the “terrible and terrifying path taken by the regime.”

May 2018: A Cairo criminal court lifts Naji’s travel restrictions and overturns the original sentence after a retrial, replacing jail time with a fine of LE 20K ($1,130).

January 2018: Naji’s retrial on charges of “violating public modesty” is referred to a criminal court.

May 2017: A Cairo appeals court overturned the February 2016 decision under which Naji was convicted and sentenced to two years in prison for “violating public modesty,” but also ordered the case to re-tried. This is the second time the case has been appealed.

December 2016: After serving 10 months in prison, Ahmed Naji’s prison sentence is suspended, and he is temporarily released from prison, but remains under a travel ban. The Egyptian Constitution, drafted in 2014, explicitly guarantees freedom of artistic and literary creation, freedom of thought and opinion, and freedom of the press. Article 67 forbids the jailing of artists and writers for publishing their work. However, Article 178 of the Penal Code, under which Naji was sentenced, criminalizes content that violates public morals.

May 2016: An International day of Reading for Ahmed Naji is started. The readings of Naji’s work are performed in order to put more international pressure on Egypt to release him.

March 2016: PEN America announces it will confer the PEN/Barbey Freedom to Write Award upon imprisoned Egyptian novelist and journalist Ahmed Naji at its annual Literary Gala on May 16 at the American Museum of Natural History in New York. The Edwin Barbey Charitable Fund, directed by Peter Barbey and his wife, Pamela, will underwrite the new award.

February 2016: An Egyptian higher court delivers a guilty verdict and imposes the maximum sentence of two years in prison for Ahmed Naji. The editor-in-chief of Akhbar al-Adab, Tarek al-Taher, is also fined approximately $1,250 for publishing the excerpt. The prosecutors argue that Naji’s use of “vulgar” phrases and sexually explicit scenes constitutes a “disease” destroying Egyptian social values. Naji and his lawyer rebuff the accusations and argue the language used in his novel are widely used in quotidian Egyptian vernacular and in classical Arabic literature. Naji claims the prosecution was treating his fictional novel as an actual representation of his life. The prosecution threatens to add charges against Naji for “dealing with hashish,” because the novel’s excerpt described drug usage.

Naji’s lawyers submit a motion to the Prosecutor-General arguing the sentence against Naji could violates the Egyptian Constitution. His legal team appeals the verdict, and asks that the case be retried altogether.

January 2016: In a verdict given by the lower court, Naji and al-Taher are both acquitted on charges of violating public decency. Prosecutors file an appeal shortly thereafter challenging Naji’s and al-Taher’s acquittal arguing his text indeed “harmed public morals.” The retrial is set to take place on February 6.

December 2015: The trial begins. The prosecution, in their opening arguments, maintained the defendant (Naji) violated public decency and stated Naji “went too far with his intellectual abnormality.” The defense brought forth prominent novelists as witnesses. Novelists Gaber Asfour, Sonallah Ibrahim, and Mohamed Salamawi explained literary texts cannot be only subjected to literal translations and must be interpreted within the novel’s context.The prosecution is seeking the maximum penalty. If convicted Naji faces up to two years in prison and a fine up to 10,000 Egyptians pounds ($1,245). The trial adjourned until January 2, 2015.

November 2015: A trial is opened against Naji and al-Taher. During the court session the Prosecutor’s brings forth charges against Naji’s novel claiming it “references transient lust and fleeting pleasure,” is a “malicious violation of the sanctity of morals,” and is a “departure from emotional modesty.” Mohammad Othman, the defense lawyer, requested an adjournment to access the case file and the referral to prosecution. The case is postponed to December 12, 2015.

April 2015: Hani Saleh Tawfik, a 65-year-old Egyptian man, files a case against Naji, alleging that reading the excerpt had caused him to experience heart palpitations, sickness, and a drop in blood pressure. Naji and al-Taher are subjected to an investigation by Egyptian authorities.

August 2014: The editor of Akhbar al-Adab, Tarek al-Taher, publishes an excerpt from Ahmed Naji’s third book, The Use of Life, which had been previously approved by Egypt’s censorship authority. In the excerpt, the narrator smokes hashish, drinks alcohol with his friends, and enjoys a sexual relationship with a woman.

The crackdown on artists and writers in Egypt has intensified since President Sisi took power in 2014, including new restrictions on the press, arrests of writers, journalists, and activists, shut downs of theaters and art galleries, and violent suppression of peaceful dissent and public demonstrations. According to the Committee to Protect Journalists, as of December 1, 2016, Egypt ranks third in the world in its number of jailed journalists, behind Turkey and China.

“As a writer or journalist in Egypt, you’re constantly under threat. There is a security guard outside my office, because all the newspapers in Egypt are potential terrorist targets. Two months ago, a bomb went off right next to my office. I know I can also face harassment from police. But I never imagined that I would be threatened because of my novels.”  – From RNW interview

“Reading and Writing in an Egyptian Prison”

“An Egyptian at the American Protest”

The Use of Life, excerpt

“A Sad Story of Freedom of Expression: How Do You Sing in Egypt?”

“Between a Rock and a Hard Place: The Fate of Revolutionary Art in Egypt”

“Culture in the Age of Sisi: The Continued Propaganda of Illusions”

“Farewell to the Youth”

“How to Become an Independent Musician?”

“Sisi, Do Not Put Our Backs Against the Wall”

“Art and Liberty in Egypt, Today and Yesterday”

Egypt’s Harassment of writers chills freedom of speech and movement

RELEASE OF AHMED NAJI A VICTORY FOR LITERARY EXPRESSION IN EGYPT

Egypt: Sentencing of Novelist a Direct Attack on Writers

Chinese writer & scholar #XuZhiyong has been detained for more than a year by the #CCP for writing the truth about Xi Jinping’s mishandling of the COVID-19 outbreak. His fiancé #LiQiaochu has been detained as well. They should be freed immediately. #ExpressionNOTOppression

Join @iamdanyeli & talented DREAMing Out Loud writers as they tell their stories, on May 22, part of @PENworldvoices. Sign up below to join them.