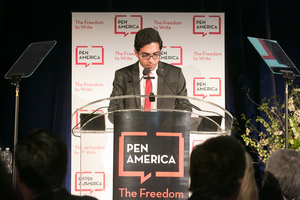 Ahmed Naji is the author of three books, a journalist at literary magazine Akhbar al-Adab, and a frequent contributor to other newspapers and websites in which he has criticized official corruption under Egyptian President Abdel Fattah el-Sisi. In February 2016, an Egytian court found him guilty of “violating public modesty” for sexual content in his novel The Use of Life and imposed the maximum sentence of two years in prison. Naji’s case is emblematic of Egypt’s escalating crackdown on free expression that has in the past months expanded beyond press freedom and public demonstrations to also target artistic and cultural spaces, including the arrests of writers and raids of a number of art galleries, theaters, and publishing houses. Naji was honored with this year’s PEN/Barbey Freedom to Write Award, presented at the 2016 PEN Literary Gala. His brother, Mohamed, accepted the award on his behalf.

Ahmed sends you all his greetings and wishes he could be here tonight. Right now, he is in solitary confinement. This is something I am living with now; this is the meaning of imprisonment. He is not allowed to write a message to be read at this important event, because letting out messages written by a prisoner is a dangerous thing! Any written messages from prison in Egypt require a permit, and would be subject to the monitoring of the prison’s administration. I think this is to reinforce the prisoner’s sense of being isolated, which is a main aspect of Ahmed’s punishment.

Since the beginning of this predicament which our entire family has had to endure, and which has also caused my older brother’s friends to suffer very much, I have come to see that part of his imprisonment sentence is to try to deny him any form of freedom, any form of joy. This is why he is banned from writing, something he has done his entire life. Growing up together, I always caught sight of him musing, absorbed in his magical world, to tell us his mythical tales. Ahmed’s imagination is his perpetual game. He is not present at this event because of what his imagination depicted, unfortunately. Writing for Ahmed is both a professional matter, and a life choice, and right now he is paying the price of his linguistic choices, despite the constitutional and legal texts in Egypt which should protect him from imprisonment. He is fighting against a status quo that does not care much about literature and the freedom of literary writers.

At each visit, Ahmed keeps telling us about the new novel he is writing. He is not writing it the way he normally writes literature, using his computer, connected to the internet, and while listening to music, all of which are unavailable in prison, of course. So he is thinking about writing a novel which he cannot actually write. He is imagining it, like he always has. Although Ahmed has been stripped of all his fundamental rights due to laws that disregard the freedom of expression, which is protected in Egypt’s Constitution and also in the International Covenant on Human Rights that Egypt has signed, they cannot take away his right to imagination.

My brother is not the only Arab who is going through this, but he is the first Egyptian to be condemned and sentenced to two years in prison because of his writings. Ahmed and our family hope that awarding him this prize will highlight the crackdown on the freedom of expression in the Arab world. He was not punished for some sort of political activism, but for writing a novel in which the characters do what normal people all over the world do. For this the court decided to sentence him to a harsh experience behind bars. A young Egyptian author was forced under these conditions to fight a personal fight. He stepped into this crisis to seize a free space for expression. His case could be a chance for us to amend the oppressive laws in Egypt.

Since the beginning of these absurd events, I have been reflecting on Ahmed’s view of the world. I see it in the books and the copies of Henri Matisse paintings which he specifically asked for. I can’t respond to his requests, because the prison’s administration does not allow prisoners to have illustrations, comics, paintings, and their likes. But this incident has shown me how strong Ahmed is, and how strong his imagination is. Although he is in prison for violating the sanctity of public morals, this did not stop him from requesting a copy of Matisse’s “The Dance.” I wonder whether this was another way to challenge their authority. In the end, I would like to express my gratitude, and most certainly Ahmed’s gratitude, to PEN for all its support.