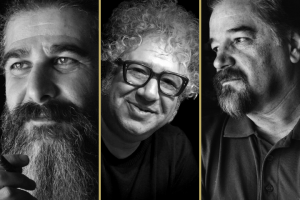 Baktash Abtin, Kevyan Bajan, and Reza Khandan Mahabadi are three celebrated writers who have been imprisoned by the Iranian authorities for their writing, their defense of free expression, and their peaceful opposition to state censorship. In May 2019, they were each sentenced to six years in prison on spurious national security and propaganda charges connected to their activities with the Iranian Writers Association (IWA), a writers’ group in which poet and filmmaker Abtin, novelist and journalist Bajan, and fiction writer and literary critic Khandan Mahabadi have played leading roles. Iranian authorities have cited the following activities as evidence against the three writers: attending the memorials of well-known Iranian poets and writers, circulating IWA member newsletters, and compiling a book chronicling the 50-year history of the IWA. All three writers were summoned to begin their collective 15-year sentence at Evin Prison in September 2020, even as the COVID-19 pandemic was ravaging Iranian prisons. Like many detained at Evin, Abtin and Khandan Mahabadi have both contracted the virus since their imprisonment, and all three writers suffer from medical neglect.

PEN America Chief Executive Officer Suzanne Nossel said, “Baktash Abtin, Keyvan Bajan, and Reza Khandan Mahabadi are embodiments of the spirit that animates our work at PEN America. They are writers who are called not only to offer prose and ideas on a page, but to live fearlessly—and sacrifice immensely in service of the liberties that underpin free thought, art, culture, and creativity. By taking up the mantle of leadership within Iran’s literary community, they have served as beacons for countless authors and thinkers whose ability to imagine, push boundaries, and challenge repression under the most dangerous conditions is fed by the knowledge that they do not stand alone. The Iranian government’s targeting of these three lions of Iran’s writing community, men whose only weapon is their intellect, marks the moral bankruptcy of a regime that is so afraid for its own survival that it has resorted to a futile effort to stamp out independent thought.”

The PEN/Barbey Freedom to Write Award kicks off a global advocacy campaign calling for the honorees’ freedom. Past honorees include Chinese essayist Xu Zhiyong (2020); Saudi writer-activists Nouf Abdulaziz, Loujain Al-Hathloul, and Eman Al-Nafjan (2019, all conditionally freed as of 2021); and Reuters reporters Wa Lone and Kyaw Soe Oo (2018, freed in 2019).

Iran is among the world’s most restrictive countries for freedom of expression. While the human rights situation in Iran has been dire for decades, the state of freedom of expression and respect for fundamental rights in the country has deteriorated even further in recent years. Iran holds the fourth highest number of writers and intellectuals in prison globally, according to PEN America’s 2020 Freedom to Write Index. Dozens of journalists—alongside scores of other writers, bloggers, artists, human rights defenders, and others—are currently imprisoned on politically-motivated charges in Iran, subject to a judicial system notorious for its lack of transparency, high rates of capital punishment, medical neglect, and physical abuse. Despite promises of expanded freedoms, Hassan Rouhani’s presidency was marked by intensified repression and arbitrary political restrictions—preventing Iranians from having a voice in how they are governed. And in August 2021, Ebrahim Raisi became the country’s new president, after a June election in which all opposition had been disqualified. Raisi is notorious for his past role in human rights abuses, having been accused of involvement in mass killings of political prisoners in the 1980s. The Iranian government has also been engaged in the targeting and transnational kidnapping of dissidents, writers, and journalists outside the country, and the harassment of those individuals’ family members inside the country.

Lynn Nottage’s Reading of a Letter from Baktash Abtin, Keyvan Bajan, and Reza Khandan Mahabadi, and Conferral of the Award by Suzanne Nossel

SUZANNE NOSSEL: Our work at PEN America encompasses both the enablers and impediments to free expression worldwide. We amplify the voices of the incarcerated, the undocumented, the ignored. We combat harassment, disinformation, and degradation of public discourse. But the heart and soul of our work at PEN is on behalf of imperiled writers. At a time when writers here don’t necessarily agree on much, the cause of an unjustly imprisoned comrade in keyboard reminds us that those compelled by the written word share values that transcend politics and ideology. As we celebrate tonight, we’re ever mindful of who is missing, emblemized by an empty chair belonging to those who are not free to sit with us or stand with us or speak out with us.

PEN’s work on behalf of jailed writers is not new. Soon, we’ll hear from the legendary Wole Soyinka, who spent 22 months in a Nigerian prison more than 50 years ago, denied books, pens, and paper. But even when he didn’t have a pen, Wole had PEN. PEN’s then-President, playwright Arthur Miller, wrote a letter to Soyinka’s captors, helping to secure his freedom. That simple method is elemental to PEN: a principle of writer-to-writer solidarity and a call to those who enjoy freedom, clout, and agency to rise up for those who are deprived of the same.

But in an age of encroaching authoritarianism, writers and thinkers confront a protean and intensifying menace. Writers historically faced the predicament of whether to risk their lives and freedom as political dissenters, or instead, to trade potency for self-preservation in exile. That once-wrenching choice is now increasingly not a choice at all. Rulers in China, Russia, Iran, Saudi Arabia, Turkey, Bangladesh, and more are stretching a long arm beyond their borders, plotting against and poisoning those who have fled as far away as Britain and even Brooklyn. They terrorize high-profile exiles to send a message to critics everywhere that they cannot run and cannot hide.

Governments, including our own, that used to be willing to stigmatize egregious rights abusers are now increasingly intertwined with them. We live on a smaller, hotter, more connected planet, making moral shaming a luxury that even democracies seem to feel they can no longer afford. Not coincidentally, the space forged by writers for discourse and debate is vanishing. In August, PEN Belarus was officially shuttered by the Minsk government. After six thriving years helping foster a fledgling democracy, PEN Myanmar is beneath the boot of a military junta, and we have here tonight one of the founders of PEN Myanmar, who as she put it, is just taking a little break from being inside her country. Her name is Ma Thida, and we’re delighted that she’s with us and we hope she can get home.

Rising authoritarianism makes its weight felt on the shoulders of those who are still free. When exiled writers are hunted down, we must keep them a step ahead of their would-be captors. When once-outspoken governments go silent, we must raise the volume. When colleague organizations are banned, we must make banishment a badge of honor.

Each year at the Gala, we confer the PEN/Barbey Freedom to Write Award on writers whose courage prompts us to renew our collective vow to defend free societies. Tonight, I’m honored to introduce Iranian writers Baktash Abtin, Reza Khandan Mahabadi, and Kevyan Bajan. This is their story.

We greet you from Evin Prison’s Ward 8 in Tehran and express our gratitude for your attention to us. More than anything, we’re delighted that the importance of freedom of expression is being recognized. Despite the modern world’s astonishing technological and industrial advances, humanity is facing a crisis. This includes the freedom of expression without exception that is needed more than ever.

In many parts of the world, authoritarianism—that is best manifested in censorship and oppression, publicly or hidden—is ruling and spreading fast. This doubles the responsibility of writers because human beings and creativity flourish in absolute freedom. Isn’t that the writer’s dream?

We have been imprisoned for fulfilling this responsibility, and we have no regrets. We are also well aware that there are many famous, unknown, free, or jailed individuals who are fighting to put an end to censorship in Iran and around the world. Your award in fact belongs to all of them. It also belongs to the members of the Iranian Writers’ Association, who have been standing up against censorship, and for more than half a century, have been advocating for freedom of expression without exception under unimaginable circumstances.

Once again, we salute you and express gratitude.

Surprise bestsellers may be in short supply this December as the ongoing COVID-19 pandemic has been exacerbating existing problems in the global supply chain. https://www.vox.com/culture/22687960/book-shortage-paper-ink-printing-labor-explained

TOMORROW: Don't miss our FREE #PENOutLoud conversation with Wole Soyinka about his first novel in nearly 50 years! Wole will be joined by Farah Jasmine Griffin (@FJasmineG) to discuss the book’s interrogation of political & social corruption: https://bit.ly/2YPzZvj.

One year ago, Vietnamese authorities detained author Pham Doan Trang for her democratic writings, after a years-long campaign of harassment. Last month, she was formally indicted for “making anti-state propaganda” and faces 20 years in prison for her work. #FreePhamDoanTrang