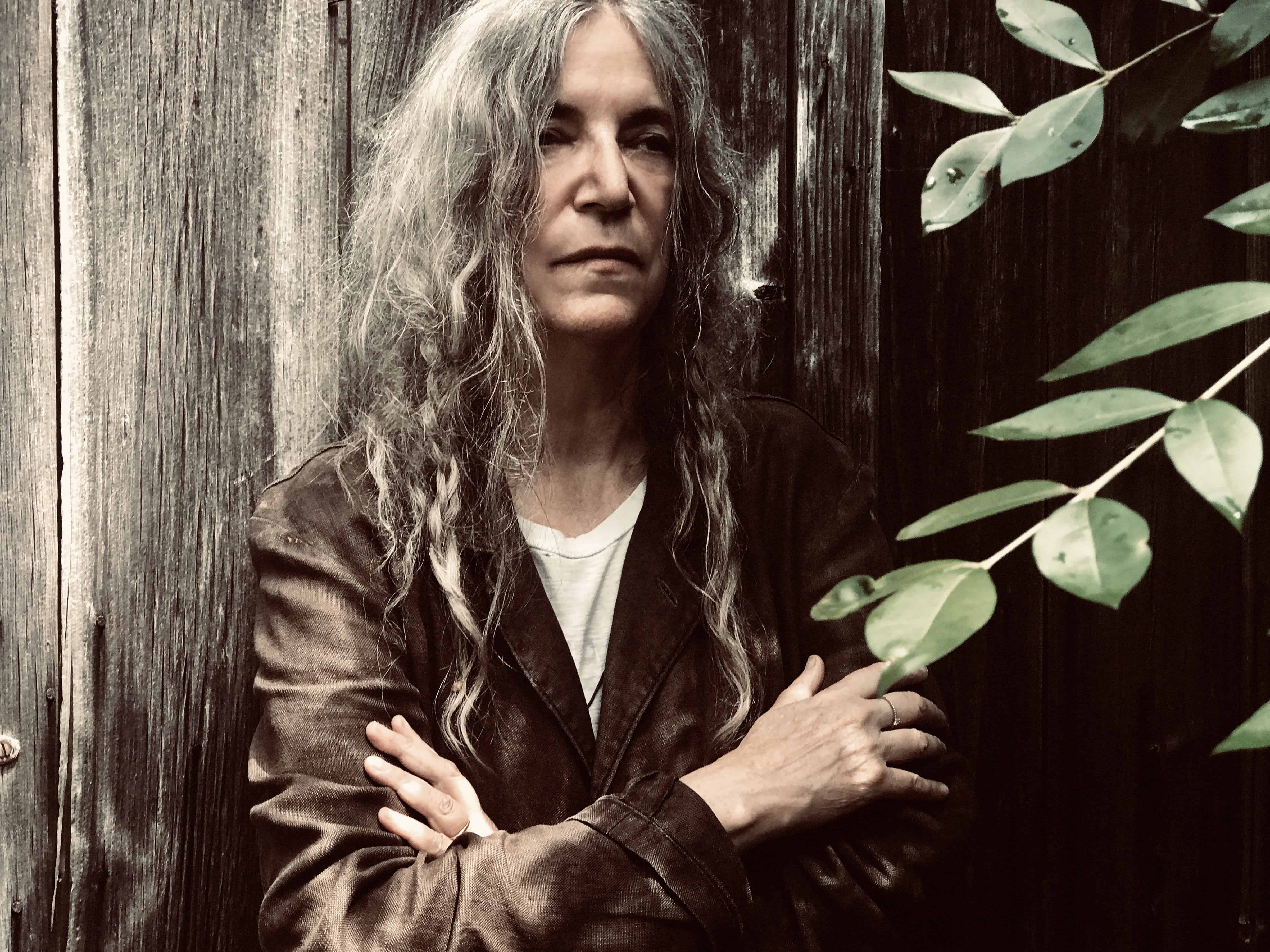 Patti Smith is a writer, performer, and visual artist. She gained recognition in the 1970s for her revolutionary merging of poetry and rock. She has release twelve albums, including Horses, which has been hailed as one of the top one hundred albums of all time by Rolling Stone.

Smith had her first exhibit of drawings at the Gotham Book Mart in 1973 and was represented by the Robert Miller Gallery for three decades. Her retrospective exhibitions include the Andy Warhol Museum, the Fondation Cartier, and the Wadsworth Atheneum Museum of Art. Her books include Just Kids (winner of the National Book Award in 2010), Witt, Babel, Woolgathering, The Coral Sea, Auguries of Innocence, M Train, Devotion, and Year of the Monkey.

In 2005, the French Ministry of Culture awarded Smith the title of Commandeur des Arts et des Lettres, the highest honor given to an artist by the French Republic. She was inducted into the Rock and Roll Hall of Fame in 2007.

Smith married musician Fred Sonic Smith in Detroit in 1980. They have a son, Jackson, and a daughter, Jesse. Smith resides in New York City.

Patti Smith’s Acceptance REmarks, Conferral of the Award by Bono and Joan Baez, and Smith’s Performance of her Song “Peaceable Kingdom”

FRANKLIN LEONARD: There are certain artists who have forever altered our culture, bring forms and influences together in ways that challenge and change everything that follows them. Patti Smith is one such artist. A poet and a memoirist, a songwriter and an activist, a photographer and a performer, and so much more. Beyond what her own work has brought to us all, Patti Smith is a champion for making literature, libraries, and creative freedom accessible to everyone. Look, Patti Smith is a legend, unparalleled, period. Full stop. And tonight, we honor her with the PEN/Audible Literary Service Award, presented each year to a cultural luminary whose work helps us understand the human condition in powerful and original ways. Joining us now with a tribute to Patti is a performer, activist, member of a little-known band from Dublin, Ireland called U2, and philanthropist, Bono.

BONO: You had your spirit guides for vision and text and context—Arthur Rimbaud, your mate Robert Mapplethorpe. I’m thinking of Just Kids—I understand that what matters is the work, the string of words propelled by God becoming a poem. The weave of color and graphite scrolled on the sheet that magnifies His motion. To achieve within the work a perfect balance of faith and execution, from this state of mind, comes a light, a life-changer. Wow. Words of wonder. What other hand could hold this PEN award more sure, surer than yours? Again and again, you give yourself to the work at hand, the pen at hand, and the miracle that it is suddenly not work at all. Faith and action, faith and execution, faith in execution. Thank you so much, Patti Smith. Thank you for inspiring us all.

JOAN BAEZ: Patti Smith, my sister in arms, open arms. I begin by telling you that towards the end of my concert career, I started wearing an oversized black jacket, white T-shirt, black vest, blue jeans, and my favorite boots. I called it “my Patti Smith outfit,” and it made my life a whole lot easier. And behind me is a painting I did of you out of love and admiration, and it will hang in the next exhibit, which is called “Mischief Makers.” So, Patti Lee: word-crafter, spellweaver, butterfly-catcher, potato-peeler, and a kid in your own right. Presenting you with this award is as much my honor as it is yours. Please accept the PEN America Audible Literary Service Award. Much love to you and congratulations.

PATTI SMITH: Thank you, PEN America. Thank you to the Gala co-chairs, to the Board of Trustees, and to the entire staff of PEN. Thank you so much for your hard work, and to PEN itself, for all the work that you do globally, on our behalf. Thank you to Audible for generously sponsoring this award, and thank you to my dear friends, Bono and Joan Baez. And to Joan, thank you for all the inspiration—a lifetime of inspiration—for all of us. You were a beacon when I was a teenager. You still are. So thank you everyone—Joan, Bono, PEN, Audible, everyone—thank you so much. People have the power.

The inauguration of U.S. President Joe Biden in Washington was watched and followed in countries around the world. But not in Turkmenistan. https://bit.ly/3sLAn8U

Thank you to everyone who has joined us for You Are A Writer - a series of free workshops on the business of books. Don't miss our very last workshop next Wednesday on the ins and outs of literary representation: https://bit.ly/3632vdL.

Michael Pack resigned Wednesday as the CEO of the federal agency over the Voice of America and other federally funded international broadcasters after a turbulent seven-month tenure. https://n.pr/39279e2