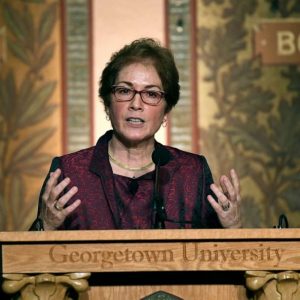 Ambassador Marie L. Yovanovitch (ret.) is a senior fellow at the Carnegie Endowment for International Peace. She is also a non-resident fellow at the Institute for the Study of Diplomacy at Georgetown University. Previously, she served as U.S. ambassador to Ukraine (2016–2019), to the Republic of Armenia (2008–2011), and to the Kyrgyz Republic (2005–2008). She also served as dean of the School of Language Studies at the Foreign Service Institute, U.S. Department of State and as the deputy commandant and international advisor at the Dwight D. Eisenhower School for National Security and Resource Strategy, National Defense University. Earlier, she served as the principal deputy assistant secretary for the State Department’s Bureau of European and Eurasian Affairs, where she coordinated policy on European and global security issues. In prior positions, she served overseas at U.S. embassies in Moscow, London, Ottawa, and Mogadishu.

A career member of the Senior Foreign Service, Yovanovitch earned the Senior Foreign Service Performance Award eight times and the State Department’s Superior Honor Award on nine occasions. She is also the recipient of two Presidential Distinguished Service Awards and the Secretary’s Diplomacy in Human Rights Award. In 2020, she received the Richard G. Lugar Award from Indiana University, and the Trainor Award for Excellence in the Conduct of Diplomacy from Georgetown University.

Yovanovitch is a graduate of Princeton University, where she earned a BA in history and Russian studies. She studied at the Pushkin Institute and received an MS from the National Defense University. She is currently writing a memoir, Lessons from the Edge, which will be published in the spring.

MADELEINE ALBRIGHT: I’m delighted to participate in PEN America’s virtual gala, and I’m thrilled to be able to honor a public servant of uncommon character and courage. In 2017, I traveled to Ukraine to meet with young political leaders and anti-corruption activists who were working to strengthen the country’s democracy. They told me they had no better friend than the United States and no better ally than America’s ambassador in Kiev, Marie Yovanovitch. Ambassador Yovanovitch understood the struggles of Ukraine because her own life had been shaped by many of the same forces. Her parents had fled communism and fascism in Europe, surviving poverty, war, and displacement before finding a new home in North America.

Ambassador Yovanovitch served the State Department with incredible distinction for nearly 34 years, representing administrations of both parties with the utmost professionalism and skill. And then, history came calling. As America’s ambassador in Ukraine, she put anti-corruption at the center of her agenda and drew the ire of those whose livelihoods depended on such graft. She became the target of vicious conspiracy theories. These ridiculous lies found a welcome audience in the White House that disregarded the truth and engaged in the kind of illicit dealings that Ambassador Yovanovitch had spent her career opposing.

When the Trump administration’s schemes in Ukraine were exposed, she was called upon to tell her story before Congress and the American public. She went up against the most powerful people in the world, including the United States president and Secretary of State. She was armed only with the truth and sparkling an American flag pin. In doing so, she put loyalty to the country ahead of loyalty to the president. She demonstrated a deep devotion to the Constitution and the principles that PEN America exists to defend. For that reason, there is no one better suited to receive this year’s PEN/Benenson Courage Award than Ambassador Marie Yovanovitch.

MARIE YOVANOVITCH: Thank you, Secretary Albright. And I’d like to thank you for the important example you set, as the first woman to lead the Department of State. You told your many female employees—of which I was one—that we should reach for the stars. The power of your example—and not incidentally, the example of your power—has inspired not just us, but many little girls across America, and all across the globe.

I also want to thank PEN America. Throughout my career, I’ve seen this great organization stand up for freedom of expression. It’s important work, inspiring work, and helps ensure that each one of us lives in a better world that is more free and more just. So it is humbling to be honored with the PEN/Benenson Courage Award, and even more humbling that my co-awardee is Darnella Frazier. Darnella had the courage to broadcast the trust of George Floyd’s murder for all to see, and she has galvanized America. It is Darnella, and so many like her, that give me hope for the future, because courage—that kind of courage—is contagious. It turns out that one person can change the world. Maybe not the whole world, maybe not all at once, but for sure one person can transform their piece of the world.

In America, we see that courage every single day. In the doctors and nurses who battle a plague we cannot see and do not understand, in the election workers who are safeguarding our democracy, in the community organizers who provide the safety net for the most vulnerable among us. In the essential workers, who keep all of us going but don’t receive a paycheck that covers their essentials. In the millions of Americans who have stood up for racial and social justice, and in the reporters who bring us the facts about all of it.

To this hall of heroes, let me add the anonymous government workers who provide all of us services every day, even today. I’d like to highlight the courage of the women and men of the Department of State. These unsung diplomats often risk their lives to keep American citizens safe, American business booming, and America secure. It’s easy to forget these many acts of courage in head-spinning times, when every day, another norm is busted. But these individuals, the ones who serve our country and their fellow citizens, are the solid core of America. They are the ones who animate America, her values, and her institutions. Without them, the Constitution is just a piece of paper, and our institutions are just beautiful, marble buildings. With them, the idea of America persists and prevails. The history of our times has not yet been written, and I am full of hope about what our story will be, because I see so many people standing up and doing the right thing. You know some of them because their actions have put them in headlines. Most of them toil under the radar, keeping Americans safer, more prosperous, and more free. Their actions advance and protect our interests. In return, we need to honor their service and sacrifice.

Russian police on Thursday detained Lyubov Sobol, an ally of jailed Kremlin critic Alexei Navalny, her lawyer said, after she urged Navalny’s supporters to take to the streets on Saturday to call for his release. https://reut.rs/3sLAHVa

The inauguration of U.S. President Joe Biden in Washington was watched and followed in countries around the world. But not in Turkmenistan. https://bit.ly/3sLAn8U

Thank you to everyone who has joined us for You Are A Writer - a series of free workshops on the business of books. Don't miss our very last workshop next Wednesday on the ins and outs of literary representation: https://bit.ly/3632vdL.