Where Impunity Reigns: An Interview with Oluwafiropo Ewenla of Nigerian PEN 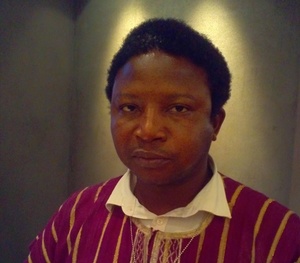 November 23 is the International Day to End Impunity, which is dedicated to demanding justice for those who have been targeted for exercising their right to freedom of expression. In October 2013, PEN traveled to the UN Human Rights Council to press for free expression in China, Mexico, and Nigeria. Nigeria is experiencing a technology boom in its second decade of democracy, yet the second largest economy in Africa faces enormous challenges. The Northern region has been affected by Boko Haram, a militant Islamist group that has waged a violent campaign against civilians from all religions, and the Delta region in the south continues to be plagued by the despoliation of its natural resources by multinational oil companies and the practice of kidnapping by armed groups. In Geneva, we were joined by PEN Nigeria secretary-general Oluwafiropo Ewenla to highlight PEN’s concerns about censorship and threats to journalists. Oluwafiropo, who goes by the nickname Ropo, is a writer, filmmaker, journalist, and human rights activist based at the University of Ibadan.

PEN America: Can you speak to us about impunity in Nigeria?

Oluwafiropo Ewenla (OE):Nigeria has come to define itself by that very word, especially when it comes to law and order and respect for the very essence of fundamental human rights, particularly as it concerns writers and people in the creative industry. Impunity is that attitude that makes it possible for violators of rights to get away with crimes over the years. So what you have in Nigeria is a situation in which there are generations of crimes—pillages—against the Nigerian people that have either been investigated and not prosecuted or have been given very shoddy judicial treatment. When you talk of even the question of plea-bargaining in the courts, the way it’s being handled by the Nigerian government when it comes to the judicial system is enough to infuriate those who are keen observers of the system in Nigeria.

We have unresolved cases of the gruesome murder of journalists.  Take the case of Dele Giwa, who received a letter bomb at his house years ago [in 1986]—everybody seemed to know who committed the offence, but those who hold the reins of power have not been bold enough to say that they are going to prosecute. So, when you have that kind of climate where people believe that if you get away with an offense, if you perpetrate a violation and people know that you’re the perpetrator, and you still act as if you are above the law, it means you can get away with it again and again. It also means invariably that those who write have a constant fear at the back of their minds—if it happened to Dele Giwa and nobody brought the killers to justice, it could also happen to me.

PEN: What is an important issue for free expression in Nigeria right now?

OE: The right of creative people to validly express their ideas publicly. The government sent a very potent message in the last few months when the video documentary Fuelling Poverty [sic] was released.  Fuelling Poverty tried to document the “Occupy Nigeria” protest, which came on the heels of the arbitrary increase in the price of PMS (petroleum fuel). And what happened was the government banned it. So when I hear the representative of the Nigerian government saying today on the floor of the United Nations that the Nigerian press is the freest in the world, I ask, “How does that translate when the government just places something like a fatwa on a process of freedom of expression, one that is still very fresh in our memory?”

PEN: Do you have any other reactions to Nigeria’s statement at the Universal Periodic Review today?

OE: I think there’s no degree of seriousness or commitment on the part of Nigeria. I think much of the reactions—most of the positions of the Nigerian government—are not well researched; they’re not balanced. They come from a protected, cocooned environment, which justifiably most governments in the world are likely to fall prey to. But I think it’s important for the Nigerian government to take second opinions, even third opinions, from people who they might not consider as friendly so that they can strengthen their position. I think part of what weakens the Nigerian position on the floor of the United Nations UPR session today is what Nigerians would call a padi padi environment: an environment where you rub my back, and I grease your palm. The Nigerian government doesn’t expect Ghana to come out and say, “You cannot do this” because it is expected that Nigeria will also back Ghana when Ghana comes up for review. An important goal for people like us at the level of PEN International, or PEN Nigeria, or Amnesty International, or all the other coalitions of human rights bodies present at these sessions is to guarantee that the representatives making these presentations for their governments look us in the face and tell these lies and let us put it all on record.

PEN: What about the government’s position on Boko Haram?

If you come to the United Nations floor and pretend as if the Boko Haram crisis is purely religious, then you’re lying, because this is about people in government chasing the means of control and power—economic and political—and they are using religion as a smokescreen. If people are talking of deprivation, everybody is deprived the same way. My people would say, “Hunger affects us in equal ways, but we react differently to reprimands.” The supposed Boko Haram character is government-created, or created by friends of people in the government. So when they come to the United Nations and claim that they don’t know anything about the nature of Boko Haram, or why or how it was created, they’re telling open lies. We’re not asking the government about things happening far away in Somalia; we’re asking about things happening right under their noses. If the government is really at that level of ignorance, it should resign because it means they’re not in control.