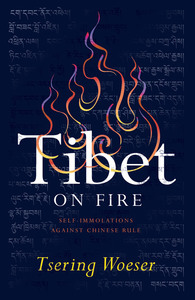 The following is an excerpt from the forthcoming book Tibet on Fire (Verso Books, January 2016), Tsering Woeser’s account of the oppression Tibetans face and the ideals driving those who resist. A prominent voice of the Tibetan movement, Woeser is one of the few Tibetan authors to write in Chinese. Her acts of resistance have led to her house arrest, where she remains under close surveillance to this day.

“These acts of self-immolation seem useless, don’t they?” Holding back tears, I told him, “Even if these acts of protest are useless, people still need dignity. And that is what self-immolators are seeking: dignity for our people.”

Perhaps this journalist, in his casual conclusion that self-immolation was “useless,” was unaware of the self-immolation of Thich Quang Duc in defense of Buddhism and the rights of his people in Saigon in 1963, or of the many monks and nuns inspired by this act who chose to follow in his footsteps. Similarly, the Chinese people are probably also unaware of the self-immolation of a monk outside the Fa’men Temple near Xi’an at the beginning of the Cultural Revolution, in an attempt to protect this holy site from the rampaging Red Guards. Considering the ignorance that surrounds self-immolation as a form of political protest, how can we expect the international community to comprehend the 146 cases of self-immolation that have occurred in recent years? And how can we expect them to understand that these are not only attempts to protect our religion but also to fight for our freedom?

Among the many misunderstandings, though, there is one common misperception that I find particularly discon­certing. Quite a few journalists over the past few years have asked me: “Why doesn’t the Dalai Lama call upon the Tibetan people to stop these self-immolations?” In fact, the Dalai Lama has repeatedly called upon the Chinese govern­ment and the local authorities to face this stark reality and “thoroughly investigate” why the young people of Tibet are self-immolating. But what do people expect the Dalai Lama to say? Do they want His Holiness to openly denounce self-immolators? Do they not recognize the deep pain appar­ent in all of his comments on self-immolation?

On January 4, 2012, at a prayer meeting in Kalachakra, India, the leader of the Tibetan government in exile read aloud the names of Tibetans who had self-immolated. The Dalai Lama’s demeanor changed noticeably in the course of this reading. His eyes closed tightly as if he was unable to bear the pain, and they eventually welled with tears. A Japanese visitor recounted this moving scene on his blog: “I have spent 25 years in Dharmasala, and have seen his Holiness many times over these years. But never have I seen him so gloomy and with such heavy grief in his heart.”

Well-intentioned yet deeply damaging misunderstand­ings of the aims of self-immolators are all too common. Claiming sympathy with the Tibetan cause, one writer has confidently declared that self-immolation as a means to deter the CCP is useless. “These acts of self-immolation will leave international organizations and international support­ers with the irresolvable dilemma of supporting the cause but disagreeing with its means, leading them to take a step back from their advocacy on the Tibetan issue,” he wrote. “In the twenty-first century, no one will endorse the use of such extreme measures.” Instead, he encouraged the Tibetan people to “cherish their lives” and, finally, to “stop worrying.” Could there be any more intellectually dishon­est advice than this?

Are the Tibetan people simply too stupid and impulsive and unable to value their lives? Or do they see self-immolation as some kind of game? Finally, I must ask, are the Tibetan people required to check in with all of their self-declared “friends” before engaging in any type of protest, for fear that some might disapprove? What we must understand is that self-immolation is a form of protest. And insofar as it is a form of protest, so long as their root causes are not resolved, the protests will not cease. If you want to know who can stop self-immolations in Tibet, I can tell you for sure that it is not the Tibetan people. And it is also not His Holiness the Dalai Lama, who has expressed all too clearly his wish that such protests would cease. The only force that can bring a halt to these protests is the Chinese Communist Party, whose exercise of unyielding ethnic oppression and systematic tyranny has forced our people to rise up in protest.

Silence today can only bring silence tomorrow. Just as Tibetans are taking action, so must the world. In this world of ours, all things and all living beings are connected. When the people of Tibet are oppressed to a point at which they choose the path of self-immolation, this must be a matter of concern not only for the Tibetan people, but for all of humanity.

Chinese artist Ai Weiwei encapsulated this predicament on Twitter, on April 24, 2013: “Tibet is the most serious test for today’s China and for the international communi­ty’s standards of human rights and justice. There is no dodging this test, and there is no getting around it. And thus far, everyone should be disgraced and ashamed at the results.”

Tsering Woeser is a poet, essayist, and blogger, and one of the Tibetan movement’s most prominent voices. In 2011 she was awarded the Prince Claus Prize and the International Women of Courage Award by the U.S. Department of State. She lives under close surveillance in Beijing.

An Open Letter in Solidarity with the People of Belarus

Check out the latest podcast episode from @pen_ev as we speack to 2018 Emerging Voices Fellow Jubi Arriola-Headley about the lack of equity in creative writing learning spaces and how going virtual actually increases access/equity for the fellowship: https://bit.ly/2E1ThTV.

Domestic news in Laos suffers from a lack of current content, extensive censorship and a heavy pro-government bias, citizens in several parts of Laos told RFA in interviews for the 70th Lao Media and Publication Day. https://bit.ly/2CrDXzw

i join this @PENamerica letter, along with a remarkable group of artists and writers, standing with the people of #Belarus. end the violence, release those detained, end repressive rule. https://twitter.com/psadovskaya2020/status/1294374914531745800