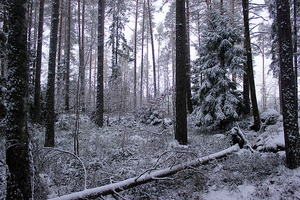 Sophie Seita is the recipient of a 2015 PEN/Heim Translation Fund Grant for her translation of Subsisters: Selected Poems, by Uljana Wolf, whose globalized, border-crossing poetry seems uniquely disposed to translation while also presenting many challenges. In the poem “three arches : böbrach,” the speaker describes the harsh living conditions in an asylum located in the wintry Bavarian Forest.

one also hears the phrase: in die fichten gehen, to get into conifer straits,
to be pulled up by the roots, to become destitute
—Grimm’s dictionary

‘scenic scenery’. so, anyway: to pass around the burden, branches weighed down with blankets of snow, little moan. so the spruces don’t break into silence. because Regen is county seat, declines charge, le vivre et le couvert de neige. accordingly: ‘the location is not our fault.’ only the confines and brightness. the forest writes: ‘willkommen’. the words for this are white or gone like the last bus from the village. at night stillness lumbers in chills: the forest for the foreign

The allocation . . . ought to facilitate the readiness to return to the homeland.
—Art. 6, para. 5 of the Bavarian Asylum Implementation Ordinance

‘not unreasonable’. like wallpaper, where only the eyes wander. like you can’t see the would for the trees, they hand out no papers to you. but promise permits entry soon, and then there’s stammering at the way station. night, the giant cell, bars and unbars itself. inside the hammering, in here the crease: ‘schauen bauen schneien freuen’. this language once was firn, then holidaythingamajig, it sure beams everbody back home. and where’s that supposed to be: ‘don’t care a tittle’, but the schnapps, the schnapps, just a little

paints the scene in the sense of whitewash, or a lustrous façade burns in your eyes. who knows a joke about evergreen fences, who will see the greener side when ‘in distress they shed their needles’. so: cut the cord, the snow is bored, the old keep: ‘exclusively branded goods’. cold sachets, one another into the mouth, as long as they last. beyond the snow blankets still zero reception. only the forest bureau forages duties is up to no good, he takes you in white quoted frogmarch.

note: böbrach is the name of a “home for asylum-seekers,” located deep inside the Bavarian Forest. It’s been heavily criticized in the media for its isolated location and its inhumane conditions.

Uljana Wolf is a German poet and translator based in Brooklyn and Berlin. She is the author of falsche freunde (2009), meine schönste lengevitch (2013), and (with Christian Hawkey) SONNE FROM ORT (2012), and is the recipient of the Adelbert-von-Chamisso-Preis 2016, the Erlangener Preis 2015, and the Peter-Huchel-Preis 2006. Wolf translates numerous writers into German and teaches at NYU, Pratt, Humboldt University Berlin, and elsewhere.

Sophie Seita is the author of Meat (2015), Fantasias in Counting (2014), 12 Steps (2012), and i mean i dislike that fate that i was made to where (2015, a translation of Uljana Wolf). Her work has been exhibited and performed in the US, UK, Ireland, and Germany. She has received fellowships and grants from Cambridge, Princeton, Yale, Buffalo, Columbia, and Queen Mary, among many others.