The PEN Ten: An Interview with Paul Lisicky

The PEN Ten is PEN America’s weekly interview series. This week, Jared Jackson speaks with Paul Lisicky, author of Later: My Life at the Edge of the World (Graywolf Press, 2020). 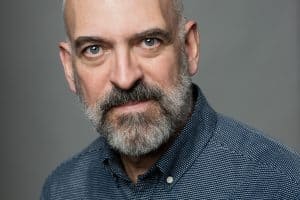 1. What was the first book or piece of writing that had a profound impact on you?
It was definitely Flannery O’Connor’s “A Good Man is Hard to Find,” which I first read as an undergraduate. I was instantly smitten with its boldness and its weird combination of dread, comedy, violence, social critique, and eschatology. It felt like being injected with a dream. And it taught me right away that the most important thing about writing was vision.

2. What does your creative process look like? How do you maintain momentum and remain inspired?
I try to write all the time, even if I’m having a day that doesn’t allow me to sit down for an hour. I’ll write 20 minutes before I teach; I’ll write when I’m in line at the coffee shop or on the subway. I’m always collecting, and when I have some open hours, I sit down and work. When all the poles are in alignment, I can work for up to three or four times a day, but those times are rare. As for momentum? For me, writing is connected to my looking and curiosity. It isn’t a separate animal. So, if I don’t feel inspired, it’s probably because I’m not seeing hard enough, or I’m keeping myself away from situations that jolt me awake. But that’s okay, too. Sometimes perception needs a rest.

“For me, writing is connected to my looking and curiosity. It isn’t a separate animal.”

3. What is one book or piece of writing you love that readers might not know about?
Rebecca Riley’s Repetition is a book that’s important to me. What is it exactly—a poem, book-length essay, or song? Does any of that even matter? It feels elemental in its portrait of deep grief, and my brain holds onto it like a piece of music.

4. What is the last book you read? What are you reading next?
I just finished reading the manuscript of my friend Elizabeth McCracken’s latest collection of stories, and I’m in awe of its tonal range, compassion, and sense of dark, mischievous play from sentence to sentence. Next up is Renee Gladman’s Calamities, which I’ve read at least twice before, but I’m teaching it this coming week, and I’m always delighted by its freshness and spark.

5. What do you consider to be the biggest threat to free expression today? Have there been times when your right to free expression has been challenged?
I keep thinking of the steady erosion of rights and the cultivation of chaos, and I wonder how a sense of ongoing threat can get the best of our minds—weakening us so that we’re too worn out to use their full potentiality. It’s like free expression is snapped off at the root before it’s even had the chance to grow. I think, too, about capitalism’s subterranean role in inhibiting free expression. What happens in systems that tend to elevate a single writer (or two) to stand for a category? How do movements get curtailed when other perspectives within that category aren’t given a full shot at visibility?

“I keep thinking of the steady erosion of rights and the cultivation of chaos, and I wonder how a sense of ongoing threat can get the best of our minds—weakening us so that we’re too worn out to use their full potentiality.”

6. Which writers working today are you most excited by?
I continue to read and love everything by Joy Williams, whose work has been important to me since my early 20s. I love Garth Greenwell, Ocean Vuong, and T Kira Madden for their risk-taking, as well as their emotional and intellectual precision. I’ll always be a Lydia Davis fan, no matter what she writes. Mary Gaitskill, too.

7. Which writer, living or dead, would you most like to meet? What would you like to discuss?
I’d have to say Jane Bowles, although I’d be lying if I’d didn’t say I’d probably be a little terrified of her. I don’t think we’d talk about writing. We would talk about places, because places are states of mind in her work. Emotional ecosystems. We’d talk about Panama and Staten Island and Tangier, and all the places that were simultaneously beautiful and awful to her.

8. What advice do you have for young writers?
I believe in reading widely, but I believe more deeply in developing a core set of revered writers. Find five writers whose work matters to you, and read everything they’ve written: their books, their interviews, their essays. These will be your deepest, truest mentors. Is it possible to identify an individual work’s descriptive textures? What is it up to structurally, from paragraph to paragraph, chapter to chapter? How does it sound when read aloud; what is there to learn from speaking it in your own voice? And its urgency: Why does it need to be written? Does it have a politics?

“The period from 1991 to 1994 felt so near to me, like no other passage in my life. If you asked me what happened before or after that time, my memory would be fairly patchy. I know this has something to do with living so close to death.” 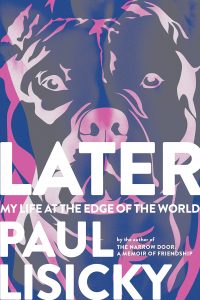 9. In the section “Camera” in the second chapter of your memoir, you describe a group photo of your cohort at the Fine Arts Work Center in Provincetown. Part of it reads, “They don’t look burdened by their pasts, maybe because they’re making work out of those burdens.” Can you describe your approach to making work—writing this memoir—out of your past? Did you feel weighted by it and your past experiences? Was there a transformative process between when the project began and ended?
The period from 1991 to 1994 felt so near to me, like no other passage in my life. If you asked me what happened before or after that time, my memory would be fairly patchy. I know this has something to do with living so close to death; if not my own, then others’ in Provincetown, which was back then a refuge for people with AIDS and HIV. I felt like a sharpened pencil. And maybe I needed to write the book to hold those years at some distance, because they didn’t feel remotely from my imagination at all, even though some decades had passed. I don’t know whether the process was transformative, but I do know that I made space for emotions and thoughts that I’d never allowed into my writing before. I wanted there to be some rage and confusion on the page, and I didn’t feel the old imperative to process ugliness into something that felt tidy.

10. Although it’s a memoir, a reflection of one’s life and experiences, Later is written in the present tense. What were the motivations behind writing the memoir in this present tense, as opposed to the past? How did this decision affect your writing, the way memories resurfaced, and the ones you chose to include? What effect do you want it to have on the reader?
Later was written in past tense in its first draft. It was fairly linear and more conventional in structure than anything I’d written in at least 10 years, but something felt off to me. The past tense made the voice feel too neat and orderly, too resolved. It gave the book an almost contrived sense of perspective. So, I put it aside for a while, and when I came back in, I re-imagined it in present tense and started pulling it apart—by which I mean allowing for small sections that operated in poetic time instead of narrative time. It all felt awkward at first, but that move ended up intensifying the on-the-spotness that I associate with those days, when none of us knew whether our friends were going to be around tomorrow. I think the book feels a lot more precarious for having undergone that shift, and I hope it makes you feel alert and alive.

Paul Lisicky is the author of The Narrow Door (a New York Times Editors’ Choice), Unbuilt Projects, The Burning House, Famous Builder, and Lawnboy. His work has appeared in The Atlantic, BuzzFeed, Conjunctions, Fence, The New York Times, Ploughshares, Tin House, and in many other magazines and anthologies. A 2016 Guggenheim Fellow, he has received awards from the National Endowment for the Arts, the James Michener/Copernicus Society, and the Fine Arts Work Center in Provincetown, where he has served on the writing committee since 2000. He has taught in the creative writing programs at Cornell University, New York University, Sarah Lawrence College, The University of Texas at Austin, and elsewhere. He is currently an associate professor in the MFA Program at Rutgers University-Camden and lives in Brooklyn, New York. His sixth book, Later, was recently published by Graywolf Press in March 2020.