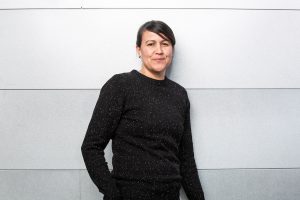 1. What was the first book or piece of writing that had a profound impact on you?
I used to read my mother’s Reader’s Digests from cover to cover, over and over again. My mother also used to throw these at us, if we were in trouble and she either didn’t feel like getting up or had already thrown both of her shoes at us. Those Reader’s Digests impacted me in many ways.

2. How does your writing navigate truth? What is the relationship between truth and fiction?
I am Native, so I am both—truth/fiction—and also bleeding over or overflowing each. Truth is always a placeholder for something. For how we feel, or how we want to feel, how we wished we didn’t feel. Things we wish we’d done, or hadn’t done, hadn’t enjoyed doing. The way we handle or mishandle our wounds, and try to hold them up and look through them, like mirrors, to be seen, no matter how opaque and obstructed they are. You can’t trust truth. But then, even the word trust. . . what is that a placeholder for?

“Free expression is its own threat. It was never intended to include most of us. And it certainly wasn’t meant to include merciless Indian savages.”

3. What does your creative process look like? How do you maintain momentum and remain inspired?
I am lucky for the conversations I am gifted with at home, with my beloveds, with colleagues, and with books. I was raised in a kind of multiplicity, and I need that friction and pressure to move or be moved. The imagination is a momentum, like basketball was/is, riverine and desert-like at the same time. Sometimes, it isn’t about the leap of inspiration; sometimes, it is about refusing and pushing back.

4. What is one book or piece of writing you love that readers might not know about?
A thing I love that I hope others might know and love is The Funambulist Magazine, by the great heart, Léopold Lambert.

5. What is the last book you read? What are you reading next?
I have a lot of books open around the house. Dina Gilio-Whitaker’s As Long As Grass Grows is one I keep re-reading, and I also have an audiobook that I listen to when I drive. I recently re-read Simone Browne’s Dark Matters. I am excited to read Diane Geller’s forthcoming book, Dog Flowers, from One World.

Free expression is its own threat. It was never intended to include most of us. And it certainly wasn’t meant to include merciless Indian savages. It isn’t surprising that most of us don’t have it, or it is being taken away, or becoming narrow. It is finally coming to fruition, meaning this was always the plan for free expression, freedom of speech, and the Constitution in the United States and the Americas. We can’t edit ourselves into or out of empires’ intentions. How can there be any free expression in this country (much less others) when the Supreme Court of one of the largest powers in the world still applies the Doctrine of Discovery to its Native and indigenous peoples? The biggest threat to free expression—to its makers, to this state—is that we imagine it not for our individual selves but for one another. What might happen if I didn’t imagine it for myself but imagined it for others, demanded it for others? I want to learn to fight for something beyond what freedom of expression and freedom of speech have meant, and for whom it was never meant.

7. How does your identity shape your writing? Is there such a thing as “the writer’s identity?”
There is definitely identity. It is mostly projected. And we mostly accept it, let it be our prophecy. I have a line in a poem that says, “I obey what I don’t understand, then I become it, which needs no understanding.” And this is partly what I meant. This country has told me a lot about myself. And not only have I believed most of it, I have become almost all of it. Which doesn’t mean I can’t still become myself, can’t yet be more.

9. Though many things, Postcolonial Love Poem, is an act against erasure. How can writers, and writing, affect resistance movements? What happens when erasure is ignored? 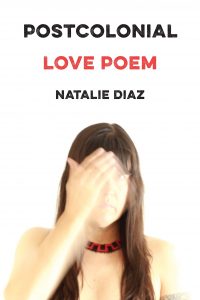 I don’t believe my writing is activism. It is a relatively safe act for me to engage in. To write is an act, just as to erase is an act. But both of these happen, at least in the context of what we are talking about here—my poetry—in the controlled white space of a page. It is what I choose to do off the page, that I wish can be acts of resistance. Maybe the poems are just the practice field for my life.

10. In a 2018 interview with NPR, you stated, “But for me to say Native American, in a way, I’m already erasing myself, you know? Because what I am is something that is, yes, part of this America but also something else, something more, something that America hasn’t quite been able to consume fully.” This feels in conversation with the line in “The First Water Is the Body” in Postcolonial Love Poem, “What threatens white people is often dismissed as myth. I have never been/true in America. America is my myth.” Why do you think America creates myth for what it perceives to be a threat? How does your writing challenge this dismissal, and what power comes from claiming America as your myth?
Every empire is a myth. It is a story about a beginning that is pretending to be itself, but is really a terrible something else. What is patriotism, if not a celebration of forgetting by committing to beginning again and again? Nostalgia is dangerous because it has to keep happening in order to exist—what we pine for, what we ache to return to, is often what we are replicating or enacting now in such violent ways that what we look back toward seems beautiful, and it makes us want to conquer it, build it, and destroy it again.

Natalie Diaz was born and raised in the Fort Mojave Indian Village in Needles, California, on the banks of the Colorado River. She is Mojave and an enrolled member of the Gila River Indian Tribe. Her first poetry collection, When My Brother Was an Aztec, was published by Copper Canyon Press in 2012. She is the 2018 MacArthur Foundation Fellow, a Lannan Literary Fellow and a Native Arts Council Foundation Artist Fellow. She was awarded a Bread Loaf Fellowship, the Holmes National Poetry Prize, a Hodder Fellowship, and a PEN/Civitella Ranieri Foundation Residency, as well as awarded a U.S. Artists Ford Fellowship. Diaz teaches in Arizona State University’s Creative Writing MFA program.