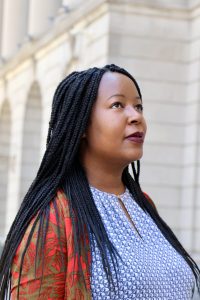 1. What was the first book or piece of writing that had a profound impact on you?
Recently, I remembered how obsessed I was with Julie of the Wolves in fourth grade. Before that, I’d been reading a lot of books about orphaned British children or books about kids in suburban Oregon. It might have been the first piece of fiction I read about a nonwhite girl. It might have been the first piece of fiction I’d read in school about a nonwhite character, besides Sounder, but I don’t think I read that until sixth grade. I know now that it’s not #ownvoices, and there are many things the author got wrong about the culture she was writing about, but back then I was struck by the violence that Julie experiences. I had grown up witnessing violence against women from a young age, and it was always strange to me how I kept getting the message implicitly that I was never supposed to acknowledge or talk about it. Her experiences felt “real” to me in a way no other book had up until that point, but at the same time, I also felt like I was escaping through Julie. In the book, she resists her attacker and runs away to live with animals in the wilderness. It was the first time I remember really wanting to be a character in a novel.

2. How does your writing navigate truth? What is the relationship between truth and fiction?
I usually begin each piece of fiction that I write with an element of truth. It could be based on a real memory or family story, a historical event, etc. But ultimately, I really enjoy melodrama, so it’s always hard for me to stick to that truth. What I realized as I was revising the book was that I have to write until the emotions feel real to me above all else. If I’m writing about an angry character, I’m not done until I personally feel angry. Writing it has to get me worked up. I use fiction as a vehicle to explore real emotions.

“I had grown up witnessing violence against women from a young age, and it was always strange to me how I kept getting the message implicitly that I was never supposed to acknowledge or talk about it.”

3. What does your creative process look like? How do you maintain momentum and remain inspired?
I don’t write every day. I do better when I work out the structure of the story or chapter in my head before I sit down to write. I’m kind of a binge writer, which is not the healthiest way to live. When I’m writing, it takes over my life, and when I can, I’ll write from the time I wake up until I go to bed. Usually, inspiration will come from what I read, but it can come from anywhere. I’m often inspired by history. Right now, I’m collecting vintage postcards from Jamaica. They all feature daguerreotypes from a French photographer, Adolphe Duperly. I’m trying to write a different story inspired by each postcard.

4. What is one book or piece of writing you love that readers might not know about?
I really enjoy Adrian Tomine’s work. Also, Gabrielle Bell. Many of the books that have excited me over the last decade have been graphic novels.

“Writing it has to get me worked up. I use fiction as a vehicle to explore real emotions.”

5. How can writers affect resistance movements?
In order to build a revolutionary consciousness, people have to understand each other and ultimately how our different struggles are connected.

6. What is the last book you read? What are you reading next?

I read The Vegetarian by Han Kang. I’m going to start Brown Girl in the Ring by Nalo Hopkinson.

7. What is the most daring thing you’ve ever put into words? Have you ever written something you wish you could take back?
I consider myself a fiction writer, so when I publish an essay, I have a ton of anxiety for weeks after. I keep waiting for that phone call from my mother where she yells at me for putting too much of our business out there. But luckily, my parents aren’t really curious about the stuff I write at all. If they suddenly become interested, then I’ll probably want to take those essays back.

“Time is not atonement. That was one of the sentences that kept running through my mind as I wrote the book.”

8. What advice do you have for young writers?
Join or start a writing group. Whether you get an MFA or not, you’ll need motivation and support outside of academia. I wanted to give up so many times on this book, but each time I met with my group or took a noncredit class to be around other writers. It helped me refocus.

10. Your novel, These Ghosts Are Family, begins with a big secret. What was behind your decision to expand the story to include eight generations of one family that spans over two centuries? How did one secret ask you to consider the secrets that came before and after? Are secrets better left kept or exposed? 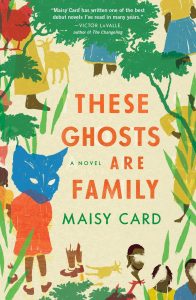 I was thinking about my grandfather as I wrote it. He’s in his nineties now, but he was completely independent until his late eighties. It took me awhile to realize that there’s not a very kind, loving person in there, but by the time he became sick, I had completely written him off. Still, watching him degenerate physically and mentally has of course stirred a lot of empathy in me for him. But I also recognize that empathy is not the same as forgiveness. He needs care, so my family will give him the care he needs, but this new, physically vulnerable version of him doesn’t erase the other versions of him in everyone’s memory. Time is not atonement. That was one of the sentences that kept running through my mind as I wrote the book. People hold on to things for years. As a child, I was extremely sensitive to my parents’ moods, as I think most children are. I could sense that they were angry even if they were making a concerted effort not to show it. I wanted to know where all that anger came from. When my mother was melancholy, I wanted to know what she was thinking about, what dark place she was retreating to, but she wouldn’t tell me. I thought it was me, but as I got older, I understood that they were still reliving experiences that occurred before I was born. That anger, that desire for revenge, that pain has to go somewhere. I wanted to explore those themes—forgiveness, atonement, anger, revenge through one family.

Many of the characters in the book wrestle with these very dark thoughts they have about their own parents, but they have to go there in order to heal. In a way, those negative thoughts are the real secret. When one character in the book, Irene, hears that her mother has died, she worries that she won’t be able to cry at her funeral. She’s so ashamed that she can’t conjure that emotion for her mother, even though her mother was awful to her. She knows how bad it will look. She’s also filled with regret that she never confronted her mother as an adult about her childhood. So many families, like mine, cement their bonds through these codes of silence. It just breeds resentment. To paraphrase Malcolm X, there’s no healing the wound if you won’t even acknowledge the knife is there.

Maisy Card holds an MFA in fiction from Brooklyn College and is a public librarian. Her nonfiction has appeared in Lenny Letter and is forthcoming in School Library Journal. Her short fiction has been published by AGNI, Sycamore Review, Liars’ League NYC, and Ampersand Review. Maisy was born in St. Catherine, Jamaica, but was raised in Queens, New York. She earned an MLIS from Rutgers University and a BA in English and American Studies from Wesleyan University.