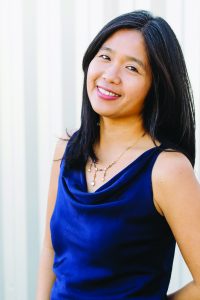 1. What was the first book or piece of writing that had a profound impact on you?
Louisa May Alcott’s Little Women and Laura Ingalls Wilder’s Little House series. Their headstrong heroines were all strivers: my striving from that of an immigrant family’s; Jo March’s born out of fallen fortunes; and Laura Ingalls’ from pioneer necessity. We were outsiders, too: My family was among a handful of Chinese Americans in my suburban hometown east of San Francisco; Jo was a whistling tomboy, and Laura chafed at comparisons to her obedient, golden-haired older sister.

As an adult, after re-reading Little Women, I found it more old-fashioned than I remembered—at times sanctimonious. I’ve also come to understand that the Little House series emerged from an often-tortured collaboration between Laura Ingalls Wilder and her daughter, Rose Wilder Lane, and that the books skipped over the more painful aspects of the family’s history.

That doesn’t change the impact those books had upon my development—how they made me feel more at home because I recognized characters who shared my dreams. What I remembered, what I held onto, is what I needed then to make my way in the world.

2. How does your writing navigate truth? What is the relationship between truth and fiction?
In my journalism and in my fiction, I’ve always tried to shine a light onto untold stories. Stories that might inspire a change in thinking—and a change in action.

For me, fiction flourishes where the official record ends and I can take the imaginative leap of empathy. Stories can compel us not only to enter the heart and mind of an individual character, but also to question just who benefits from systems of power.

“Stories can compel us not only to enter the heart and mind of an individual character, but also to question just who benefits from systems of power.”

3. What does your creative process look like? How do you maintain momentum and remain inspired?
I’m a proponent of what I call “hours of power.” I’m at my most inspired and productive in the morning, and I try to spend that time working on the creative projects that matter to me most. When I’m feeling less than inspired—say, late on a Friday afternoon—I deal with administrative tasks, such as taking care of paperwork.

It’s been said that “sitting is the new smoking”—our sedentary lifestyle is killing us. I try to go for a swim, walk, or a run each day. Feeling off-kilter physically can diminish your motivation. That time away from your computer, with your body in motion, can be important to the creative process. Often, a narrative dilemma resolves itself when you’re not actively thinking about it.

As the mother of twin boys, my time is not my own anymore. I do whatever I can to make the most of the time I have. If I’m commuting or going for a run, I use a PDF-to-voice app to immerse myself in my work-in-progress and to listen for clunky or confusing sentences.

4. How can writers affect resistance movements?
Writing is a form of self-expression, but it can be a political organizing tool that educates readers about another culture. When someone is denied their story, they are denied their humanity. It can also help readers feel recognized and made visible, opening the way for them to tell their stories, too.

5. What is the last book you read? What are you reading next?
I recently finished reading Adrian Tomine’s The Loneliness of the Long-Distance Cartoonist, Bridget Quinn’s She Votes: How U.S. Women Won Suffrage and What Happened Next, and Cathy Park Hong’s Minor Feelings. I highly recommend all three!

“Writing is a form of self-expression, but it can be a political organizing tool that educates readers about another culture.”

6. What is your favorite bookstore or library?
I can’t pick just one! In the Bay Area, we are blessed with amazing independent bookstores. Both my launches have been at Booksmith in San Francisco, and I’ve also been fortunate enough to take part in events at City Lights, Books Inc, Book Passage, Green Apple, and Copperfield’s, among others. I also love Mrs. Dalloway’s, Orinda Books, and A Great Good Place for Books. I could go on and on.

As for libraries, I’ve been to many throughout the Bay Area, often to attend the wonderful free children’s programming with my sons. I’m at the local library at least once a week, and I’d also love to give shout-outs to the San Francisco Main Library and Berkeley Public Library, with their many treasures for people from all walks of life.

7. How does your identity shape your writing? Is there such a thing as “the writer’s identity?”
I’m the American-born daughter of Chinese immigrants, and from early on, I understood that world inside my home was different than the world outside of it. I searched for answers by reading books and through observation, following where my curiosity led me. That double-consciousness underpins my writer’s identity.

8. What advice do you have for young writers?
Foster literary community. Attend and organize readings at your favorite local independent bookstore, subscribe to or read literary magazines, form writing groups, volunteer at literary festivals, and visit your local library. Raise money for common causes you believe in. You will find friends with whom you can commiserate and celebrate, and they’ll show up in force for your events, just as you have shown up for theirs. Everything I put out in the world to help others; I get back ten-fold.

“I searched for answers by reading books and through observation, following where my curiosity led me. That double-consciousness underpins my writer’s identity.”

9. Your last book was the riveting novel, A River of Stars. As someone who has published a story collection and a novel, do you have a preference, and do you find one more difficult than the other? How does each form illuminate the human condition differently?
I love working in both forms. A short story, to my mind, is closer in form to a poem—in the intensity, in how it can rest upon a defining image or moment. After the last page, the energy continues to resonate. A novel is a journey; the end, for the reader—and the author— feels like a destination.

Both A River of Stars, and my forthcoming novel-in-progress, began as short stories. Novels aren’t long short stories, of course, and I would/could not expand every one of my short stories into a book-length form. Mentally, though, when I’m starting out, it’s easier to tell myself I’m writing a few pages than grappling with a 300-page project that will take years to finish. 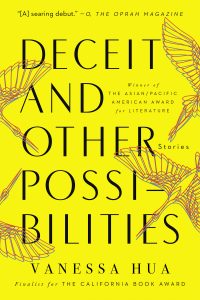 10. Your story collection, Deceit and Other Possibilities, which was first published in 2016, was just republished by Counterpoint Press and includes new stories. How did you approach crafting the new content to fit the thread shaped in the original collection? Are the new stories ideas you wanted to pursue originally? Did they manifest from re-reading the collection and spark new voices?
For the first edition, I wrote the stories one by one over a period of about a decade. It wasn’t until I finished and read them together, as a whole, that I realized they shared a common theme of secrets and lies. Some characters think deceit is necessary to keep up family harmony; for others, the lies are self-deception and justification.

The reissue has three new and previously uncollected stories including one I began writing in college and revisited from time to time over the years. I just couldn’t quit it! At last, though, I figured out how to finish the story. All three additional stories reflect my enduring preoccupation with family, duty and responsibility, and reinvention.

Vanessa Hua is a columnist for the San Francisco Chronicle and the author of A River of Stars. She has received a Rona Jaffe Foundation Writers’ Award, the Asian/Pacific American Award for Literature, the San Francisco Foundation’s James D. Phelan Award, and a Steinbeck fellowship in creative writing. Her work has appeared in publications including The New York Times, The Atlantic, and The Washington Post. Find out more at vanessahua.com.