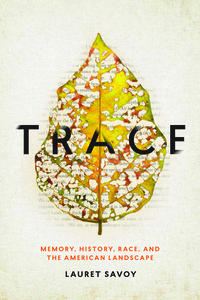 The following is an excerpt from Lauret Savoy’s memoir Trace. An exploration of history, race, and the American landscape, it was longlisted for the 2016 PEN Open Book Award. Read the PEN Ten interview with Lauret Savoy here.

From what do we take our origin? From blood?  I am the child of a woman with deep brown skin and dark eyes who married a fair-skinned man with blue-gray eyes. Yet as a little girl in California I never knew race. Skin and eye color, hair color and texture, body height and shape varied greatly among relatives. Like the land, we appeared in many forms. That some differences held significance was beyond me. Instead I devised a self-theory that golden light and deep blue sky made me. Sun filled my body as it seemed to fill dry California hills, and sky flowed in my veins. Colored could only mean these things.

On that drive east from the Punchbowl I realized how little I knew of my family as an organic unit held together by shared blood, experience, or story. I was born to parents already in middle age. They had come into the world before moving pictures talked, before teamsters drove only horseless trucks, before the iceman had to find a new profession. And they’d lived with elders who could recall life before the Civil War, memories lit by lantern light. Though nearly palpable, their pasts never spoke to me. Dad died before I had the questions. In response to them, Momma said she couldn’t remember. She wondered why I wanted to know.

From what do we take our origin? From incised memories?

Near the end of her life my father’s mother visits us in California, sharing my room. I’m nearly five years old. Slow, tidy with words and her things, ancient to me, Guma brushes her graying chestnut hair each day. It falls below her knees. I like to lean into the back of her thighs, grasping her legs to feel her flesh warm my face. Gu-ma’s hair covers me, hides me. Each night I pray for long straight hair like hers, and for her eyes—my father’s eyes—so I might see through sky, too.

Second-grade recess, Campus School playground, Washington, D.C. I stand by empty swings. A classmate walks up to say “You’re colored, aren’t you?” I nod yes to what really isn’t a question. Troubled by how ugly Bobby Kane could make sun-light and sky-blue sound, I run to Sister Mary Richard Ann. That evening I ask my parents.

Home, many a workweek night. My father sits in his easy chair, alone in the back room, a glass of gin or scotch in one hand, cigar or cigarette in the other. The only light the inhaling burn. What he sees or thinks, I don’t know. What I remember? Smoke. Silence.

One: Our textbook describes the unsuitability of Indians, who wasted away, and the preference for Africans, who thrived as slaves and by nature want to serve. I ask my teacher, Mrs. Devlin, if I might become a slave.

Two: We read in class that Indians are savages who had to give up their land and their wasteful way of life for the sake of civilization. The book calls this part of Manifest Destiny. Confused again, I ask what made the “five civilized nations” civilized?

Imagine searching for self-meaning in such lessons. Am I civilized? Will I be a slave? The history taught wasn’t the history that made me, but I didn’t know this. Any language to voice who I was, any knowledge of how land and time touched my family, remained elusive.

Once we moved to Washington, D.C., in the late 1960s, I came to learn how “race” cut our lives. Black, Negro, nigger! came loud and hard after the 1968 riots. Words full of spit showed that I could be hated for being “colored.” By the age of eight I wondered if I should hate in return.

What I couldn’t grasp then was that twining roots from different  continents could never be crammed into a single box. I descend from Africans who came in chains and Africans who may never have known bondage. From European colonists who tried to make a new start in a world new to them. As well as from Native peoples who were displaced by those colonists from homelands that had defined their essential being.

As the nineteenth century ended, family members by blood and marriage had dwelled in rural Virginia, Maryland, Alabama, perhaps Oklahoma, and Montana ranchland along the Yellowstone River. They came to live in cities like Washington, D.C., and Harrisburg , Pennsylvania. But how they experienced the world or defined themselves in it remained unknown. Forced removal, slavery, and Jim Crow were at odds with propertied privilege. Forebears had likely navigated a tangled mélange of land relations: inclusion and exclusion, ownership and tenancy, investment and dispossession. Some ancestors knew land intimately as home, others worked it as enslaved laborers for its yield. What senses of belonging were possible when one couldn’t guarantee a life in place? Or when “freed” in a land where racialized thinking bounded such freedom?

As I crossed the Continental Divide, the questions became so urgent they soon composed the journey. High in Colorado’s Rocky Mountains, where the Arkansas River rises, I decided to try to trace family, and myself, from storied places and recorded history. But where to start?

Watching the Arkansas’s headwaters begin to carry mountain detritus toward the plains, I suspected this river could guide me. So by its drainage I plotted a meandering course toward Oklahoma, where an elderly cousin of my mother’s had once told me some ancestors might have lived.

Lauret Savoy is a woman of mixed heritage and a professor of environmental studies and geology at Mount Holyoke College, where she explores the intertwining of natural and cultural histories. She writes about the stories we tell of the origins of the American land and those we tell of ourselves on this land. Her other books include The Colors of Nature: Culture, Identity, and the Natural World, Bedrock: Writers on the Wonders of Geology, and Living with the Changing California Coast. She lives in Leverett, Massachusetts.

I'm shocked and distressed to see my friend @SalmanRushdie has been attacked before a talk. He's a good man and a brilliant one and I hope he's okay.

I hope Salman Rushdie is okay.