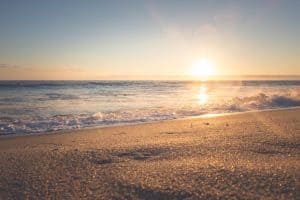 Latifa Ayad’s “Out and Out” is the winner of The Masters Review‘s Spring 2017 Flash Fiction Contest. The Masters Review is an online and print publication that celebrates and promotes new and emerging writers. Ayad is a Libyan-American writer born and raised in Sarasota, Florida. She holds an MFA in Fiction from Florida State University.

My father couldn’t pick a beach. They were lined up, one against the other, separated by strips of concrete. He kept saying, “The next one, the next one.” The first had too many topless women. The next had more topless women, and chip bags and plastic bottles riding in and out on the waves. “The next one.” We stopped at the fifth beach, after my father resigned himself to the fact that topless women simply cannot be avoided in Barcelona. He ducked his head and charged to the strip of sand right by the water, which was empty except for the garbage and two naked children, a boy and a girl. I must be more like my father than I thought, because the boy’s tiny, flopping penis embarrassed me, and I couldn’t stop looking at it.

I was embarrassed too of my clothes, all a searing aqua blue, flowing pleated mermaid pants, a long-sleeved rash guard that covered to my wrists, my hijab too aqua blue, cotton and tight around my face so even a wisp of hair wouldn’t escape. When I’d dressed in the hotel I thought how the blue brought out my eyes, but here I could feel eyes on me.

I sat next to my father’s glasses, which he had removed so he could stare up at the beach without really seeing. He splashed water over his head, then started to make wudu, to cleanse his body for prayer. My father loved to make wudu out in nature. Something about it, a connection to God’s earth. He rubbed water over his right hand three times, his left three times. His face three times, then he swished and spit the salt water. My father once told me that if you didn’t have water you could make wudu with anything, with air, even, if you were really in a pinch. In the desert you could make wudu with sand. I dug in the sand at the shoreline, rubbing its grit three times over my right, three times over my left. If you make wudu with sand you don’t have to swish it between your teeth, like you do with water. Just touch it to your lips. I didn’t do either, just kept digging and rubbing the sand over my hands, which slowly became encased in a silvery gold. Later would I learn that the sand on that beach was laced with pyrite. But then I only knew that, in Barcelona, when I turned my hands from side to side, I glistened.

In the water, I opened my eyes to the salt and watched flakes of gold swirl around me. My pants twisted around my ankles but I turned and floated easily on my back. My father had told me, earlier, that the Mediterranean is saltier than the Gulf. I marveled at my weightlessness and wondered why my father hadn’t stayed here in Spain when he’d first escaped Libya, why he would ever leave a place where you could swim out and out and never sink. But of course, I knew.

My father dragged me from the water when two topless women with small, modest breasts started playing volleyball right by the shore. My father pocketed his glasses and held my hand as we crossed the beach, as if he were afraid he might lose me, as if I were still a child, as if something here might tear me away from him or swallow me up. And of course it would, less than a year later, when I remembered the weight of my wet clothes as I dripped my way back to Las Ramblas. It wasn’t that I didn’t want to be a Muslim anymore, or that there was no merit in modesty. But weren’t the women on the beach modest, too, in their own way, in their union with the sand and the sun and even the garbage in the water? And me, I was the one who was different.

Back home in Florida, I would be too afraid to visit the beach, until a cold day in January when I would contemplate the Gulf from a secluded strip of sand and decide that this isn’t how it should be, that the water and sand belonged on my skin, not on a swathe of aqua blue fabric, and I would strip to my underwear and wade in and feel the cold water electric pulsing through me.