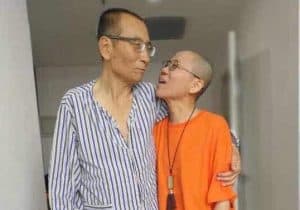 A rare image of Liu Xiaobo and Liu Xia    together, days before his death

Liu Xia, poet, artist, and founding member of the Independent Chinese PEN Center, has been under house arrest in China since 2010. Today, despite the Chinese government’s assurances that she is free, we are gravely concerned about her health, safety, and freedom.

Liu Xia is a distinguished poet and artist and is also well-known as the wife of Liu Xiaobo, who died from liver cancer on July 13, 2017. Liu Xiaobo, a high-profile writer and dissident, had been imprisoned since 2008 for his writings and for his call for democratic reform in China. In 2010, the Nobel Committee announced that Liu Xiaobo would receive the Nobel Peace Prize; the next day, Chinese authorities placed Liu Xia under house arrest without any legal justification and with the clear goal of controlling Liu Xia and preventing her from being a voice for her husband’s freedom.

For years, Liu Xia has been under constant surveillance and lives in almost total isolation, cut off from friends, family, and the outside world. Occasional reports from those who manage to contact Liu—at risk to themselves—indicate that her physical and mental health has deteriorated considerably as a result of her unjust confinement. Liu Xia reportedly suffers from a serious heart condition, as well as depression from the treatment to which she has been subjected.

In 2013, Liu Xia’s brother was arrested on fraud charges that are widely believed to be politically motivated, another way of punishing her. Leaving the courthouse where her brother was being tried, Liu Xia was able to shout out a message to journalists and supporters: “I am not free. If they tell you I’m free, tell them I’m not free.”

In June of 2017, Liu Xiaobo was released on medical parole with terminal liver cancer and died mere weeks later, after Chinese authorities denied him the opportunity to travel abroad for cancer treatment, choose his medical care, or have unmonitored and unrestricted access to his family and friends. His ashes were scattered in a highly-staged state ceremony, followed by a propaganda-style press briefing in which Liu Xia was noticeably absent.

Today, in the aftermath of her husband’s death, Chinese authorities claim that Liu Xia is a free woman. But friends who have tried to contact her have failed. Reporters who have tried to visit her home have been forcibly stopped by plainclothes security agents. It appears that, after years of suffering, Liu Xia is still being controlled, restricted, and silenced by China, at the expense of her human rights and her health. She remains unable to speak or travel freely.

For years, Liu Xia has been punished for her husband’s work, and for her refusal to denounce the man she loved. Now it appears she is still being punished, although she has committed no crime. The Chinese government tells us she is free. We must respond by telling them she is not free.

Send a tweet to tell U.S. Ambassador to China Terry Branstad to demand the release of Chinese poet Liu Xia »