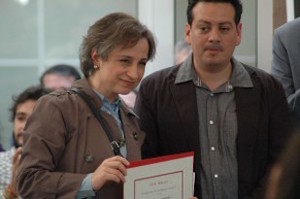 PEN laments the huge vacuum left in the country’s daily information by the dismissal of Carmen Aristegui (winner of PEN Mexico Prize 2014), and of colleagues Daniel Lizárraga and Irving Huerta.

We hope that very soon Aristegui will find a new platform from which to inform, and that the conflict that led to this expulsion from the news will not infringe on freedom of expression, which is the basis of all democracy.

Aristegui was dismissed from MVS Radio after she gave them an ultimatum demanding the reinstatement of two investigative reporters on her team or she would leave the broadcaster. The two were fired for using the company’s name without permission in their work on MéxicoLeaks, a platform created to enable the exchange of information exposing governmental corruption.

Hard-hitting Mexican investigative journalist, Carmen Aristegui, is known for her work on radio station MVS Radio, TV station CNN en español, and opinion articles in Reforma newspaper. Last year, her report on the First Lady’s purchase of a mansion from a government contractor caused scandal. The story sparked allegations of conflict of interest, which the president denied. In February she accepted a PEN México award for an anonymous Aristegui journalist who revealed how the President of the PRI in Mexico City recruited women for sexual services with public money.