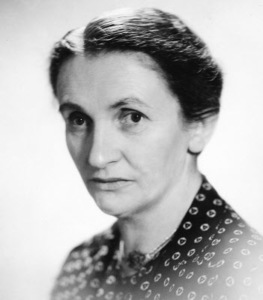 Kurt Beals is the recipient of a 2014 PEN/Heim Translation Fund Grant for his translation of Regina Ullmann’s The Country Road. Read an excerpt of the translation here.

Regina Ullmann is not a household name, even in the world of German (more specifically, Swiss-German) literature. When New Directions first asked me to give them my opinion on her book Die Landstraße (The Country Road), which had been reissued by the Swiss publisher Nagel & Kimche, I wasn’t sure what to expect. My first impression came from the slightly grainy black-and-white photograph of Ullmann’s eyes that gazed out at me from the cover of the Swiss edition.

It was not a welcoming gaze. Ullmann seemed to be warily sizing up her would-be reader, hesitating as she gathered the nerve to speak, and her one lazy eye made the photo all the more unsettling. Although the picture, to judge by Ullmann’s age, must have been taken several decades into the twentieth century, it recalled the earliest days of photography, when every portrait seemed to show a ghost.

This first impression was not far off the mark with regard to either Ullmann or her work. As the painter Lou Albert-Lasard once wrote, Ullmann seemed to come “from another time, another world. She sat there stiffly, with her hands folded like a peasant.” In her stories, too, we hear echoes of an archaic past, and Ullmann’s narrators share her wary distance from the world. In the title story of the collection, the narrator enters a tavern, hoping to find food or drink, but recoils in horror at the sight of another guest:

“It was death! Yes, it was death! As much skin and flesh still clung to him as to a dying man. Only his hours were numbered. But perhaps they had been numbered for many years and months. Consumptives die slowly. The way he sat there in the dark, though wrapped in a raincoat, he was death himself, to put it kindly.”

Another story, “The Old Tavern Sign”—perhaps the masterpiece of this collection—begins as a folk tale might: “Some years ago, in a hidden corner of Styria, there stood an old tavern.” But by the end we have seen nature at its coldest, a brutal scene that seemed to play in slow motion in my mind as I read it. This is the story that inspired Rainer Maria Rilke to write:

“I have never known this before in her work—it brought tears to my eyes […] this was what I had been waiting for, this final emergence of the power of her artistic will. Now it was there: Victory! Victory!—I wrote to her.”

Rilke would continue to champion Ullmann’s work until his death, along with other notable admirers including Thomas Mann and Hermann Hesse. Yet she remained what we today would call a “writer’s writer” or an “outsider,” even taking up beekeeping at one point when her writing failed to support her.

In some ways, Ullmann’s continued obscurity is no surprise: she was a Swiss woman writer of short stories set in rural locales, in an era known for its male writers and their big city novels. But this obscurity seemed more and more unjust to me as I continued to read her stories. I was drawn in by their jarring twists, their sharply honed language, their unforgiving and uncompromising judgments of human character. I hope that my translation will allow new readers to be unsettled, startled, and amazed by Ullmann’s brilliance, as I was when I first read these stories, and as I continue to be each time I return to them.