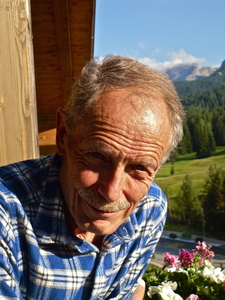 In Paris and throughout France, millions took to the street last Sunday in support of freedom of expression. And yet, in Italy, at the end of this month, one of Europe’s best-known authors will soon be tried for a crime of opinion. For exercising his right to free speech, Erri De Luca could well be sent to prison for as long as five years. The official charge is “istigazione a delinquere,” or instigation to commit crimes.

The Italian writer has long supported the resistance movement of Italy’s Susa Valley in its effort to stop the construction of a high-speed train line (or TAV) from Lyon to Turin. There are multiple reasons for opposing this construction—the project’s redundacy, its fiscal irresponsibility, evident corruption, among others—but the cause is first and foremost ecological: the proposed TAV line would involve tunneling through mountains full of asbestos deposits. As such, those who oppose this construction are principally motivated by an effort to protect the region from an ecological disaster.

During an interview with the Huffington Post in Italy, published on September 1, 2013, De Luca commented that “the TAV should be sabotaged” and that such measures had become “necessary in order to make it understood that the TAV is a harmful and useless project.” On February 24, 2014, following a complaint lodged by the French construction company LTF, responsible for building the TAV, the officers of Italy’s elite anti-terrorism unit delivered an indictment to De Luca’s home. His trial is set to begin in Turin on January 28, 2015.

I recently helped the author with the English translation of A Dissenting Word, his book-length essay on the case (Feltrinelli, 2015). In it, De Luca notes that he “became anarchist after reading George Orwell’s Homage to Catalonia,” and that his sentiments have remained unchanged. He continues:

“I’m trying to imagine what might move a youth today to throw himself into a struggle that has been denigrated and suppressed on a massive scale, like that of the Susa Valley. A young person from elsewhere in Italy would have to risk name, reputation, and a criminal record in order to take the side of the NO TAV movement in the Susa Valley.

Perhaps such a person doesn’t need an Orwell telling stories of epic battles waged by the people. For such a person to join in, just knowing there are people with the civil and popular will to resist is enough.

But if, on the reading list, there does happen to be a present-day Orwell priming the fuse, I would like it to be me.”

As frank and—to my mind at least—as admirable as comments of this sort are, they may not much help De Luca’s defense. Yet precisely what is the charge here? Are writers who care deeply about justice no longer supposed to inspire, and should governments have the power to label such inspiration “instigation”? Events around the world, not simply in Paris, demonstrate daily that the sort of speech that needs defending is that which challenges accepted opinion. One may well disagree with an opinion, but any action taken to repress it, rather than simply to argue against it, is itself a form of violence, and leads only to further violence.

In the closing pages of A Dissenting Word, De Luca notes that, no matter what happens in his trial, the real victim is Article 21 of the Italian Constitution—its free speech clause. He concludes:

“I am, and I will remain, even if convicted, a witness to sabotage. Namely: to the hampering, to the obstructing, and the impeding of the freedom to dissent.”

In Italian, as in English, the word “sabotage” is derived from French, and its meaning is inseparable from the historical context of French resistance to Nazism during the Second World War. On the streets of Paris, I joined well over a million people marching, many holding up pens in their clenched fists. That day all across France, and in other European countries as well, marchers also took to the streets, fists raised, brandishing their pens. And yet, as inspiring as the day was, the pen should serve as an instrument of progressive change, and not just a symbol. So let’s use them.