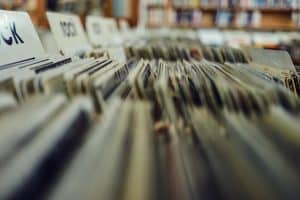 I’ve always turned to archives when I’m feeling fried on writing. As a college student, I spent more hours than I care to admit going through microfiche, through special collections, looking for nothing in particular. I liked the going through. I liked the not-quite reading, not-quite autopilot of getting lost inside a container of information. Later in grad school, when I was trying to balance writing and teaching (and editing and translating), I would put off all of these things by pulling records, instead, from the Woodberry Poetry Room’s vinyl collection, memorizing the poems and accents of favorite mid-century writers. I still go to certain favorite haunts—PennSound and UbuWeb—when I get distractible and restless, preferring these capsules of content over the loud cafeteria of my social media feeds.

Now I can add to my rotation the PEN America Digital Archive, which is set to become the definitive public resource for literature and advocacy. With over 1,500 hours of audio and video footage from more than 2,200 writers dating back to 1966, it is richly explorable—with about 80 percent of the 676 events featuring the intersection of literature and free expression. It is a detailed and growing study of writers’ engagement with key moments in our history—from the Cold War to the dawn of the Civil Rights era, through the Vietnam War, the AIDS epidemic, and September 11.

Reading and listening can be necessary self-care for writing—a kind of work it is easy to burn out on, since so much of it happens after and around the workday, the many other kinds of work that call upon your language-making. And it is work, like activism, which is inherently imperfectible—work you do, in many ways, to do more of. I find archives strangely comforting, I think, because they are reminders of what’s recurred and changed, reminders that others were grappling similarly in the past and theirs are the shoulders we stand on.

Going through the PEN America Digital Archive, I’ve been struck by the timelessness of certain issues. We are still a nation of both immigrants and xenophobes. American exceptionalism still enacts violence abroad and at home. The personal has never been apolitical. There are countless places in this content to connect specific issues of the past with those of the present, but here are just three to get you started.

“To Say What Nobody Else Has the Nerve to Say”

An excellent talk from 1982 on intersectionality across race, ethnicity, sexuality, and class—and the extent to which attendant social-cause frameworks must be brought together, and the many ways writers have worked toward this. Listening to the diverse experiences represented among the speakers—Lidia Falcón, Marge Piercy, Barbara Smith, and Luisa Valenzuela—I am reminded of the ongoing, coalitional work that groups like the Women’s March, winner of the 2017 PEN/Toni and James C. Goodale Freedom of Expression Courage Award, address in principles for unity and allyship.

“Myself, I need all three equally old radical collections of theory and practice: Marxism, anarchism, and feminism,” Marge Piercy shares. “You’ll never hear me talking about control of the means of production without talking about control of the means of reproduction.” Her insistence that representing one’s personal history is necessary to an intersectional activist practice is something Barbara Smith echoes in describing her own work.

“Oppression is very complex,” she reminds us, before going on to describe the ways she has been particularly marginalized as a black, woman-identified lesbian from an impoverished background. “To be the kind of activist that I aspire to be is to say what nobody else has the nerve to say and not back down.”

“The Massacre of the Peaceful”

I’m tremendously moved by this marathon reading from 1985 in recognition of the first International Writers for Peace Day, featuring figures like Allen Ginsberg and Grace Paley, legendary for their anti-war activism and writing. One participant who was exhilarating and new to me was Maurice Kenny, a gay poet with ties to the Mohawk and Seneca peoples. Kenny reads a couple of poems, “I Am the Sun” and “Graveyards,” which reference historic and contemporaneous violence against indigenous communities, like the Massacre at Wounded Knee in 1890 and the standoff which occurred there in 1973 between police and protestors. His summoning in poetry of both the natural world and the commercial world—the encroachment of suburbs and shopping malls—resonates powerfully with the Standing Rock protests of the Keystone XL Pipeline, reminding us of the threats posed by capitalism to indigenous ways of life.

“The Ideas We Are Afraid Of”

Here’s a precedent for literary protest and the work PEN America has done for events like Writers Resist and Banned Books Week. “An Evening of Forbidden Books & Forbidden Writers” includes the work of writers barred from the United States on the basis of ideology, owing to Section 28 of the McCarran-Walter Act. Passed in 1952 to keep out “communists, anarchists, and subversives,” the activist Patricia Derian explains that in practice, the law illuminates the dangerous anxieties of “a period which recurs from time to time in American history where we are deadly afraid of strangers.”

That luminaries like Gabriel García Márquez, Carlos Fuentes, Franca Rame, and Pablo Neruda would be barred from entry into the country is now almost unthinkable. But the fear behind Section 28 persists in legislation like Arizona’s HB-2281, which suppresses Mexican-American and ethnic studies course texts from curricula, on the basis of transgression and ethnic solidarity.

On the Launch of the PEN America Digital Archive