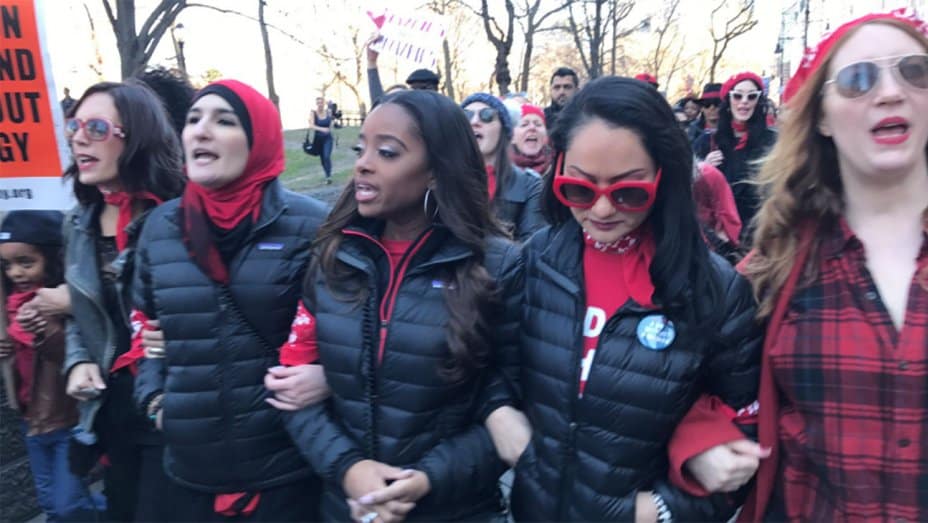 Photo by the Women’s March

The Women’s March, which took place in Washington, D.C., and in cities around the nation and the world on January 21, 2017, mobilized millions of women and men of all races, creeds, sexual orientations, gender identities, abilities, and disabilities to use the weekend of the inauguration to, as the organizers said, “send a bold message to our new government on their first day in office, and to the world that women’s rights are human rights.” More than two million people joined the Women’s March worldwide, with a staggering 1 in 100 Americans marching in solidarity for human rights, dignity, and justice.

National Co-Chairs Bob Bland, Tamika D. Mallory, Carmen Perez, and Linda Sarsour, along with a dynamic, powerful, and diverse group of national organizers, helped galvanize a potent global movement to resist infringements on the rights and dignity of women and many other groups, and to issue a clarion call that Americans would not sit back in the face of threats to values and freedoms. The Women’s March moved beyond an assertion of the power of women, growing into a symbolic assertion of the resistance movement.

“The Women’s March convinced Americans that mass civic action was possible. If not for the Women’s March, people would not have flooded to airports over a weekend to reject a discriminatory visa ban just days later. We honor the Women’s March for acting at a critical moment to overcome the inertia and fear of failure that can impair public mobilization, and for inspiring millions in America and around the world to do the same.”

Facts about the Women’s March: