On the Launch of the PEN America Digital Archive 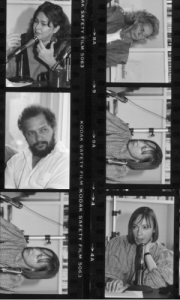 The following origin story is adapted from writing by Antonio Aiello, the former web editor and content director of PEN America, who led the digital archive project.

The PEN America Digital Archive project began with a brawl.

Not a Norman Mailer, Rip Torn brawl with head punches and savaged ears, but a verbal brawl more along the lines of Norman Mailer and Gore Vidal on the Dick Cavett Show.

It was December 2011, and a group of PEN America staffers, led by former web editor and content director Antonio Aiello, had journeyed to Princeton University to dig through the PEN America Archives held in the Firestone Library’s Rare Books and Special Collections department. Sold to Princeton in 1994, the PEN America Archives date back to 1921 and consist of hundreds of paper documents, photographs, and audio and video recordings. Our staff was planning an online retrospective in celebration of PEN America’s 90th anniversary and hoping to find archival materials for the feature—materials that could tell the story of PEN America’s evolution from literary supper club to global advocacy organization and anchor of the literary community.

Arriving at the small, sun-filled reading room, eager to dive into recordings featuring the likes of Pablo Neruda, Susan Sontag, Toni Morrison, James Baldwin, and many more, our staff met a dead end: Princeton denied us access to the recordings. A loud argument ensued. Our staff insisted on seeing the collection; both the archivist and the curator said no. Our staff begged. The curator stood his ground. The recordings had been deemed so vulnerable that a single spin of a record through a player could cause irreparable damage that would render the recording unusable.

In an era that boasts increasingly available digital content, our staff was alarmed to find PEN America’s documents so difficult to access. The curator was right to protect the collection, but what this meant was that primary source materials—materials that captured the words of literary lions, cultural figures, and much more—were inaccessible not only to PEN America staff, but to anyone who wanted to study these moments in time. What did that mean, our staff wondered, for how historical and cultural movements are studied, remembered, and preserved?

In the months that followed, our staff pored over PEN America’s paper archives, finding letters, meeting notes, and a few marked-up speeches—like the speech by Jewish playwright Ernst Toller, given at the 1933 International PEN Congress, in which he called out the delegation from the German PEN Club for not standing up against the increasingly violent persecution of writers, artists, and scholars for their political and religious affiliations. At the same time, our staff uncovered even more audio and video materials unseen and unheard for decades tucked away in our office storage unit. All this made two things very clear: that PEN America had rare, culturally valuable materials in its possession that were inaccessible to the public and that these materials, more than simply telling the story of the organization, contributed to the stories of literary, arts, and human rights movements across the decades.

With the generous support of the Andrew W. Mellon Foundation, the National Endowment for the Humanities, the National Archives, and others, PEN America took on the work of preserving and digitizing the most high-risk materials—over 1,500 hours of audio and video material. Aiello and his team envisioned a single online repository for all of the organization’s archival holdings that could serve as a resource for both scholars and academics, as well as the general public.

In October 2015, PEN America hired Conrad Lochner as project manager for the digital archives. Lochner oversaw a team of catalogers, web developers, and video engineers that worked to assess and catalog assets, optimize audio and video materials, and design the website that would house the digital archive collection. Today, after more than five years, we are thrilled to release the PEN America Digital Archive to the public.

At a time when history, facts, and the value of the humanities is under attack, the PEN America Digital Archive provides a rich trove of raw materials that will help students, scholars, historians, and an intellectually curious public better understand the social and cultural contexts for many of the most significant moments of the past six decades. From Pablo Neruda’s first visit to the United States, to Haruki Murakami’s first-ever public speaking engagement, to the first U.S. writer’s demonstration in support of Salman Rushdie, the multimedia materials found in the archives are a testament to the profound impact writers have had on the history of our nation and of our world.