Konstantin Raikin: “It will offend someone, so what?” 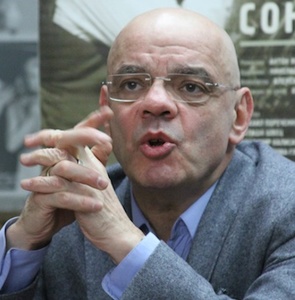 Over the past few years, restrictions on various forms of expression—including scholarship, art, and theater—in Russia have continued to expand. An increasing number of cases such as suing theater directors allegedly violating religious feelings, outraging famous writers, and imprisoning bloggers all raise concern about the state of free expression in the country. Just yesterday, Kommersant, a business and politics newspaper in Russia, reported that LinkedIn, the world’s largest online professional social network, is at risk of being blocked in the country.

In January, PEN America released Discourse in Danger: Attacks on Free Expression in Putin’s Russia, a report documenting the Russian government’s campaign to constrain free expression by limiting public access to information, closing avenues of civic engagement, and populating discourse with approved ideas. In tandem, PEN America hosted a delegation in New York of prominent Russian writers and publishers who shared from the inside how censorship and the closing of the creative space are being used to control the narrative of the past and the present.

On Monday, Konstantin Raikin, son of the great Soviet theater personality Arkadiy Raikin and a Head of the Moscow Satyricon Theater, gave a speech at The Union of Theatre Workers of Russia about the government’s “fight for morality” and the resulting censorship faced not only by the creative class but by all Russians. In his speech, Raikin urged theater professionals to unite and resist government attacks on artistic freedom. The speech, delivered in Russian, has been translated to English for the first time by PEN America’s Polina Kovaleva.

I am going to be eccentric, so to speak. Because I’ve just gotten back from rehearsing, I still have an evening performance, and I’m a bundle of nerves as I’m used to coming to the theater in advance and to preparing for the play that is played that night. Also, it is rather difficult to talk quietly on the topic that I want to [talk about right now]. First, today, October 24, is 105th birth anniversary of Arkadiy Raikin. I congratulate all of you on this occasion, with this date. And, you know, I’ll tell this, my dad, when I realized that I would become an artist, taught me one thing: he somehow has put in my mind such a thing, he called it “the guild solidarity.” This is the kind of ethics in relation to those people who do the same thing as you. And I think now is the time to remember all about it.

I’m very much worried—as I believe all of you are—about what is happening in our lives right now. These, so to speak, assaults on art, on theater in particular. These completely lawless, extremist, arrogant, aggressive actions, hiding behind the words of morality, and all kinds of good and lofty words: “patriotism,” “homeland,” and “high morals.” These groups of people who were allegedly abused, who close theater plays, close exhibitions, very arrogantly behave, and it is somehow very strange that the government stays neutral—distancing. It seems to me that this is a hideous attack on artistic freedom, on the prohibition of censorship. And the prohibition on censorship—I don’t know what everyone of you thinks of this—I think this is the event of the greatest significance in our lives, in the artistic and spiritual life of our country. This [censorship] is a curse, and centuries of shame for our culture, our art—finally, it was banned.

And what happens now? Now I can see how this is clearly someone itching to change and to go back. And go back not just to the times of stagnation, to even more ancient times—to Stalin’s time. Because our immediate superiors speak to us with this Stalin’s language, Stalin’s settings—unbelievable! This is how officials talk; my immediate superiors, [First Deputy of the Minister of Culture Vladimir] Aristarkhov talks this way. Although he, generally speaking, needs to be translated into Russian from “Aristarkhov language” because he speaks the language, which is simply a shame to be spoken on behalf of the Ministry of Culture.

We sit and listen to it. We what? We cannot somehow speak up together?

I understand, we have quite different traditions—in our theatrical business, too. We are very fragmented, it seems to me. We are not enough interested in each other’s lives. But it’s not this that is bad. The main thing is that there is such a vile manner to rivet and snitch on each other. I think right now it’s just unacceptable! Guild solidarity, as my dad taught me, obliges each one of us, an employee of the theater—whether the actor, or the director—not to speak bad things in the media about each other, or institutions, on which we depend. You can, as much as necessary, disagree with some director or actor. If so, text him a vicious message, write a letter to him, wait for him next to his door, tell him. But it is not necessary to involve the media and make it available to all. Because our quarrels, which will happen, create dissent, indignation—this is normal. But when we fill it in newspapers and magazines, and television, this only helps our enemies. I mean those who want to bend to the interests of the art to that of the government. Small specific ideological interests. We, thank God, became free from this.

I remember—and we all come from the Soviet regime—this shameful idiocy! This is the reason, the only one, for which I do not want to be young again, I do not want to go back there again, to read that filthy book. And I am forced to read this book again. Because with the words of morality, the motherland and the people and patriotism—they cover normally very paltry goals. I do not trust these groups of outraged and offended people whose religious sensibilities are allegedly offended. I do not trust them! I believe that they are paid for. So this is a small group of nasty people who are fighting in illegal vile ways for morality, if you please.

Then they pour urine onto photos. Is that really the struggle for morality? Generally NGOs should not fight for morality in art. Art has enough filters such as directors, art directors, critics, and the soul of the artist. It supports morality. Do not pretend that power is the only carrier of morality and ethics. This is not true.

In general, power has so many temptations surrounding it that smart power pays for art, pays for holding a mirror in front of it and showing in the mirror the errors, mistakes, and vices of this power. Power shouldn’t pay, like our leaders say: “We will pay the money, and you do what you have to.” And who knows what we have to do? It’s them who will know what we have to do? I hear these days: “This is alien to our values. Harmful to the people.” Who decides? It is them who decide? They shouldn’t interfere at all. They should help the arts and culture.

I believe that we need to unite. I repeat: we need to be united. We need to spit and to forget about our art of fine reflexes in relation to each other. I may not like that much some other director, but I will lay my life for his right to speak out. Here, I repeat the words of Voltaire. Almost. Well, because I have such high human qualities. In fact, jokes apart, it seems to me that everyone will understand. This is normal: there will be disagreement, there will be indignation.

Once the theater professionals meet with the president (these meetings are infrequent, I would say scenic, but still they happen), it is supposed to be possible to solve some serious problems. But no. For some reason, even then, a proposal to establish a possible limit on interpretation of classics arises. Why should the President care? Well, why should he be involved. He does not have to understand all this. He does not know—and does not need to understand it. And anyway, why should we set this border? Who will be the border guard? Well, it is not necessary. Do interpret classics! Someone will be outraged—it is wonderful.

A lot of interesting things are happening in the theater world right now. And a lot of interesting performances. I think it’s good. Different, controversial, beautiful! But no, again we somehow want … We are slandering each other, are denouncing sometimes—just like that, snitching. We want to go back to the cage. Why to the cage again? “Censorship, yes please!” Do not, do not! Lord, we ourselves renounce our conquests? Why do we illustrate Fyodor Dostoevsky, who said: “Free us from custody, and we immediately ask to be taken back into it.” What’s wrong with us? Is he really such a genius, that he snitched on us for the thousand years to come? On our, so to speak, servility?

I suggest: guys, we need to speak out clearly on this issue, in connection with these closures. Why do we keep silence all the time? Closing the performances, closing this and that… Closing “Jesus Christ – Superstar.” Oh Lord! “Someone was offended.” Yes, it will offend someone, so what?

And the church, our poor, which has forgotten how it was hunted. The priests were assassinated, the crosses were plucked, and the churches were transformed to vegetable warehouses. The church begins to act the same way today. So Leo Tolstoy was right when he said that we shouldn’t connect power to the church, otherwise it stops serving God, and starts serving the power. And we are witnessing this to a large extent.

Don’t be afraid that the church will be indignant. It’s ok! But don’t close it all right away. Or, if closed, react to this. We all should react together. Here they tried to do something with Boris Milgram in Perm. Well, this time we stood up, many of us. And he was returned to the theater. Can you imagine? Our government has taken a step back. Doing something silly, it took a step back and fixed this nonsense. It’s amazing. It’s so rare and atypical. We did it. We gathered and suddenly spoke up.

It seems to me now, in this very difficult time, very dangerous, very terrible, it all looks similar to… I will not say what. But you know. We need to join forces together and very, very clearly stand up to it.

This translation was compiled from an uncorrected transcript of the speech.