Journalism in the Crosshairs 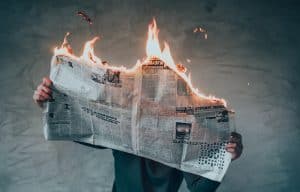 Authoritarianism does not knock politely on the door of a democracy—it barges right in, breaking doors or windows as needed for entry. Though it often develops incrementally, there are clear early warnings that it’s on its way: demonization of whole classes of people with divisive rhetoric; a leader who governs by whim, resists collaboration, and undermines due process; fiery rhetoric that engages emotions and incites fear without substantive content; a credulous citizenry that feels aggrieved by social, economic, or racial realignments; and most of all, the neutering of the press.

Why the press? Because its mission of dispassionate observation and transparency provides external “checks and balances” on abuses of executive power. It is no coincidence that President Donald Trump’s targets du jour are an independent press and judiciary. Both institutions, one inside the government, the other outside, are threatening to those who govern in the manner of monarchs, declaring by word or action “l’état, c’est moi”—or, as President Richard Nixon put it, “when the president does it, that means it is not illegal.”

History shows that democracies are by nature fragile, with ample examples of established and harmonious democracies that rapidly descended into authoritarianism. The specter of arbitrary personal rule that our nation’s founders fled in Europe and resisted in their new homeland motivated them to devise numerous strategies to guard against its recurrence here. They included five foundational guarantees in the Constitution’s First Amendment, including freedom of the press.

How disturbing then to have a president, sworn to obey the Constitution, who brashly labels the news media “the enemy of the American people.” Using fear, innuendo, insult, denial of access, and just plain lies, the president started the post-midterm period by withdrawing the press credentials of a White House reporter. CNN journalist Jim Acosta’s offense was asking a question at a news conference that apparently discomfited President Trump. The White House press office justified the arbitrary revocation of Acosta’s credentials with a fictional narrative promoted by the right-wing conspiracy site Infowars. The White House reversed its action under judicial pressure, but the president threatened continued harassment of the reporter “if he misbehaves,” which is a highly subjective standard in Trump’s self-absorbed worldview.

Intimidation—in an apparent effort to “chill” journalistic initiative—is as much of a threat as outright denial of access. The president accused a PBS reporter of asking “racist” questions at a news conference. He called another female African American reporter “a loser . . . very nasty” and told yet another that she’d asked “a stupid question. . . . You ask a lot of stupid questions.” He has labeled other reporters with belittling nicknames and, in one notorious case, theatrically mocked a reporter’s physical disabilities.

At a political rally, the president defended Montana Congressman Greg Gianforte, who had pleaded guilty to physically assaulting Guardian reporter Ben Jacobs. Gianforte apologized for his “mistake.” Trump’s response? “Any guy that can do a body slam, he’s my kind of—he’s my guy.”

From his earliest campaign rallies, like a schoolyard bully egging on a mob from the sidelines, Trump has assailed “press enemies,” calling out journalists in the press pen, by name and collectively, accusing them of being “scum” and circulating “fake news”—and worse—and then smirked at the jeers, chants, and expulsions that followed.

He has relied on official reprisals as well as rhetorical venom, limiting journalists’ access to information that the government formerly released routinely.

Even successful court challenges couldn’t reverse the damage inflicted on our democracy by this administration’s pattern of press restrictions and intimidation. The precedents being set in this birthplace of press freedom are endangering the careers—and the lives—of journalists in this country and abroad. The press and the public watched incredulously as the “leader of the Free World” reacted with nonchalance to an international horror, Saudi Arabia’s savage murder and dismemberment of Jamal Khashoggi, a journalist who had been living and publishing in this country.

The press and the public tend to drop their guard when the pressure eases temporarily, but the stakes are too high to ignore Trump’s repeated assaults on press freedom just because he doesn’t tweet about the issue for a day or two.

The ultimate target of the president’s hostile and calculated rhetoric is not the press—the watchdog and messenger of truth—but the very notion of truth itself. When there are no norms of discourse and no common acceptance of long-established and constitutionally mandated standards, a president is free to impose, with authoritarian impunity, his own reality, a make-believe world in which, as the president’s chum and lawyer Rudy Giuliani put it a few months ago, “Truth isn’t truth.” It’s a world where governing is reduced to compliance with one man’s will, as Trump signaled obliquely that he would do in his Republican nomination acceptance speech: “Only I can fix it.”

“The ultimate target of the president’s hostile and calculated rhetoric is not the press—the watchdog and messenger of truth—but the very notion of truth itself.”

Constitutional and judicial guarantees often prove inadequate when a determined, authoritarian president whips his supporters into a froth of anger at those he characterizes as “enemies.” Many journalists currently working in the news media feel constrained by ethical codes and public perception from openly challenging the president’s attacks on fundamental rights. For that reason, a large share of the burden of defending freedom of the press rests with journalism organizations and people who once worked in the news media and understand the obstacles their colleagues still face.

The American affiliate of PEN—the international conscience of the writing world—has filed suit against the president “to stop [him] from using the machinery of government to retaliate or threaten reprisals against journalists and media outlets for coverage he dislikes.” In its lawsuit, PEN America says “President Trump crosses the line” when he “threatens to use his authority to punish the media, or actually does so.”

As of this writing, more than 450 journalists, most of them retired and thus freer to speak openly, have signed a letter supporting PEN America’s lawsuit and declaring that Trump’s treatment of the press is “unconstitutional, un-American and utterly unlawful and unseemly for the President of the United States and leader of the free world.”

The Rev. Martin Niemöller is justly celebrated for summarizing the authoritarian dynamic that singles out “target” classes of citizens and takes advantage of fear and divisiveness to consolidate personal power. His words “First they came for the socialists . . .” are a moral beacon that shines from the wreckage of World War II-era Germany. They illustrate how authoritarianism develops in a series of sometimes imperceptible increments, almost unnoticed at first, but becoming more difficult to challenge at each stage. Recently, an internet meme of unknown authorship updated Rev. Niemöller’s warning and hinted at the consequences if we remain silent as the president undermines the news media:

First they came for the journalists, and I did not speak out—because I wasn’t a journalist. We have no idea what they did after that.

We have been warned. We must all be aware of the stakes. When government officials have sufficiently eroded the credibility of the press, there can be no transparency and no democracy. The process will become irreversible.

Working journalists cannot take on the full burden of opposing the president’s extraordinary attacks on them and their constitutionally sanctioned mission without appearing to be political antagonists. It is essential that other citizens forcefully defend press autonomy and, with it, our perishable system of government, so that we can tell our progeny with pride:

First they came for the journalists, and we spoke out.

Peter Y. Sussman is a retired author and journalist who spent 29 years as an editor at the San Francisco Chronicle. He has been honored by many organizations, including PEN, the Scripps Howard Foundation, and the Society of Professional Journalists, for his First Amendment advocacy.