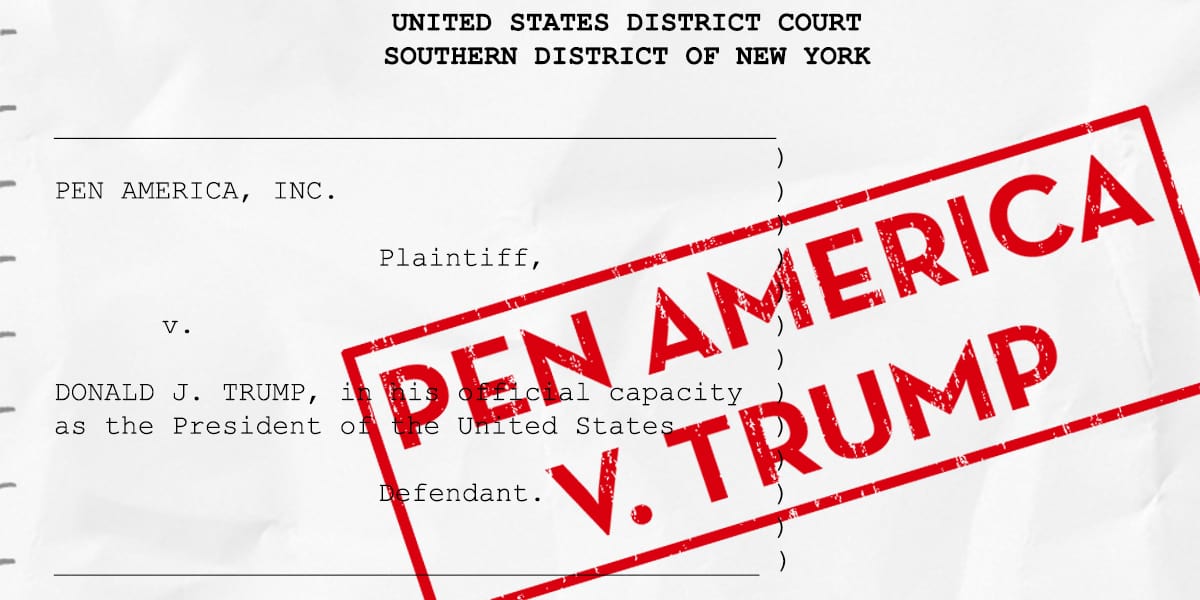 “PEN declares for a free press and opposes arbitrary censorship. It believes that the necessary advance of the world toward a more highly organized political and economic order renders free criticism of governments, administrations, and institutions imperative.”

PEN America filed its landmark First Amendment lawsuit, PEN America v. Trump, in 2018 to stop then-President Trump’s campaign of censorship against the press. After more than two years of litigation, PEN America settled the lawsuit in 2021, keeping in place a lower court ruling that set a pathbreaking precedent: that officials who use the powers of government to exact reprisals against the press can be held accountable in the courts.

Notably, the court recognized PEN America’s ability to seek redress against the most powerful political figure in the country on behalf of its 7,500 Members.

PEN America was represented in the lawsuit by nonpartisan nonprofit Protect Democracy, the Yale Law School Media Freedom of Information & Access Clinic, and Davis Wright Tremaine, and argued that under the First Amendment’s protection for freedom of speech, President Trump could not use the machinery of government to retaliate or threaten reprisals against journalists and media outlets for coverage he dislikes.

As originally laid out in the complaint, PEN America alleged at least five situations in which the president used or threatened to use the regulatory and enforcement powers of government to punish the speech of journalists, including when he:

In 2020, the U.S. District Court for the Southern District of New York granted the government’s motion to dismiss on claims related to the first four situations, finding that the plaintiffs lack standing to sue, but found that PEN America sufficiently pled its claims related to press credentials and security clearances.

PEN America settled its 2018 lawsuit with the United States government in February 2021. The settlement agreement, entered February 18, 2021 in the U.S. District Court for the Southern District of New York, preserves a critical March 2020 federal court ruling that upheld PEN America’s standing to pursue a challenge to the president’s threats and acts of retaliation against journalists and the media. The decision forms an important benchmark, providing accountability for officials who use the power of government to exact reprisals against the press.

What does this settlement mean for the case?
The settlement agreement, entered on February 18, 2021 in the U.S. District Court for the Southern District of New York, preserves a March 2020 federal court ruling that upheld PEN America’s standing to pursue a challenge to the president’s threats and acts of retaliation against journalists and the media. The decision forms an important precedent for holding accountable officials who use the power of government to exact reprisals against the press.

Can PEN America revive the lawsuit?
When a case is dismissed without prejudice, it leaves a plaintiff (such as PEN America) free to refile the lawsuit based on the same grounds set forth in the original suit, meaning PEN America could refile if the conduct were to occur in the future.

Why did PEN America bring the suit?
PEN America’s mission is to unite writers and their allies to celebrate creative expression and defend the liberties that make it possible. PEN America’s bedrock work is long-term advocacy on behalf of individual writers who are being persecuted because of their speech. PEN America also works on a range of free expression policy issues both in the United States and worldwide. PEN America filed the lawsuit to further that mission. As the American branch of PEN’s worldwide network, we have a special responsibility both to our own 7,200 Members and to the rights and freedoms that protect free expression for all in this country. We have a long history of defending against encroachments by the government on free speech, including through litigation where necessary. The president’s conduct harmed PEN America’s Members by forcing them to do their work against the backdrop of credible threats of retaliation by the president. The district court recognized this in its March 2020 ruling.

PEN America has seen the erosion of democracy in other countries when similar behavior has been left unchecked and allowed to undermine the free flow of ideas and the ability of citizens to hold governments accountable. We filed suit because we thought we have a duty to stop that from happening here.

As the United States Supreme Court said in 1936, “[S]ince informed public opinion is the most potent of all restraints upon misgovernment, the suppression or abridgement of the publicity afforded by a free press cannot be regarded otherwise than with grave concern.” The government violates the First Amendment when it takes adverse action against the press because of the content of its protected speech. As the Second Circuit Court of Appeals has said, “A public-official defendant who threatens to employ coercive state power to stifle protected speech violates a plaintiff’s First Amendment rights.”

What are some examples of threats and retaliatory action by the president that violated the First Amendment?
As originally laid out in the complaint, PEN America alleged at least five situations in which the president used or threatened to use the regulatory and enforcement powers of government to punish the speech of journalists, including when he:

In 2020, the U.S. District Court for the Southern District of New York granted the government’s motion to dismiss on claims related to the first four situations, finding that the plaintiffs lack standing to sue, but it found that PEN America sufficiently pled its claims related to press credentials and security clearances.

Was this the first time PEN America criticized a president’s treatment of the press?
No. PEN America has long defended freedom of expression against government incursions, including by filing suit. When the Obama administration sought to prosecute journalists as a means of curtailing government leakers, PEN America spoke out against it and supported legal actions to defend the First Amendment rights of journalists and writers. When the Bush administration sought to invoke the Patriot Act to block prominent writers and scholars from visiting the United States due to their critical speech, PEN America turned to the courts to enforce the First Amendment. Some examples of prior PEN America suits challenging the government include:

In addition, PEN America has filed amicus (“friend of the court”) briefs on a wide range of issues related to our mandate, from court decisions that affect freedom of the press, to cases related to Americans’ rights to free speech online, to enforcement actions that appear to unfairly target specific journalists. Our more recent amicus filings include our brief—along with more than 30 arts organizations—calling for the court to find the Trump administration’s travel ban unconstitutional. In all, PEN America has a more than 40-year history of filing such amicus briefs as part of our mandate to fight for freedom of expression.

Was what President Trump did really so different from past presidents? Hasn’t the White House always had an adversarial relationship with the press?
President Trump and his administration were not alone in taking steps to undermine the First Amendment. John Adams, Abraham Lincoln, Richard Nixon, George W. Bush, and Barack Obama all did things that were dangerous to our free press. However, the open and systemic assault we witnessed from President Trump, especially within the global context in which autocrats around the world—many of whom President Trump openly supported—have undermined a free press in similar ways, posing a level of danger that we believe is unique in recent history. Past presidents may have skirted First Amendment values or even the law itself, but they continued to affirm the importance of a free press. In contrast, President Trump called the press “the enemy of the people,” while turning the regulatory and enforcement powers of the state against the press in a deliberate attempt to silence criticism. His actions and the climate of hostility toward the press that emerged among a segment of the American public demand a robust response.

Did this suit seek to suppress the president’s speech and keep him from responding to his critics?
No, this suit was never about suppressing the president’s speech. Under the First Amendment’s protection of free speech, a sitting president can express his own views and criticize journalists and media organizations. PEN America sued President Trump because of a series of retaliatory uses of the formal powers of his office, and credible threats to do so, to punish and retaliate against speakers with whom he disagreed. Because these actions came from the most powerful official in the United States government, we felt we must defend our Members and other journalists, whose responsibility to hold the government accountable may require criticizing the president.

“Trump’s media attacks are an abuse of power. We’re holding him to account”
The Guardian, March 17, 2019

“First They Came For Acosta: Why We Sued Trump Before He Acts Again (Opinion)”
Variety, November 16, 2018

“Standing up for the First Amendment”
The Washington Post, November 13, 2018

President Trump Must Call a Decisive Halt on Attacks on the Press, Starting with His Own

What the Experts are Saying About the Case

Threatening and using the Department of Justice to disrupt a merger involving CNN’s parent company, Time Warner, with AT&T because of CNN coverage that the president found hostile.

Directing the United States Postal Service to explore raising postal rates for Amazon because its founder and CEO, Jeff Bezos, owns The Washington Post, a newspaper that the president views as critical of him.

Threatening to have the federal government revoke television broadcast licenses in response to those networks’ coverage of the president.

Directing the removal of certain White House correspondents from events covering the president and threatening to ban additional journalists from these events.