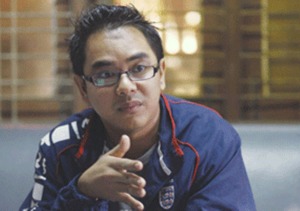 The recipient of the 2010 PEN/Barbara Goldsmith Freedom to Write Award, Nay Phone Latt served four years in a Burmese prison for “defaming the state” and tarnishing the image of the government of Myanmar. Released in January 2012, the young blogger and political dissident opened the new Myanmar PEN Centre last month with Ma Thida. Below, first published on PEN International’s website, Sarah Clarke catches up with Latt at the Internet Governance Forum (IFG) in Indonesia to talk about the impact of the political changes in Myanmar on writers, the new PEN Center, and the role of the Internet in the country.

PEN: How have the recent political changes in Myanmar impacted the lives of writers in the country?

NAY PHONE LATT: During the military regime we had very restrictive censorship, so whenever we writers wanted to publish a poem or short story in the print media, we had to overcome two major barriers—editors and censorship. For new writers it was almost impossible to find editors who would publish our work—they would only publish the work of well known, established writers. While we got around this with online publishing, we then had to deal with censorship. I wrote some short stories during the military regime and was delighted when an editor finally chose to publish them. You can imagine how disappointing it was when I was then told that the stories had been banned by the State censor.

PEN: Would the censors give a reason?

LATT: No, of course not! And you never knew when or why they’d ban writings. Sometimes the stories would come back with one or two sentences removed and other times they’d remove the whole story. So being a writer during the military regime really wasn’t a good career choice.

So now, the situation has changed a little bit. There’s no censorship and many writings of political prisoners and the new generation are now emerging. But while there’s no censorship, the literary environment is still not promising for young writers.

PEN: And why is that?

LATT: It’s mainly financial. There isn’t a strong readership in Burma and, despite a population of 60 million, the circulation of any book usually only runs to 1,000. So it’s just not profitable to write.

PEN: Is there a culture of reading in Burma?

LATT: There is, but the lifestyle doesn’t really allow for it. People work such long hours to survive and so many people are struggling to live and study, reading for pleasure is a luxury really. The education system doesn’t encourage reading either, and few young people read.

PEN: Coming back to your experiences during the regime, how did you manage to get published?

LATT: During the military regime, I went to Singapore to find a job. There, a friend introduced me to online blogging and I couldn’t believe it—no censorship, no editor—I could finally publish what I wanted freely about Burma, and I could find a community of readers. The Myanmar diaspora is huge and they were really hungry to read about the situation back at home. That’s how I gained a big following and that’s why people know me now.

PEN: And as you were in Singapore, what was happening with the internet in Myanmar?

PEN: And eventually you got into trouble for your blogging…

LATT: Yes, we all got in trouble. The regime hadn’t known about our blogs, and then the Saffron Revolution happened. Bloggers played a huge role in the lead up to the events of the revolution. Then, as the government cracked down on the protests, photos taken by protesters on their mobile phones of the brutality were uploaded to blogs and emailed to the outside world. This was a real turning point as the government realized the true communication power of the internet to show the world instantly the violence of the regime against peaceful protesters.

And that’s why they sentenced us to prison for so long under the Electronic Transactions Law. They gave me 15 years with this law out of a possible 7-15 year sentence. But that really wasn’t that big compared to the others. The regime liked to work in multiples so they gave Zarganar (the comedian and PEN member) three times as much—45 years, and 60 years to Min Ko Naing and other 88 Generation, so I suppose I wasn’t that important.(laughs)

PEN: In the end you spent 4 years in Hpa-An jail. Could you write in prison?

LATT: Well, I could write letters to family and friends every month. Writing short stories and poems was illegal, so I’d write them secretly.

PEN: And when you were released from prison, the political situation was shifting. Can you tell us about those changes?

LATT: Yeah, I was released along with many other political prisoners and we found that people had great hopes in us to do something, and I realized we needed to do something for the people. On being released I set up an Organization named MIDO (Myanmar ICT For Development Organization), which focuses on ICT4D, and I wrote in some local journals as the print media was opening up. Blogging still wasn’t that popular inside Burma, but there was Facebook and I used that to write, and I worked with MIDO.

PEN: How did you come in contact with PEN?

LATT: My first love is writing and I’ve always wanted to be a writer. So when PEN American Center awarded me their Barbara Goldsmith Award, I felt like a true writer and was so encouraged to take my writing more seriously. And as I got to know about PEN, I knew I wanted to be involved with creating a Myanmar PEN.

For so long we’ve been looking inward at Myanmar and I think it’s time to start looking out. And because Myanmar PEN would be part of PEN International, I thought it was right to be part of this, as Myanmar also needs to look to the world and see how it can help other peoples who are going through what we went through. I want to create a culture of international support in Myanmar. At the moment, many people in Myanmar are still just concerned with surviving and don’t think outside of themselves and their interests. But this is the globalized age and we need to think more about ourselves as “we are the world,” rather than “we are Myanmar” or as “we are China,” and I think PEN is a place to do this.

PEN: How do you envisage the future for freedom of expression in Myanmar?

LATT: Well, I have some worries for the future of our country. But of course worrying isn’t enough. Many people are taking a “wait and see” approach, but I don’t agree with that mentality. Our future is in our hands. It will be what we fight for it to be. Just worrying isn’t profitable.

PEN: What about the role of the internet? We’ve heard a lot here at the IGF and in the news recently of how freedom of expression online is under threat. Do you think that’s true for Myanmar?

LATT: Compared with the military regime, the internet is now so much more free than before. We can use Gmail, Facebook, and blogs, and Whattsapp (the free online texting service) is used to communicate all over Burma. There are so many websites people in Myanmar can now access about democracy in the country. So we can say that we are free.

But the problem is that we are not safe. The existing law just amends the duration of punishment of the Electronic Transition Act, reducing the prison sentence from 7-15 to 5-7 years. This isn’t enough, but we need to amend this and those laws which threaten expression in the internet society.

PEN: And is internet penetration high in Burma?

LATT: No, it’s just 7 per cent at the moment, but in a year or two it will have increased rapidly. The Telecom contracts have now been awarded to Telenor and Uredoo, and within 1-2 years the mobile phone and internet penetration rate will rise.

PEN: Turning for a moment to the issue of linguistic rights, I wanted to ask you about the situation of minority languages in Myanmar.

LATT: Yes, this is a problem. In the Constitution of Myanmar, Burmese is the only official language. But like you say, there are many minority languages, and some of the ethnic groups want to protect their own language by giving it legal protection, but according to the Constitution, only Burmese is official. And I think this is going to continue to cause tensions. If you look at India, they seem to have accommodated this issue buy having three official languages in each state—one is an Indian language, one is English, and one is an ethnic language. If this were to happen in the Karen State for example, you would have Burmese, English, and Karen as the official languages.

PEN: And what’s next for Myanmar PEN?

LATT: On the 27th of November we’ll hold a general assembly to elect the board and committee members, and then after that we have three plans. Many of the young writers are interested in joining PEN Myanmar and they’re looking to dedicate time and effort to building a strong centre. Most of our famous writers are looking to be honorary members.