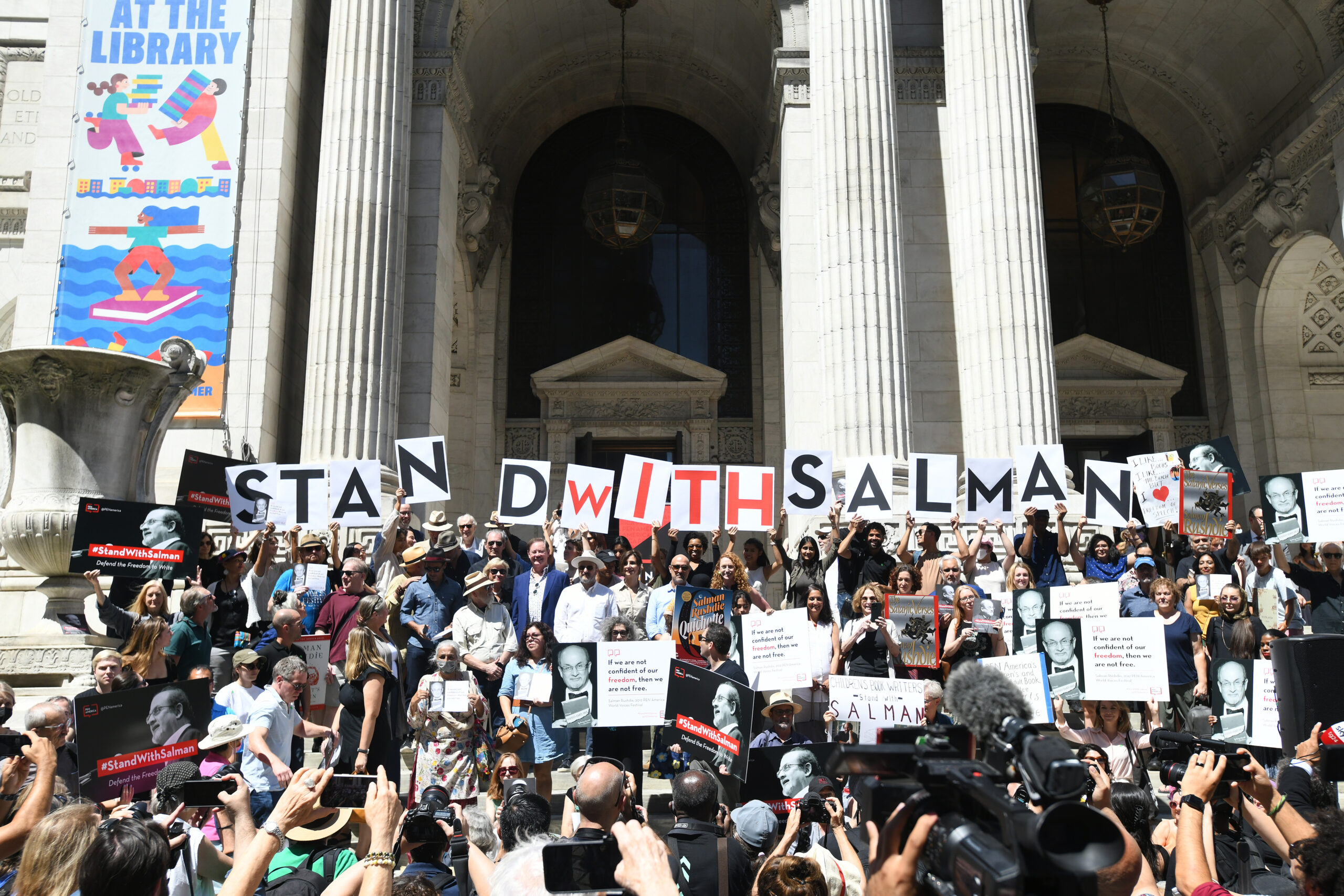 (NEW YORK)– The event came together at lightning speed. A week ago almost to the hour that Salman Rushdie had been grievously stabbed — viewed worldwide as an attack on free expression and free speech itself— PEN America united more than a dozen of his fellow writers, including his close friends, to read from his novels, essays, and speeches in a place that resonates with the meaning of his life as a writer: the New York Public Library.

Readers who admire his books, along with New Yorkers horrified by the attack and determined to stand in solidarity, showed up by the hundreds Friday morning on the library’s plaza steps in midtown Manhattan. They heard Rushdie’s incomparable words along with an outpouring of admiration, concern, and love. Online a global audience watched via livestream, and shared messages of support on social platforms. Joining PEN America as hosts were Rushdie’s publisher, Penguin Random House, the House of SpeakEasy, and the New York Public Library, whose stately Beaux Arts building on Fifth Avenue and 42nd Street framed the outdoor readings under a blazing sun. Rushdie had given several talks at the library focused on free expression and free speech over the years.

Suzanne Nossel, PEN America’s CEO, captured the meaning of the attack as she opened the event:

“When a would-be murderer plunged a knife into Salman Rushdie’s neck he pierced more than just the flesh of a renowned writer.  He sliced through time, jolting all of us to recognize that horrors of the past were hauntingly present. He infiltrated across borders, enabling the long arm of a vengeful government to reach into a peaceful haven.  He punctured our calm, leaving us lying awake at night contemplating the sheer terror of those moments on stage at Chautauqua.  And he shattered our comfort, forcing us to contemplate the frailty of our own freedom.”

Ayatollah Ruholla Khomeni issued a fatwa in 1989, marking Rushdie for death over a fictional dream sequence involving the Prophet Muhammed that were considered blasphemous to some Muslims.  Years later, Khomeni’s son told an American journalist that his father never read The Satanic Verses. The fatwa forced Rushdie into hiding for a decade. He emerged nearly 20 years ago and took up residence in New York, where his intellectual brilliance and wit made him a treasured figure in literary circles and at cultural gatherings.

Called by playwright Ayad Akhtar, PEN America’s current president, one of the greatest champions of free expression over the last half century, Rushdie is the author of Midnight’s Children, The Moor’s Last Sigh, and the memoir Joseph Anton about his years in seclusion. He served as PEN America’s president from 2004-2006 and founded the World Voices Festival in 2005 to ensure that in the wake of Sept. 11 authors would continue to cross borders to learn from one another and help U.S. readers gain a global perspective on books and ideas.

Andrew Solomon, a former PEN America president, told the audience:  “It is not a coincidence that this happened now. We are living at a time when the right of free speech has been under constant assault from both the left and the right, when there have been closures of libraries, books removed from schools, when everything that used to be tokens of America’s freedom of speech is under threat.”

The violence that had targeted Rushdie and its disturbing effect on the meaning of freedom was a theme audience members voiced during Friday’s event at the library. 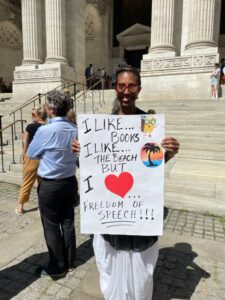 Keli Goff, a journalist and screenwriter, showed up Friday presenting a homemade sign that read: “I Like Books, I Like the Beach, But I Love Freedom of Speech.”

“I had to be here today,” she said. “Not only because this was a horrific attack and I wanted to show solidarity. But because freedom of expression means everything to me as a writer and an artist. You know, my parents grew up in the segregated South and that experience strengthened their belief that all of our voices must be heard. I grew up with that point of view. It’s the essence of who we are and it’s so important. That’s why I’m here.”

David Meth, a novelist and playwright, said he came to the city Friday morning by train from Westport, Ct. because he felt it was important to support PEN America, the First  Amendment, and Rushdie.

He poignantly recalled his time serving in the early 1970s as a Peace Corps volunteer in Korea where the autocratic leader Park Chung-hee shut down the university where Meth taught because there had been student dissent. Meth volunteered to hold classes in a cafe but his 15 students were too afraid to show up. “If we don’t have the First Amendment, the freedom to write, and freedom of expression we have nothing in this country.”

As much as the freedoms to write, read and speak galvanized the crowd in New York and on Twitter, so, too, did the readers’ fervent hope for Rushdie’s physical recovery.

The #StandWithSalmon hashtag on Twitter elicited posts of videos of writers globally reading Rushdie including Financial Times columnist Gillian Tett, who with two other writers, read from Secret Kingdoms from the Hamptons on Long Island;  the French philosopher Bernard-Henri Levy, and Jodie Ginsberg, president of the Committee to Protect Journalists.  Rushdie’s son Zafar tweeted his support. 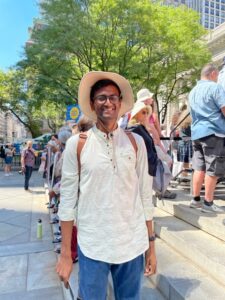 A young man in the audience, Vivek Gidla, who had moved to New York City for a new job a year ago, said he showed up Friday simply as a devoted reader of Rushdie’s books. “He turned me on to novels, where before I didn’t think fiction was all that necessary to me. I liked non-fiction more.” After reading Midnight’s Children, Satanic Verses, and a few other novels by Rushdie, Gidla said he immediately grasped that novels and fiction “are just another way of arriving at the truth. I’m actually quite grateful to him and moved to be here.”.

Several readers said they were hopeful that Rushdie would be watching the livestream from his hospital bed and seeing the outpouring of support would buoy his spirits..

“Salman I hope you can feel the love here today,” said Aasif Mandvi, the British-American actor (HBO’s the Brink) and author. His reading of Rushdie’s forthcoming novel Victory City was seen as a forward-looking moment.

Novelist Anita Desai, who lives in India, also prefaced her reading with a direct message: “Dear Salman, I hope you know you can count on us. We are here for you.”

Colum McCann, the Irish novelist, drew applause when he noted the worldwide response to the 2015 terror attack on the French satirical magazine Charlie Hebdo that took the lives of 12 of its staff because they had published cartoons depicting the Prophet Mohammed that offended some Muslims. “Then it was ‘Je suis Charlie.’ Today, I say ‘Nous sommes Salmon.’” He read from Rushdie’s 1992 essay  “Out of Kansas,” about “The Wizard of Oz.”

Later in the day, Nossel told the PEN America staff she had received a message that Rushdie and his family were “tremendously moved” by the event.

Watch the recording of the event.

View a CNN International interview with Suzanne Nossel and author Hari Kunzru after the readings.

Listen to The Bulwark Goes to Hollywood podcast with PEN America’s Summer Lopez on Rushdie and free expression: