Four Questions for Simon Armitage, Winner of the PEN Award for Poetry in Translation 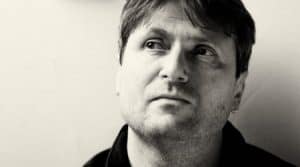 Simon Armitage is the 2017 recipient of the PEN Translation Prize, awarded for a book-length translation from any language into English published in 2016. Pearl : A New Verse Translation by The Pearl Poet is translated from Middle English and was published by Liveright/ W. W. Norton & Company.

PEN America: What brought you to this book?

Simon Armitage: I’d made a translation of Sir Gawain and the Green Knight several years earlier—thought to be by the same anonymous author—so Pearl felt like an inevitability at some stage, though it’s a very different poem, both in its subject and style. Also, after Sir Gawain, I’d become familiar with Middle English to the extent that it felt like a second language, one I didn’t want to drop or forget. For the first time in my life I was bilingual, even if I could only communicate with people who had been dead for half a millennium.

PEN America: How long did it take you to complete the translation, and what was the most challenging aspect of it?

Armitage: Probably about two years.  And the most difficult aspect was deciding how to tackle the structure, since the original has a highly wrought rhyme scheme throughout.  I had a few false starts, but once I’d taken the executive decision to use a very loose system of rhymes and half-rhymes rather than let full end-rhymes dictate the syntax, the lines started to flow more easily.

PEN America: Did you work any differently on this translation than you have on those in the past?

Armitage: The old adage “It never gets any easier, just quicker” seemed to hold true, but essentially the method was the same: crunching through glosses and dictionaries, including online resources, then making a rough literal of each verse (of which there are a hundred and one, each twelve lines long), then making a rough poeticized version, then polishing and fashioning.

PEN America: Is there anything you would like readers to know about translation that you’ve never said before?

Armitage: It will be my last translation from that period.  It’s a poem of bereavement and consolation—it felt like the right place to stop.

More from the 2017 Literary Award Winners