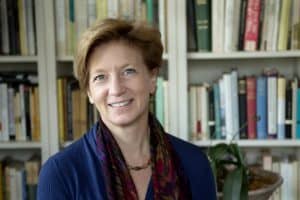 Tess Lewis is the 2017 recipient of the PEN Translation Prize, awarded for a book-length translation from any language into English published in 2016. Angel of Oblivion, by Maja Haderlap, is translated from the German and published by Archipelago Books.

PEN America: What brought you to this book?

Tess Lewis: Not long after Angel of Oblivion was published in German, an Austrian friend recommended it to me so enthusiastically that I put everything on hold and read it right away. I was captivated by the lyricism of the narrator’s voice, the energy of the book’s political engagement, and the way Maja Haderlap interweaves several layers of history into the characters’ daily lives and captures the vulnerability and confusion of adolescence.  When I was invited in 2014 to curate Festival Neue Literatur, an annual celebration of German language literature in New York City, I immediately wrote Maja and asked her to participate. The festival was a wonderful opportunity for me to talk at length with her about all of her writing—prose and poetry. I’ll be translating a collection of her poems for Archipelago Books next.

PEN America: How long did it take you to complete the translation, and what was the most challenging aspect of it?

Lewis: It took me the better part of a year, though I was also working on other projects at the same time. The biggest challenge was rendering the many voices that shape the narrative and keeping them distinct. Although the novel is told in the first person, the narrator sometimes shifts within a single sentence between her own memories and those of others, between direct and reported speech, and back again. German can indicate this switch with different verbal moods, but there’s no equivalent in English. Putting in markers like “Grandmother said” or “Mother said,” etc. weakens the reader’s sense of the extent to which the narrator’s sense identity is inextricably bound up in the often traumatic experiences of her family and community during and after the second world war. I tried to recreate the narrative’s psychological texture without erring either toward too much clarity or too little.

Lewis: I always read my drafts out loud when I’m polishing them—I find it easier to hear mistakes or awkward passages than to “see” them. The shifts in tone and voice in this book are so subtle, I found that I had to read my translation aloud more often than usual to come up with a version I was happy with.

PEN America: Is there anything you would like readers to know about translation that you’ve never said before?

Lewis: I did not expect translating to get harder, not easier, with the number of books I’ve done. I get that sinking feeling of “How am I ever going to do this?” more often now than I used to. It’s not that the books I’m working on at the moment are more difficult than those I translated earlier—instead I think I’ve become more attuned to the subtleties of style and cultural context, more conscious of everything that can and will get lost. The discipline (obsessiveness?) of translating definitely makes you a better reader.

More from the 2017 Literary Award Winners

Four Questions for Simon Armitage, Winner of the PEN Award for Poetry in Translation