Works of Justice—BREAK OUT: A Movement

This September, in commemoration of the Attica Riots, PEN America and The Poetry Project launched BREAK OUT: a movement to (re)integrate incarcerated writers into literary community. Throughout the month, over two dozen local reading series in New York City—and across the country—featured the work of a currently incarcerated writer.

In the past year, our work in the PEN America Prison and Justice Writing Program has moved with intention toward reintegrating exiled voices into our broader literary worlds. We operate with the knowledge that for writers in prison, access to participation in the literary community is severely limited by not only stigma and physical restriction, but financial barriers, lack of technology, and censorship. Our work this past year has addressed the issues of mail room censorship, the challenges of creative life in prison, and the intensive commitment it takes for a publisher to bring powerful voices out from behind the walls. 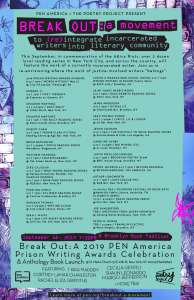 As literary advocates grappling with the ethics of writing in an era of mass incarceration, we often unintentionally replicate the suppression and isolation of the very system we seek to challenge. Some of the questions we are surfacing: How do we begin to un-silo the writer in prison from the flattening “prison writer” label? How can we bring voices from behind the walls into authentic relationships with our existing communities? We began to dream of an engagement that disrupted the idea that writers in prison are any less capable, talented, or worthy of belonging in the larger literary—without the special assignment.

Since 1966, The Poetry Project has expanded access to literature, education, and opportunities for sharing one’s creative work in a counter-hierarchical, radically open space and community. Premised on the vision that cultural action at the local level can inspire broader shifts in public consciousness, The Project is committed to developing and collaborating on replicable program models that challenge persistent social narratives, especially through the verbal reframing made possible in poetry.

Bringing these two missions together—leaning on PEN America’s over four decades of expertise in the justice arena, and The Poetry Project’s deep history of community building—we invited local literary leaders to join us in re-envisioning where the work of incarcerated writers “belongs.”

We were astonished by the response. During the month of September, over two dozen events in New York City, and across the nation, invited a stand-in reader to stage the work of a currently incarcerated writer, curated by PEN America’s team. A few venues had the luck of playing an actual recording of the writer reading their own work—a rare offering, considering that most prisons are technological deserts.

Our hope is for our event series to be merely a conversation starter, and our goal is to extend the effort far beyond September’s bounds. Participating reading series curators joined a community conversation about the framing, ethics, and presentation of the work, and were called on to help create a future vision of radical literary inclusion. A handful of the featured writers offered their guidance, which can be read in the Literary Hub article, What Incarcerated Writers Want Literary Community to Understand.

Without the capacity to attend the events, nor, in most cases, watch video or listen to audio, we sent the featured writers a package with photos, audience feedback, and promotional materials from each event to help share the impact of their work on stage.

Featured writers and participating BREAK OUT venues include:

EXPERIENCE MEDIA FROM THE EVENT HERE

Listen to the best of past BREAK OUT events:

We invite you to follow our audio channels on: Apple Podcasts, Spotify, or Google Play.

Works of Justice: Author and Advocate Andrea J. Ritchie on State Violence Against Women of Color

Works of Justice: An Interview with Writing for Justice Fellow Justin Rovillos Monson

Works of Justice: An Interview with Writing for Justice Fellow Thomas Bartlett Whitaker