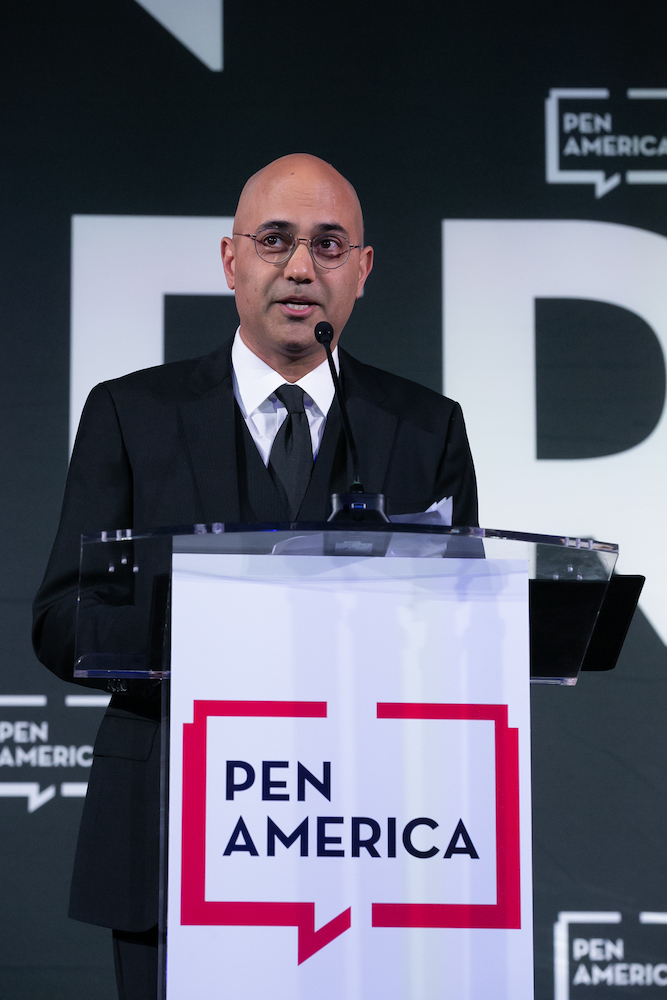 Thank you, Awkwafina. As our host just mentioned, I’m Ayad Akhtar, president of PEN America. On behalf of PEN, I want to officially welcome you all to our gala celebration. For 18 months, we have all gone about our work and personal lives on Zoom screens, so it’s a particular thrill to be together in person.

Part of the place we, as writers, have in the larger order of things is to help make sense of collective adversity—trauma, if you will. The great literature of the pandemic has yet to be published, maybe even yet to be written, but the trauma of this last 18 months is still very much with us. In convening tonight in person as writers, as lovers of literature, as supporters of freedom in so many senses, we hope to be playing a part in helping to move forward. Reading, of course, is an individual act, but a culture that fosters reading and that supports writers, compels us to presence, to protest, to celebration, to support of one another. The gradual reopening of our offices at PEN America, our commitment to holding public events—with the precautions necessary—this is part of what we feel we can and must do. We’re grateful you’re here, joining us to honor some truly extraordinary people tonight, and to support the freedom that has been an essential strand of PEN America since it was founded almost a hundred years ago.

Tonight, on the occasion of this, our yearly gala celebration, I’d like to offer a few words on freedom—and not just freedom of expression, but of thought itself. I was informed this morning, by an email newsletter, that it is Vaclav Havel’s birthday today. A fellow playwright, a dissident—and the eventual president of the Czech Republic—was born 85 years ago today. I was thinking this morning about his legacy and its ongoing relevance, and I remembered an essay of his, “The Power of the Powerless,” in which he outlines how ideology shapes social relations through a maze of influence and fear—deforming reality, forcing the individual to “live the lie of the regime.”

Obviously, we’re living through very different political and historical times. But it would be hard not to see the threat of the lies we, too, are being forced to contend with in the present day. And I’m not just talking here about the so-called “Big Lie” casting its noxious shadow on our national political life. No. I’m also referring to the deformation of reality that our manifold outrages are unleashing upon us from all quarters. Like characters in Václav Havel plays, we are increasingly beset by ideologies—some passionate, some canny—all seeking to substitute intensity for thinking itself. It turns out that the labyrinth of influence and fear is still very much with us.

Havel’s remedy for the treacheries of collective unreality was to “live in the truth of daily life”—a practice that differentiated one from the group think, from the mandated culture and its sanctioned points of view. What Havel is describing as a remedy is, in a nutshell, the substance of the writer’s life—daily exercise of “living in the truth” on the page. The practice—this practice—is the fundamental basis of the writer’s value to us all, and it’s predicated on freedom: the freedom for a writer to make sense of reality by her own lights, to make sense freely of what she sees, what she comes to understand, and to think and speak, to write, emboldened by that freedom. Which isn’t, of course, to suggest there won’t be consequences to be borne by the exercise of such freedom. There are always consequences. Which is why we’re here.

To support and protect those who think—and speak freely, and who, by doing so, encourage the rest of us to follow suit.

It’s a message and a mission as important now, as it’s ever been.

Thank you, and let the festivities begin.