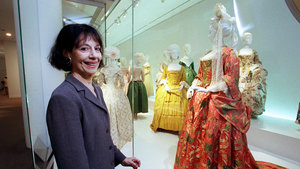 Described by the poet and her lifelong friend Richard Howard as “shamefully literary,” Hollander is celebrated for revolutionizing how we study and write about fashion and clothing.

An art historian, Hollander began writing prolifically in the 1970s, publishing numerous essays and reviews, in addition to organizing museum exhibitions. Hollander’s books “Seeing Through Clothes” (1978) and “Sex and Suits” (1994) are recognized for their unprecedented studies of the evolution of fashion.

An active PEN member, in 1995, “Anne accepted the PEN Presidency with a modesty that camouflaged her exceptionally sophisticated and diplomatic leadership skills,” recalled Sidney Offit, a PEN Trustee who served on the Nominating Committee during Hollander’s term.

As president, Hollander was challenged with insufficient funding and an oversized executive board that reached 95 members. “We can’t get our high-minded projects into being without an efficient means of raising money,” Hollander said in a 1996 interview.

As a scholar, Hollander is known for her role in bridging art, fashion, history, and literary nonfiction. Today, we remember her not only as a writer, but also as a leader in the literary community for her invaluable work with PEN.