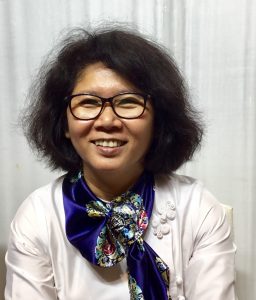 Ma Thida is a Burmese human rights activist, surgeon, writer, and former prisoner of conscience. In October of 1994, she was arrested and sentenced to 20 years in Insein Prison on the charges of “endangering public peace, having contact with illegal organizations, and distributing unlawful literature.” In 1996 she was the recipient of that year’s PEN/Barbara Goldsmith Freedom to Write Award, but she was not released until 1999, after serving six years in harsh conditions. She was released on humanitarian grounds due in part to her declining health, international pressure, and advocacy on the part of human rights organizations like Amnesty International and the PEN network.

Ma Thida studied medicine in the early 1980s, becoming a trained physician and later volunteering as general practitioner at a charity clinic. She gained a reputation as a progressive writer at a young age. “I wanted to become a writer because I want to share what I observe around me, like poverty,” she stated. Her books deal with the political situation in Myanmar and thus, she is considered a leading intellectual in the country but was also perceived as a threat by the then military government. Thida was involved in Aung San Suu Kyi’s campaign as an assistant during the 1990 general election. Her involvement in the campaign led to her first book, The Sunflower, which was banned in the early 1990s in Myanmar. The Sunflower addressed how people’s expectations of Suu Kyi turned Suu Kyi into a “prisoner of applause” because of how much she was shouldering the burdens of so many people. Thida suggested that “people should cooperate and do what they can for their country by themselves.” She has published nine books in both Burmese and English.

The political nature of Thida’s writing made her a target for the oppressive regime in Myanmar, and she was sentenced to 20 years in Insein Prison in 1993 for “endangering public peace, having contact with illegal organizations, and distributing unlawful literature.” She was denied medical care for various health ailments during the six years of her prison sentence that she served in terrible, inhumane conditions. During her time in prison, she turned to the Buddhist meditation technique of Vipassana. This contributed to her desire not to hold a grudge against the regime for sentencing her to time in prison. She feels her experiences in prison helped her writing gain recognition. Ma Thida founded and served until 2016 as president of PEN Myanmar, whose mission includes monitoring issues related to freedom of expression, organizing discussions about literature with the public, developing a culture of literature in Myanmar, promoting creative writing, and making literature a part of the country’s educational curriculum.

Unfinished Freedom: A Blueprint for the Future of Free Expression in Myanmar

A Day in Dala with PEN Myanmar