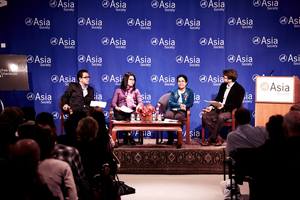 Burmese writers Dr. Ma Thida, Nay Phone Latt, and Khin Mya Zin —delegates of the new PEN Myanmar—traveled to the U.S this week to talk to American audiences and policymakers about the U.S. role in advancing free expression and human rights in Myanmar.

Recent violations of press freedoms in Myanmar—including arrests of journalists, shuttering of newspapers, and new media control laws—have alarmed the writing community there. The recent death in military custody of freelancer Aung Kyaw Naing, aka Par Gyi, made news last month, marking the first murder of a journalist in Myanmar since 2007.

In an event Monday night at New America NYC, Nay Phone Latt, a blogger who was imprisoned for 4 years under the military dictatorship, said that despite the lifting of the censorship board, there is still an “untouchable zone” for journalists, precluding reporting on the military and government cronyism.

“People are hungry to have and disseminate information after 50 years of dictatorship,” explained Ma Thida, who also served time in prison for her writing. “They are longing for freedom.”

An expert on digital freedoms and hate speech, Nay Phone Latt explained that much media found online in Burma, with an internet penetration rate of only 7%, is printed and hand-distributed. Unfortunately, the intentional distortion of facts, altering of photos, and editing of videos is a common tactic to stoke violence in the ethnically and religiously divided nation. “They misuse their newfound freedom of expression,” says Nay Phone Latt. “They think freedom of expression means freedom to insult each other. Social media has been very helpful, but people have tried to distort it by spreading hate speech and fake news. We need not only the technology, but the education to use it.”

“Our freedom is malfunctioning,” added Ma Thida. “Our media infrastructure and media literacy is weak.” The new media laws are confusing, she explained, overriding but leaving in tact outdated press laws, leaving many writers and journalists in limbo. “And the 50 years of censorship changed the way writers think, so self censorship is still present.”

Still, hope is not lost for Myanmar, but the job of reform is far from over. “The goal for writers and journalists should be national reconciliation,” said Thida. “We must take the lead now to show what kind off speech toward each other will aid the peace process.”

The delegation now travels to Washington DC, where they will meet with Hill staff and top Whitehouse advisors ahead of President Obama’s trip to Myanmar later this month.