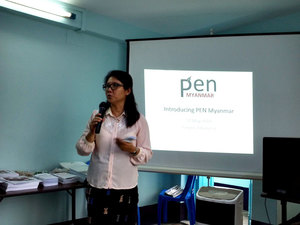 PEN Myanmar celebrated the opening of its new office on Friday in Yangon, capping off a multiyear struggle to establish a functioning center.

President Ma Thida explained that it had been “a dream” for her to open a PEN office in the country since she had served over five years in prison and PEN American Center had campaigned on her behalf. She and the invited guests were moved to tears as they recalled her fight for free expression. The ambassadors from India and Canada attended the ceremony, as well as members of the British Council and staff from international NGOs. Another opening ceremony, packed to capacity, was held in Burmese earlier in the day for local media and NGOs.

The new center has already embarked on a wide array of activities to support literature and free expression. One of the most exciting is a media-monitoring project to observe the prevalence of hate speech—typically against Muslims and minorities—and to track discussions of armed conflicts in the media. To promote tolerance, the Center will hold a Peace Awards literary contest for fiction and poetry. The center is also already a leader on digital freedom issues because of the close involvement and leadership of board member Nay Phone Latt, who simultaneously serves as the executive director of Myanmar ICT for Develop Organization (MIDO), a leading tech non-profit.

PEN Myanmar members have held eight literary workshops around the country for emerging writers. I had the privilege of attending one workshop on Saturday in the town of Twantay, about an hour outside the commercial capital of Yangon. After a white-knuckled taxi ride, we stopped into a monastery within sight of a towering golden pagoda. The writers greeted Yaywada, the presiding monk, and then held a workshop with 30 young writers from the community. Importantly, 14 of the writers were women, and all were encouraged to participate in the discussion.

The PEN Myanmar office is painted in bright turquoise and features a large central room that seats 50 people, two adjoining rooms that will serve as an office and computer center, and a kitchen in the rear. The board eschewed a fancier street address in order to keep costs low and seek sustainability—on the bottom floor is a bustling local tea shop, an appropriate storefront given that subversive literature in the country was often discussed in tea shops under military rule.

The opening of the office capped off an important week for literature in Yangon. On Wednesday, several PEN Myanmar members attended the ninth Shwe Amyutay literary awards for writers, poets, and novelists. Earlier iterations of the awards were marred by the presence of the national censorship board, who used to preside over the events, but with the disbanding of the board in 2011 the awards gained more popularity. The flashy ceremony was something of a cross between the television show Survivor and the Oscars, but this only heightened peoples’ spirits as writers joined together to celebrate their literary achievement. Author Phan Yeip Phyu, pictured, took home the prize for best short story, an extremely competitive award given the difficulty of publishing long-form fiction.

PEN Myanmar stands at the center of this vibrant literary culture and has courageously taken a stand to promote free expression and defend their colleagues—one journalist, Thura Thet Tin, is serving a year-long prison sentence on the charge of trespassing for trying to report on a public school. Four others from the journal Unity are on trial for allegedly violating the Official Secrets Act, which restricts the publication of government information. There is much work to be done, but PEN Myanmar has already proven itself a beacon for free expression.