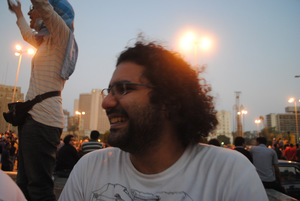 Alaa Abd El Fattah is an Egyptian activist, software developer, and blogger. His activism and use of technology made him a key voice during the Arab Spring, during which he began to develop Arabic-language versions of important software and platforms. In November 2013, he was arrested on a charge of allegedly organizing a political protest without a permit. He was released on bail on March 23, 2014, and then was sentenced to 15 years in jail in absentia in June 2014, but was able to appeal. In February 2015, as a result of the appeals process, he received a reduced five year sentence which he served until March 2019. However, on September 29, 2019, Abd El Fattah was re-arrested and detained by authorities amid the widespread crackdown on protests that erupted in late September.

Abd El Fattah was born in Cairo and grew up in a family of activists. His father was a human rights attorney, his mother is a professor and political activist, and both of his sisters, Mona Seif and Sanaa Seif, have raised awareness for civilian detainees, co-founded an independent newspaper during the Arab Spring, respectively, and faced persecution and jail time. Abd El Fattah along with his wife, Manal Hassan, created the online blog aggregators Manalaa and Omraneya — the first Arab blog aggregators to not exclude writing based on its content.

Abd El Fattah has been detained under every Egyptian head of state during his lifetime. Abd El Fattah was first arrested on May 7, 2006 during a peaceful protest. He spent 45 days in jail before being released on June 20, 2006.

In 2011, Abd El Fattah took part in the Tahrir Square protests and continued attending public demonstrations until October of that year, when he was arrested again, this time on charges of inciting violence. On December 13, the court dropped two of the charges against him, including incitement and illegal assembly. However, he was detained for another 15 days on the remaining charges of stealing weapons and shooting at soldiers. Finally, by December 25, 2011, a judge representing the public prosecutor’s office ordered the release of Abd El Fattah to take place the following day.

In November 2013, 20 policemen raided Abd El Fattah’s home to arrest him again on the charge of organizing a protest without permit under Egypt’s Protest Law. The police seized the family’s computers and phones, and when Abd El Fattah asked to see the arrest warrant, the police physically assaulted him and his wife. Abd El Fattah was arrested and detained for 115 days without trial until he was released on bail in March 2014. In June 2014, Abd El Fattah was convicted in absentia, after being prohibited from entering the courthouse, of violating Egypt’s Protest Law and sentenced to fifteen years in prison. Abd El Fattah was granted a retrial following an appeal, and on February 23, 2015, his sentence was reduced to five years in prison.

On March 29, 2019, Abd El Fattah was released from prison after serving five years. However, he remained subject to a five-year parole period, in which he was required to stay overnight at a police station for 12 hours daily. On September 29, 2019, Abd El Fattah was re-arrested by the Egyptian authorities amidst a crackdown on the 2019 protests happening in Egypt, despite being on his five-year probation and not personally taking part in the demonstrations, according to his family.

On April 16, 2020, Abdel Fattah went on a hunger strike to protest the ban on family visits to Tora prison, where he is currently being held, in the midst of the Covid-19 pandemic. His family has not seen him for over three months, and on June 23, 2020 his sister Sanaa Seif, also an activist, was harassed and abducted after protesting outside of the prison. Her family says she is being held and questioned by state security forces.

Egypt’s Harassment of writers chills freedom of speech and movement

We at Kundiman believe that Pride should extend beyond a single month and want to offer this curated list of 20 Books by Queer Asian American Writers to highlight queer writing throughout the year! 🌈 Click the link below for the list:

The Russian artistic community has voiced criticism about the politically- motivated criminal proceedings against historian Yury Dmitriev, with the prosecutor requesting a 15-year sentence. Listen to the Russian actor Konstantin Raikin's statement: https://youtu.be/Gq55ycsHnGg.

Poland's down-to-the-wire presidential election is turning into a media bloodbath, with accusations of foreign interference and press bias as the campaign enters the final stretch before Sunday's runoff vote. https://politi.co/3gUhzO3