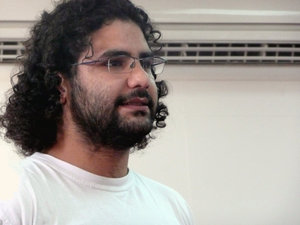 Egypt’s military authorities must release prominent blogger and political activist Alaa Abd El Fattah immediately and unconditionally, PEN International said on February 23 after he was handed down a five-year prison sentence in a retrial. He was convicted of contravening a repressive law which restricts peaceful demonstrations.

“The harsh sentence handed to Alaa Abd El Fattah demonstrates that the Egyptian authorities will continue to crackdown on dissident voices by enforcing this outrageous law that effectively prohibits legitimate peaceful public assembly. Protesting peacefully is not a crime. We call on the Egyptian authorities to repeal or amend this law to ensure that everyone in Egypt is able to exercise their fundamental right to protest,” said Ann Harrison, Program Director of PEN International’s Writers in Prison Committee.

According to Abd El Fattah’s aunt, renowned Egyptian novelist Ahdaf Soueif, he has begun a partial hunger strike in prison in protest at his treatment, drinking only juice and other fluids.

Abd El Fattah, a blogger, software engineer and advocate for freedom of expression, became one of the first Egyptian netizens facilitating a movement for political change. Following the January 25, 2011 uprising which led to the overthrow of former President Hosni Mubarak, he started a nation-wide people’s initiative enabling citizen collaboration in the drafting of the Egyptian Constitution.

Following the passage of the controversial November 2013 law banning peaceful protest without government permission, dozens of activists and political organizers have been sent to prison, including Alaa Abd El Fattah.

The latest verdict came at the re-trial of the activist who had previously received a 15-year prison sentence for involvement in an unsanctioned protest. He served 115 days in prison before being released on bail last year.  He was rearrested at the start of his retrial in October 2014.

Co-defendant Ahmed Abdel Rahman was also sentenced to five years’ imprisonment, while 19 others received prison terms of three years. All defendants are expected to appeal against the conviction and sentence.

PEN International calls for the immediate and unconditional release of Alaa Abd El Fattah, and any others held solely for the peaceful exercise of their right to freedom of expression and assembly, in accordance with Egypt’s obligations under the International Covenant on Civil and Political Rights, to which it is a state party.