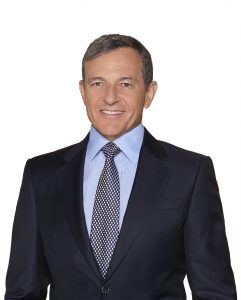 Over his 15 years leading the Company, Mr. Iger built Disney into one of the world’s largest and most admired media and entertainment companies, while focusing on the three fundamental pillars of his strategic vision: generating the best creative content possible; fostering innovation and utilizing the latest technology; and expanding into new markets around the world.

As CEO, Mr. Iger expanded on Disney’s rich history of unforgettable storytelling with the acquisitions of Pixar (2006), Marvel (2009), Lucasfilm (2012), and 21st Century Fox (2019), as well as the landmark 2016 opening of Disney’s first theme park and resort in Mainland China, Shanghai Disney Resort; and the release of a number of record-setting films including the No. 1 movie of all time, Marvel’s Avengers: Endgame, the top animated features of all time, Disney’s Frozen and Frozen 2, and the groundbreaking movie Marvel’s Black Panther. Always one to embrace new technology, Mr. Iger has made Disney an industry leader through its creative content offerings across multiple platforms, most recently leveraging cutting edge direct-to-consumer technology with the highly successful launch of the Disney+ streaming service in November 2019 and ESPN+ in 2018.

Mr. Iger assumed the role of Chief Executive Officer of The Walt Disney Company in October, 2005, and was elected Chairman in 2012. From 2000-2005 he served as President and Chief Operating Officer. Mr. Iger officially joined the Disney senior management team in 1996 as Chairman of the Disney-owned ABC Group and in 1999 was given the additional responsibility of President, Walt Disney International. In that role, Mr. Iger expanded and coordinated Disney’s presence outside of the United States, establishing the blueprint for the Company’s international growth today. As Chairman of the ABC Group, Mr. Iger oversaw the broadcast television network and station group, cable television properties, and radio and publishing businesses and also guided the complex merger between Capital Cities/ABC, Inc. and The Walt Disney Company. During Mr. Iger’s years with ABC, he obtained hands-on experience in every aspect of the television business—including news, sports, and entertainment—as well as in program acquisition, rights negotiations, and business affairs. He began his career at ABC in 1974.

Mr. Iger was inducted into the Television Academy Hall of Fame in January 2020, and the Broadcasting and Cable Hall of Fame in 2015. He serves on the boards of the National September 11 Memorial & Museum, Bloomberg Philanthropies, and Perfect Day; and as chairman of the capital campaign for the new Academy of Motion Picture Arts and Sciences Museum in Los Angeles. In 2012, Mr. Iger became a member of the Academy of Arts & Sciences, one of the nation’s most prestigious honorary societies, which recognizes some of the world’s most accomplished scholars, scientists, writers, artists, and civic, corporate, and philanthropic leaders.

Mr. Iger is the author of The New York Times Best Seller The Ride of a Lifetime: Lessons Learned from 15 Years as CEO of The Walt Disney Company, published in 2019. He is a graduate of Ithaca College.

Robert A. Iger’s Acceptance Remarks and Conferral of the Award by Lin-Manuel Miranda

LIN-MANUEL MIRANDA: Good evening! It is so wonderful to be back together, in person—Yes! We’re theater people, we need you like oxygen—and to be celebrating a cause that is vitally important, and that is the right of free expression. PEN America and the writers and artists for which it stands are stalwart, fearless defenders of the creative freedoms that make possible great works of art and entertainment. It is an honor to be with you tonight.

Not only must we be able to speak the truth as we see it, without persecution, but we must also be allowed to express who and what we aspire to be as individuals and as a society. We need writers and storytellers to help us imagine all that is possible, and to share that vision with the world. Of course, every storyteller needs someone to believe in their vision, to invest in them and create platforms where their stories can be heard.

Bob’s career has been defined by creativity, humility, and boldness. Under his leadership, Disney has given us fantastic stories like Moana, Frozen, Coco, and Black Panther, and those stories have had a profound effect on our world. Bob Iger wrote the book on gathering the world’s best storytellers under the same Disney umbrella. That’s not a metaphor, PEN Gala: Bob Iger literally wrote a book! It’s called The Ride of a Lifetime, and it’s not about Space Mountain—it’s about Bob Iger! I read it! It’s really good, it’s like a solid airplane read. I read it on one flight. But seriously, one of the themes that emerges in that book is Bob’s willingness to bring artists to the table and talk and talk and talk until everyone’s common goals are in view. That’s a real skill-set that many great artists and collaborators possess: You articulate a vision, and create the conditions under which that shared vision can be realized.

It’s also a priority for Bob to make these stories available and accessible to as many people as possible. Bob helped us bring the stage experience of Hamilton to millions of people around the world on Disney+ at a time when they needed it to be inspired and entertained. This was not the original plan. There is another timeline, maybe in Marvel’s multiverse, where Hamilton is an exclusive Disney theatrical release—that was the carefully negotiated thing, and it was supposed to come out this month, October 2021. And when the pandemic happened and Hamilton’s director, Tommy Kail, and I began talking about, “God, we’re all home, and we’ve recorded it and it exists already. You think they would let us basically throw the contract out and push up the release date so that folks had something to watch during the pandemic?” We went to Bob, curious how he would respond to such a radical shift in plans. He replied with four words: “How about July 4th?” The rest is literal history, and I will forever be grateful to Bob for his flexibility and vision and leadership in making it happen.

And so, it is a pleasure to present this award to Bob Iger in recognition of all that he has done to give artists the voice and the platform they need to tell the important stories that touch hearts, lift spirits, open minds, and hopefully change the world. Ladies and gentlemen, Bob Iger.

ROBERT A. IGER: Thank you very much. The word “humility” is particularly relevant to me right now. I feel incredibly humbled to stand on this stage that giants have occupied all this evening. Henry Louis Gates, thank you very much for your extremely generous comment about me. I hope I can only live up to that description. And thank you, PEN America—I am deeply honored to receive this award from an organization that I respect and admire so much, and whose work has never been more vital, as we’ve certainly learned tonight.

I also want to commend my fellow honorees for your courage, for your insights, for your tremendous impact that you’ve had on our world. And thank you, Nora—or Awkwafina, wherever you are—for being our host tonight, and congratulations on your extraordinary success! I’m so proud to have had you as part of the Disney family, which I know is only going to continue.

One of the great privileges of my career has been the opportunity to collaborate with some of the most talented people in the world, and Lin-Manuel Miranda—you are foremost among them. As anyone who has seen Hamilton can attest, perhaps better than anyone in history, Lin-Manuel Miranda has brilliantly blended words and music to tell complex, stunningly memorable stories. So Lin-Manuel—you are simply amazing, thank you very much! And I’m glad we put Hamilton on July 4th and shared it with the world. He didn’t tell you there was a preface to that, and that is I think I called first and said, “How about it?” and I got a no in about 10 seconds, and then I think they thought about it a little bit more, but whatever.

I actually wish that my own father could be here tonight. He was a voracious reader, and while he made a modest living, he spent what little extra money he had on books. And I think that it’s thanks to him, I fell in love with reading at a very young age, and it really did shape my career, enabling me to appreciate the work of so many great storytellers, who are the true heart and soul of the company that I have actually worked for for almost five decades.

Now I know when people think about Disney, they often think about our movies, our characters, and our theme park attractions, but none of those would exist if it were not for the unforgettable stories our writers—stories that they tell. Their words, that all comes first.

And using the power of our global platform, we are able to share those stories and their corresponding messages of hope and optimism, acceptance, understanding with a broad audience—a global audience—striving to make this world a more better place, a more just place.

So as I prepare to leave Disney after 47 years, one of the things that I am most proud of are the movies that we’ve made that celebrate the rich diversity of our world and just the wondrous beauty of different cultures. Lin-Manuel mentioned a few of them, but I’d also have to add Disney Animation’s upcoming film—yes, this is a shameless plug—Encanto, set in Colombia and featuring all-new songs by Lin-Manuel Miranda.

As Nathaniel Hawthorne wrote, “How potent for good and evil [words] become, in the hands of one who knows how to combine them.” And with this power and the right of free expression comes great responsibility. But sadly, that responsibility is often ignored, as we know all too well in this world.

Indeed, we are witnessing a widespread, callous abuse of this power as vitriol, and the malicious spreading of misinformation is fomenting mistrust, polarization, and a general disregard for the truth. All amplified algorithmically thanks to technology—the same technology that we often point to as a sign of progress. If only technology could be used solely as a source of connectivity and great creativity. But unfortunately, that is not the case today.

Now thankfully, the extraordinary Members and allies of PEN America are working tirelessly to address these and other critical issues, and that’s why I believe it is vitally important that we continue to support their efforts.

Now given all that is at stake, including our very humanity, we cannot stand idly by watching assaults on truth and the decline of civic discourse. We must demand better.

We must work together to mend this divide, fight the perils of contempt, and seek greater understanding and respect, and we must take a stand against the evils of hatred and bigotry and give voice to truth—recognizing that when the ruptures in our society feel insurmountable, as they sometimes do, words have the power to heal and to unite us all.

Thank you very much. I am appreciative and humbled to receive this award, and good evening.