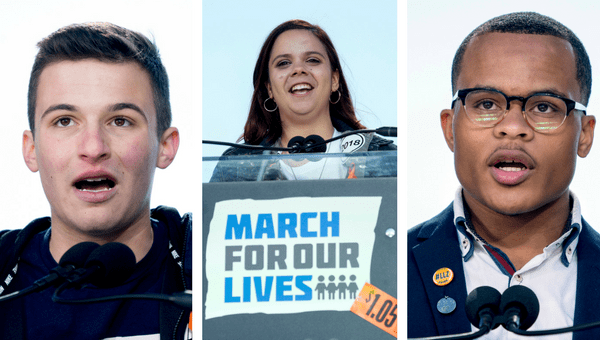 At the 2018 PEN America Literary Gala, PEN America will honor leaders in youth activism against gun violence Cameron Kasky and Samantha Fuentes, students at Marjory Stoneman Douglas High School, and Zion Kelly, the twin sibling of a victim of gun violence, with the 2018 PEN/Toni and James C. Goodale Freedom of Expression Courage Award.

Soon after the shooting that took the lives of 17 of his peers and injured numerous others, Cameron Kasky and a group of his friends convened to launch March for Our Lives. He has since captured the nation’s attention leading rallies, appearing in interviews, authoring an op-ed for CNN, and questioning the NRA support of political figures. A week following the Parkland massacre, Samantha Fuentes, who was shot in both legs and whose face was wounded by shrapnel, sat for interviews despite visible injuries that presented unabashed evidence of the effects of gun violence. During the historic March for Our Lives, Fuentes boldly inspired a crowd to sing “Happy Birthday” to her slain friend Nicholas Dworet.

As part of their campaign, Kasky, Fuentes, and Kelly have forthrightly confronted the outsized impact of gun violence in black, Latino, and poor communities and the hurdles confronting communities of color in having their stories heard and amassing the political power to drive change. Zion Kelly, a senior at Thurgood Marshall Academy in Washington, D.C., is a gun violence survivor whose twin brother, Zaire, was killed on his walk home—by the same man who attempted to rob Zion at gunpoint earlier that night. In a coordinated effort with student leaders from Parkland, Kelly has amplified the discussion of gun violence with respect to class, race, and socioeconomics. He has made multiple media appearances, and has lobbied to effect change to Washington, D.C., law, announcing his family’s proposal of the Zaire Kelly Public Safety Zone Amendment Act of 2018 (expanding both safety zones and the legal definition of “students”) and using social media to urge specific local Council members to vote in a bill that would to lower the Washington, D.C., voting age to 16—giving youth a stronger voice in political discourse.

“We are awed by these students’ bracing and courageous exercise of their free expression rights in the face of crushing personal tragedy. They have used their voices fearlessly to demand substantive change, elevating and unifying the many communities that have been devastated by gun violence. They have galvanized millions in a rising generation to speak out for the first time, withstanding a barrage of attempts to denigrate their authenticity and authority. It is our great honor to recognize them as the recipients of this year’s PEN/Toni and James C. Goodale Freedom of Expression Courage Award.”